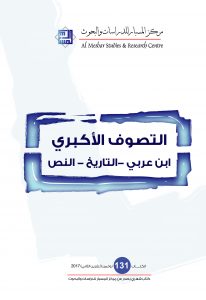 In Al-Mesbar’s 131st monthly book, we share further knowledge of Sufism, popular Islam, and traditional and parallel religiosity — by means of research into diverse Muslim communities, their heritage, and their history. The center’s ongoing study of parallel Islam, traditional religiosity, and Bektashi or Mawlawi Sufism would not be complete without considering the legacy of thirteenth-century Andalusian scholar Ibn Arabi.

Muhyiddine bin Arabi is lately enjoying a resurgence in the region, due to indigenous Arab efforts to foster humanism amid a crisis in human relations. Some Arabs adopt the hope that a climate of tolerance and brotherhood can be restored by reviving Islamic intellectual traditions that embody these principles.

The book calls on the public to use the imagination to develop a discourse of conciliation and compromise, in order to transcend bitter present-day realities toward a higher ideal. By adopting such an attitude, one can find the creative means necessary to challenge rigid interpretations of canonical texts.

Ibn Arabi was a multidimensional thinker whose ideas veered into the esoteric. Yet he reached these realms by engaging the literal meaning of the texts he studied. In this sense, he demonstrated the power of Islamic tradition to broaden horizons.

Ibn Arabi’s writings of and about prayer have profoundly influenced Sufi orders and their literary and philosophical traditions. His explications of love, tolerance, the value of knowledge, and the power of language merit re-exploration today more than ever.

In twentieth-century Egypt, the Muslim Brotherhood called for the burning of Ibn Arabi’s magnum opus, The Meccan Revelations (Al-Futuhat Al-Makkiyya). The Islamist movement, which sought political power by asserting a monopoly over the interpretation of Islam, could not countenance Ibn Arabi’s belief that “the paths to God are as numerous as the breaths of living things” and the “soul must be liberated from prejudice as plaque from the heart.”

The book seeks to shed light on the broader message of Muhyiddine bin Arabi’s Sufism, as well as his linguistic and rhetorical conventions. It traces the relationship between his  writings and the verses of Jalaluddin Rumi and Al-Jami (often described as the “seal of the poets”). The book also shows the relationship between Ibn Arabi’s corpus and the tenets of the Shazili Sufi order, as well as studies of the scholar’s work by Abi Al ̔Ula Afifi and Othman Yahya. It notes, as well, that Ibn Arabi’s intellectual footprint far exceeds the Arab world, as humanists East and West draw inspiration from his intense spirituality and openness to the other.

Ibn Arabi has bequeathed a cognitive theory that “depends on direct perception of the essence of truth.” In his view, the learned are people who seek to determine the nature of truth through knowledge. The mechanisms of cognitive theory, in his view, lie in the heart and the imagination: the eye of foresight, the partial mind, the eye of certainty, and the light of certainty. One of the book’s chapters examines Ibn Arabi’s views of philosophy. It shows that the scholar distinguished between the wisdom of “philosophers” and the wisdom of “the people of taste” in terms of how they grasp “the detailed as a whole” and “the whole detailed.”

Al-Mesbar Center would like to thank all those who participated in the book, especially Khaled Abdo and Omar Al-Bashir Al Turabi, who coordinated its production.