The Arabian Gulf and the Arab Spring: Religion and Policy 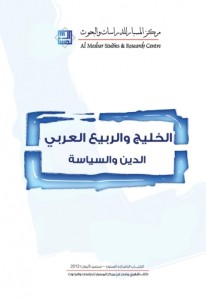 In its 69th monthly volume, Al-Mesbar Studies and Research Center examines the effects of the “Arab Spring” on Islamists in the Gulf, especially in Bahrain and the United Arab Emirates, and how Salafists in Saudi Arabia and other countries are adapting to the changes. The issue includes questions about Qataris’ adoption of Wahhabism and a study on how Iran deals with and invests in the Arab protests. This issue also studies Gulf social cohesions and highlights new thinkers in Gulf. Shafeek Al-Ghaira conducts a study examining the Kuwaiti model of social cohesion in Gulf states in 1990 and then documents the stages of Kuwaiti society formation with social movements after the Arab Spring. Ghasan Al-Shehabi studies the Arab protests’ impacts on Bahrain, focusing on the opposition activity. Furthermore, Yasser Ba’Amer explains the confusion of Salafism with what is known as the “Change Project in the Arab Spring.” Researcher Mansour Al-Nakeedan highlights the Qatari project proposed by Prince Sheikh Hamad Bin Khalifa Al-Thani in December 2011—through which Qatar intends to publish the teachings of Sheikh Muhammad Bin Abd Al-Wahab and to propagate Wahhabism. In addition, Abdullah Bin Bijad Al-Otaibi writes about the events in the United Arab Emirates and explains the Muslim Brotherhood’s role and ambitions, including the Muslim Brotherhood’s secret organization in Gulf. The issue also includes an article written by Brian Fishman on terrorist indicators in Syria. Finally, there is an article written by Philip Mudd on the transformation of U.S. terrorism strategy and the shift from a focus on local activity to international activity.

The Pandemic: Developments in Society, Politics, and the Economy