The Brotherhood and Iran: Using Religion to Wage a Political Battle 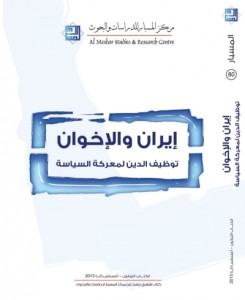 In its 80th monthly book, the Al-Mesbar Center probes the intellectual, political, and structural relationship between the Muslim Brotherhood and Iran’s government of clerics. Scholars from diverse backgrounds, through a combination of historical research and present-day investigations, have found a significant degree of mutual understanding and cooperation between these two powerful movements of political Islam, not to mention enormous mutual admiration.

An introductory paper by Saudi Islamist affairs specialist Abdullah Bjad al-Otaibi sets the table: He demonstrates that in words as well as action, the two groups have been able to cross the dividing lines of politics and sect in the name of acquiring and consolidating political power, the overarching goal to which they strive. In this context, Otaibi finds religion itself to be little more than a weapon which the two cliques employ in pursuit of their political objectives. Though one cannot deny that centuries of Islamic history impose limits on the degree of trans-sectarian partnership that is possible, more recent history shows that commonalities between the two movements outweigh the disparities. These commonalities, moreover, begin at the source: both movements drew inspiration from the teachings of 19th century intellectual and ideologue Jamal al-Din al-Afghani, and there is a high degree of intellectual overlap between Safavid Shi’ism and the legacy of Khomeini on the one hand, and the Sunni Islamist ideals of Sayyid Qutb on the other.

A study by Redouan al-Sayyid, professor of Islamic studies at the University of Beirut, draws a conceptual parallel between the Iranian Khomeinist concept of the “Wilayat al-Faqih” (“Rule of the Muslim jurist”) and the Muslim Brotherhood’s “Supreme Guide.” The collapse of the Sunni Ottoman caliphate opened the door both to a new vision of pan-Sunni Islamist leadership by the Brotherhood and to new messianic hopes for the emergence of the Shi’ites’ “hidden Imam.” Islamic tradition was used to lend legitimacy to these modern concepts: Muslim Brotherhood founder Hasan al-Banna memorably told his followers that “Islam is both religion and state,” and in so doing justified the establishment of an organization whose members felt religiously obliged to assume political authority. Meanwhile, the Khomeinist concept of an Islamist state flowed organically from the hierarchical authority which Shi’ite Islam has always vested in a senior religious leader. Thus the organization which the Sunni Brotherhood constructed to assume power was the counterpart to a new form of Shi’ite political authority embodied in the persona of a cleric.

Lebanese sociologist Khalil Ahmed Khalil delves into the intellectual disparities between Sunnism and Shi’ism on the one hand, and the two Islamist movements’ pretenses to leadership of their respective sects on the other. Also in this volume, Syrian writer Muhammad Jamal Barud homes in on the case of Shi’ite Islamism in Lebanon, and whether it is ever really possible to reconcile Arab Islamism with deference to an Arab nation-state. The answer he finds is essentially no: In Egypt, for example, neither supporters nor opponents of the Muslim Brotherhood see the movement as compatible with the idea of an Egyptian nation. Iran’s government of clerics, in the eyes of many Arabs, is politically organized sectarianism — and does not fit into the borders of the Iranian state. Neither Iraqi Shi’ites nor Syrians particularly care to emulate it as a model. Hizbullah appears in this context to be a truly aberrant phenomenon.

Professor Abd al-Husayn Sha’ban of Beirut’s University of Non-Violence for Human Rights (AUNOHR) contributes a paper on the tension between violent and non-violent Islamist activism since the Arab revolutions. It compares the experiences of Egypt, Iran, Turkey, and Tunisia. Sha’ban brings to bear his own perspective: While proponents of violence are transparent about their objectives, in his view nonviolent Islamists are inherently opaque, outwardly engaging the language of democracy and pluralism but inwardly regarding the rhetoric as merely a means to achieve a monopoly on power. The author foresees a new stage in the post-revolutionary Arab states in which the conflict between Islamists and secularists is supplanted by an intra-Islamist conflict: While one faction comes to truly embrace the principles of civil society, as in the case of the Turkish model, another will maintain today’s anti-democratic approach and perhaps regress further into the past. This clash, in Sha’ban’s view, will claim a heavy toll on Islamism throughout the region.

The next contribution comes to us from Muhammad Muhsin Abu Nur, an Egyptian scholar at Al-Azhar University in Cairo specializing in Iranian-Egyptian relations. He evaluates the interplay of the Brotherhood and the Tehran regime between 2011 and 2013 in terms of three pivotal issues. The Brotherhood and Tehran have much in common in terms of the first two of the three: Gulf security, where the two movements share an adversarial attitude toward the GCC states; and the Israeli-Palestinian conflict, in which Tehran and the Brotherhood come together in support of Hamas. But the two groups find themselves working at cross purposes in Syria, where Tehran supports the Assad regime and the Brotherhood stands staunchly with the rebels. Abu Nur shows how Tehran and the Brotherhood continue to make common cause wherever possible, despite deep rancor over the Syrian issue.

Haytham Mazahim, a Lebanese intellectual historian, traces the evolution of internal divisions within the Brotherhood as well as Iran’s revolutionary clerics. For the Brotherhood, today’s internal schisms were born out of a tragic setback for the movement: the assassination of founder Hasan al-Banna in 1949. For the Iranian revolution, the divisions were borne of triumph: It was after the clerics took power that tensions began to emerge over the degree to which an Islamized state and society should open up to the outside world.

Rita Faraj, a member of the Al-Mesbar Center’s editorial board, contributes a comparative study of the concept of trans-sectarian “Islamic unity” as espoused by Brotherhood founder Hasan al-Banna and Ayatollah Khomeini. Both find it relatively easy to call for “unity,” in her view, because neither allows himself to be bogged down by the highly complex and nuanced differences between Sunnism and Shi’ism. Returning to Jamal al-Din al-Afghani, a recurring figure in this volume, Faraj traces the inclination toward “Islamic unity” to values which both movements may have gleaned from Afghani’s teachings. These include, for example, a belief that the Muslim faith as a whole faces two external enemies: Western imperialism from afar and tyranny at home.

The next study was prepared by Lebanese author Hani Fahs, who is both a lay intellectual and a mosque cleric. It is a “think piece,” concerned in its own way with the challenge of fostering Islamic unity, that finds the crux of the challenge to be how to bridge the gap between Muslim scholars and Muslim rulers. Fahs, too, offers the example of Muslim scholar Jamal al-Din al-Afghani, and compares the legacy of his ideas with the rhetoric of Sultan Abdel Hamid II, the one of the last Ottoman caliphs. Though the two were separated by space and time, Fahs finds that they shared an instinctual desire to bridge the sectarian gap — and their analogues today in the realm of intellectual life and politics, respectively, should come together and fill in each other’s missing pieces.

This month’s “special paper,” prepared by Al-Mesbar Center editorial member and Sudanese national Omar al-Bashir al-Turabi, is a review of the book Iran and the Muslim Brotherhood, published by Jadawil publishers this year. Taking stock of its contents, Turabi concludes that Islamism’s diametrically opposed intellectual streams — those that call for a return to the fundamentals of Islam versus those calling for progress toward enlightenment and modernity — are actually two sides of the same coin. The debates they presume to engage in are an intellectual veneer for the hard politics that lie underneath — and in this deceptive realm, very little divides Shi’ite Islamists from their Sunni counterparts.