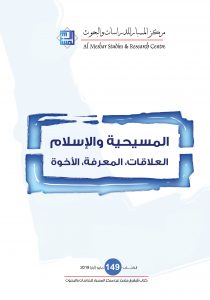 The Al Mesbar Studies and Research Center, in its 149th book, Christianity and Islam: Relations, Knowledge, and Brotherhood, published in May 2019, examines the roots of interfaith understanding, specifically between Christians and Muslims, and traces the relations between them from an early age until present day. It highlights the deeply rooted brotherhood that has grown throughout their history, as well as the critical milestones, convergences, and tensions along the way.

The transmission of knowledge between Islam and Christianity has known many forms, from dialogue and debate to scientific specializations within the universities of Europe and the wider world. There are few fields that could rival the knowledge specialization of Orientalism, which is a problematic and somewhat controversial point of reference. Nevertheless, it contributed much in its study of Islam. The book works to trace the emergence of classical Orientalism, its developments, its methods, and its conception of Islam, from its earliest inception and resulting developments, to the goals and the milestones of what is known as the “Revisionist school” of Islamic studies.

The book seeks to investigate a basic premise in Islamic-Christian relations–viewed as a cultural-social state linked to civilization rather than to text, creed, or “violence.” Relations between Christians and Muslims have been affected by political tensions and wars that have burdened knowledge structures, weakened avenues of convergence, undermined the foundations of acquaintance, and imprinted stereotypes and negative effects on both the collective consciousness and unconscious. This can be readily seen from the emergence of Islamophobia and the intimidation and politicization which so often accompany efforts to address it.

Christianity and Islam: Relations, Knowledge, and Brothers studies Muslim-Christian religious controversies from the prophetic era, through the Umayyad and Abbasid Caliphates, to the relatively peaceful period of coexistence in Andalusia, and the spasms of periodic political tensions and conflicts. Despite the invocation of radical texts, the possibilities of dialogue opened during the Andalusian experiment remained valid, with the recognition of the extremes of dissonance produced by tension and competition.

One study, titled “Christianity and Islam: The Shared Stereotypical Image an Entryway for Multiple Religious Problems,” argues that tolerance is not linked to the political situation, but rather to the social consciousness of both the religious and political situation. Therefore, there exists a theoretical basis that raises the problem that religious pluralism might be more expansive compared to the ideological unification of the three Abrahamic faiths. This hypothesis remains a debatable point of view and accepts opposite views.

The book deals with Islamic-Christian relations, their impact on historical events as well as their effect on cultural, religious, political, and cultural awareness. Perhaps the two most important events which left painful impressions in the memory of Christians and Muslims are the Muslim conquest of Constantinople, a city of great religious importance and the capital of the Byzantine Empire, in 1453, followed by the Reconquista, which ended with Muslims’ expulsion from the Iberian Peninsula, and the fall of Andalusia, in the Middle Ages (711-1492). The studies seek to analyze the representations of Christianity in Islamic thought, and the views on Islam in Christian thought based on these two events along with their preceding historical events and subsequent repercussions.

Tensions had a negative impact on Islamic-Christian relations, leading to confrontations between followers of the two religions, and reduced the level of tolerance and frequency of encounters with the Other. The tone of religious texts grew more hostile and was directed to stoke mutual marginalization and promote hostility. However, this did not prevail throughout. In both instances, there were spaces for the two sides to develop mutual familiarity, especially in invitations to debate instead of clash on the respective shores of Christianity and Islam.

Among the exemplars in this context are the Spanish theologian John of Segovia, and the German theologian Nicholas of Cusa. Numerous studies have noted that the understanding of Islam in European literature began to change at this time, with the image of the Prophet Muhammad and the system of Islamic belief grew increasingly positive and open in Christian thought. This came into full fruition in the era of the Enlightenment, when scholars took up the call to understand the Prophet and Islam in their capacity as religious thinkers.

In a study of the contributions made by Arab theologians to the scientific approach to Islam, the book addresses the efforts of Father Joaquim Mubarak. A scholar of Islam and theology, his work deserve special attention on two principle axes: his perspective on the Abrahamic origins of Islam and his critical remarks on how the Second Vatican documents (1962-1965) view Muslims now.

The book also analyzes Islam’s place in these documents, especially the “Statement on the Relationship Between the Church and non-Christian Religions” (also known as the Nostra Aetate), and touched on relations between the Vatican and the Islamic world. It concluded that the signing of the “Human Fraternity Document for World Peace and Coexistence” in February 2019, during a meeting hosted in the UAE capital of Abu Dhabi, between the Grand Imam Dr. Ahmed El-Tayeb and Pope Francis, opened a new horizon for the relationship between the two religions.

The most important vital issue facing Muslim-Christian relations is an awareness of the state. This is an issue that the Muslim Brotherhood has hastened to address with an approach that seeks to exploit religion for use in political conflicts and raises concerns about the future of religious minorities. Such an approach, among other things, threatens the concept of citizenship in which citizens are equal in rights and duties, and creates an ideological rift between Muslims and Christians.

The book also discusses relations between Muslims and Christians from the perspective of citizenship, which has become the constitutional and legal framework of the modern national state. It examines the particular cases of both Egypt and Lebanon and the contrasting legacies of the Millet system imposed in the Ottoman period, and systems that seek to convert Christians to second class citizens as promoted by the ‘Islamists.’

Tolerance hinges upon the future rather than to the past, but reaching into this future requires us to look towards history, to draw lessons from it, to give the dreamers of our age a better future to ponder, and a wealth of wisdom that can bridge the chasms between faiths and peoples.

In conclusion, Al-Mesbar Center would like to thank all the researchers involved in the book, especially colleague Rita Faraj, who coordinated the issue with her colleagues, and we hope that work, and the team’s efforts, will meet your expectations.