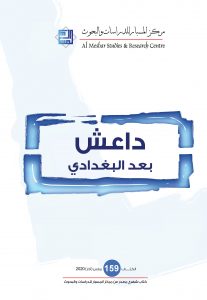 In its 159th book, Daesh after Al-Baghdadi (March 2020), Al-Mesbar Studies and Research Center explores ideological developments and transformations by ISIS (the Islamic State of Iraq and Syria) — otherwise known as Daesh — as well as the impact on its organizational cohesion, especially following the death of its former leader, Abu Bakr al-Baghdadi. The studies contained within the book present new interpretations of Daesh, focusing on its theatrical deployment of violence; analyzing the organization’s ideological roots and impact on its structure; and offering a study of strategies to contain and degrade the group’s capabilities over the medium term.

Daesh after Al-Baghdadi analyzes the difficult ideological odyssey which the organization undertook in its turn between the ideology espoused by Sayyid Qutb and the Salafist Jihadism of al-Qaeda. Subsequently new ideological currents were established within Daesh’s conceptual universe, competing with each other in extremism and heterodoxy. Hence, the “administrators” of the organization attempted to enforce control over the rank and file by killing more than a thousand ultra-extremist members. Though the repercussions of these internal schisms have yet to fully play out, the book examines their contours and outlines possible future developments, including the emergence of new groups, which may adopt even more extreme ideologies in order to inaugurate a new era in the history of terrorist groups.

Debates over takfir — that is, the practice of branding others apostates — arise within Daesh before the death of its leader and have continued after him. New terrorist theoreticians have emerged advocating even more violent approaches than their predecessors. Some of these consider takfir to be a fundamental element in their religious practice, and brook no dissent. This development coincides with the most intense struggles within the organization to roil the level of its activist base since its founding years as the “Tawhid wa ‘l-Jihad Group” in 2003.

One of the book’s studies highlights the effect of the conflicting currents within Daesh and probes the possibilities for their escalation. These have undoubtedly increased in light of the confusion afflicting the jihadi core after al-Baghdadi’s death, indicating an organizational fragility, and the weakening of its claim to ideological solidity. Even the possibility of such a crackup has given rise to a deep uncertainty among researchers of the Islamist phenomenon concerning the potential fragmentation of the jihadist movement, and a corresponding decline in its ability to overcome crises.

At a deeper level, the book seeks to answer a basic question: how did Daesh move from a territorial caliphate to an informational network? The organization’s loss of its territorial state imposed a change in its strategic vision for confrontation, expansion, and segmentation into more violent cells, rendering excessive centralization a burden to be cast off. As one study shows, the strategic shift that Daesh has experienced, and its transition from a territorial Caliphate to a brittle and thrombotic one, has crystallized into a permanent shift dictated by new realities.

The book examines how Washington has dealt with terrorist movements from the events of September 11, 2001 until the death of al-Baghdadi. It seeks to explain points of convergence and divergence, and puts forward a set of assumptions that were reflected in the field as of late 2019 and early 2020. These include one scenario for the rise of new Daesh hotspots, or an upsurge in terrorist organizations along lines of regional cleavage and political tension, as was the case in the Libyan, Syrian, and Somali experiences. In addition, there is also the possibility of Daesh experiencing a resurgence in Iraq, exploiting the fragility of the Iraqi state and the ongoing American-Iranian conflict in the country.

Daesh after Al-Baghdadi also presents testimonies from those who lived in territories seized by Daesh in Iraq and Syria. They detail the atrocities, injustices, and aggression committed by the group, as reflected in their personal experiences of women and men. In addition, the book poses the following questions: did Da’esh alter its media strategy and reinvent its methods of promotion on social media following al-Baghdadi’s death? Or did it merely modify its operational tactics and rearrange its rhetorical style? What is the granular reality of Daesh’s war media? What is the extent of the impact of the military defeats on its liberation plan? Has the loss of a territorial caliphate and the death of the presumed caliph entailed a change of strategy or merely tactics?

The death of Qasem Soleimani, the commander of the Quds Force, on January 3, 2020, dealt a painful blow to Iran and its proxy militias. How did that escalation threaten the US-Iranian relationship in Iraq? Will the theater of direct confrontation between America and the Revolutionary Guards become one of the reasons for the return of Daesh? The book offers possible answers to these questions, and analyzes the new posture Daesh might assume in the post-Soleimani era.

Finally, one of the essays reviews Daech: la Suite by the French political science professor Sébastien Boussois. This essay assesses the risks posed by fighters returning from Daesh’s ranks following its territorial implosion, and the security threat they pose to European and Arab countries.

In conclusion, Al-Mesbar Studies and Research Center extends its gratitude to all the researchers and participants in this book, especially towards its colleague Maher Farghali, who organized this volume.

Islam and Terrorism: Models of Mrabet and Macron

Radicalisation and Radical Groups and in South-East Asia

Peace, violence and Holy War according to the Qur’ān