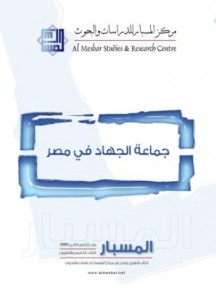 In its 25th monthly book, Al-Mesbar Studies and Research Center sheds light on Egypt’s “Jihad Organization,” tracking the changes it underwent regarding its references, conducts, and concepts. Kamal Habib, founding member and former leader of the Egyptian Islamic Jihad, goes back to the establishment of the Islamic Group by Mohammad Abdel Salam in the 1970s. Mustafa Lotfi examines the transformation of the enemy in Egyptian Islamic Jihadic thought. Ref’aat Sayyed Ahmad focuses on Egyptian Islamic Jihad’s stances regarding other Islamic groups in Egypt. Abdulrahaman Mohammed tackles the shift from Egyptian Jihad to Al-Qaeda by tracking many Afghani members of the Egyptian Islamic Jihad who joined Al-Qaeda. After reviewing the controversy over the Jihad’s revision process, Abdel Moneim Munib, former leader of the Egyptian Islamic Jihad, examines the possibilities of integrating the group’s members into the public domain. Niza Gharib poses an essential question: Who is representing the group now? The issue’s study is conducted by Jamal Al-Banna, who sheds light on a duty disregarded by Egyptian Jihad and other fundamentalists. The monthly book, Revisions not Renunciation by Tarek Al-Zamer, is reviewed by Mustafa Ashour.