Egypt’s Islamists After the Revolution of January 25 – part 1 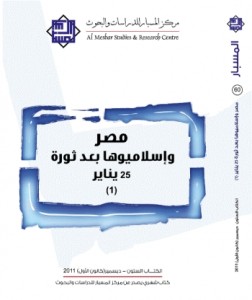 In its 60th monthly book, Al-Mesbar Studies and Research Center examines Islamists’ participation in parliament as parties for the first time. Egyptian parliament, elected democratically for the first time after the Egyptian revolution, surprised all as Islamists won the majority of seats—which clearly reflected the Egyptian society’s Islamic attitude. Egyptian affairs are nowadays governed by the Military Council on the one hand and Islamists who won the majority of parliament seats in the last elections—reaching 60 percent—on the other hand. Al-Mesbar Center deals with this big event through analysis, detection, and explanation. Muhammad Helmi examines the repercussions of the Islamists taking over authority. Muhammad Shouman looks at the media and its role in the revolution and the Muslim Brotherhood’s influence on it. Sameh Fawzy discusses the concept of the state for the Muslim Brotherhood and the history of the relationship between the Muslim Brotherhood and the Copts since the Al-Banna period and after the revolution of July 1952. Omar Al-Turabi reviews the monthly book, Egyptian Revolution 100% by Hossam Muhammad Hussein. The edition file examines the external Turkish policy; Sfanti Korneel asks what moves Turkish foreign policy, and he draws attention to the changes in Turkey and transformations of Erdogan’s approach after events and politics made him violate his “zero problems with neighbors” rule.

The Brotherhood in Diaspora: An Introduction to the International Organization

Pathways of Tolerance in Islam and Christianity