Fatwas in the Gulf and the Muftis Who Make Them 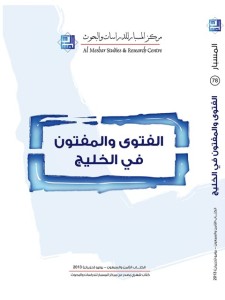 Studies of people of faith too often overlook one of the most powerful forces in their lives: the religious edict. In Islamic tradition, an edict is known as a “fatwa,” and has been for centuries the principal means by which spiritual leaders influence their followers and, by extension, the society around them.  Understanding the significance of fatwas entails a journey through Islamic history and politics — a journey for which this 78th volume of monthly scholarship from Al-Mesbar Center provides a guide. The book focuses specifically on the phenomenon of fatwas in the Arabian Gulf, where their impact has been profound.

The first study in the volume, “The Fatwa: Between Advice and Compulsion,” was penned by Ra’id al-Samhuri, a scholar of Islamic intellectual history and member of Al-Mesbar’s editorial board. He argues that, contrary to an assumption shared by Muslims and non-Muslims alike, a fatwa is not a religious ruling but merely a source of information and advice. It is intended to serve as a formal expression of intellectual reasoning by the mufti — that is, the person who issues the fatwa. Samhuri presents seminal Islamic texts that support his argument, demonstrating that the relationship between the mufti and the mustafti (a person who seeks a fatwa) is based on choice: The fatwa’s value is a function of the mustafti’s trust in the mufti, and the mustafti has the right to adhere to the views of whichever mufti he or she chooses.

The next study, by Saudi writer and researcher Tarif al-Sulayti, deals more specifically with fatwas in the Kingdom of Saudi Arabia. They serve, in his view, as a currency of political as well as spiritual authority. He explains the significance of the fact that Saudi fatwas follow Hanbalism, the most conservative of the four schools of Sunni Islamic law, then distinguishes Hanbalism as it was originally construed from Hanbalism as defined through the newer ideological overlay of Saudi Wahhabism. Sulayti also shows that despite the fact Saudi clerics are largely unified under one school of Islamic law, they still operate as individuals, differing from one another in outlook and style of argumentation.

The next paper in this volume, also focused on Saudi Arabia, partly supports Sulayti’s conclusions. Dr. Abdullah bin Ibrahim al-Tariqi, head of the department of Islamic legal policy at the High Institute of the Judiciary in Riyadh, opines that Saudi “Hanbalism” has surpassed the original Hanbali school of Islamic thought, rescuing it from its rigidity. Tariqi finds that Saudi Hanbalism has revived the spirit of Ijtihad — a cleric’s endeavor to divine God’s law from the Qur’an and prophetic traditions without relying on other clerics. He finds support for his argument in the writings of Ameen Rihani, a Lebanese American intellectual and one of the early theorists of Arab nationalism. Tariqi paints a portrait of Wahhabism as dynamic and inherently political.

From Saudi Arabia, the volume moves on to Kuwait: Talal Sa’d al-Rumaydi, a Kuwaiti writer and scholar, provides an overview of the social history of fatwas in his country, where the population has always been devout by nature. Rumaydi examines the history of the administrative position known as “Qa’imaqam” — an officer appointed by the Ottoman empire to oversee the local Islamic courts. Some of the muftis who assumed this role, he observes, did little more than resolve conflicts among other clerics. Rumaydi provides an example, as well, of the sweeping socio-economic impact of some fatwas on Kuwaiti society: One year, the pearl diving season — the undersea harvest which Kuwait’s pre-oil economy depended on — coincided with the holy month of Ramadan. Pearl divers faced the dilemma of whether to abandon their posts, to the detriment of their livelihoods, or violate the holy month and imperil their fate in the world to come. Clerical elites in Iraq, Mecca, and other cities were asked to weigh in, and their answer was to ban the practice of pearl diving for the month.  The pearl divers followed their advice, and the country’s economy deteriorated as a result. Rumaydi notes that Kuwait’s indigenous clerics did not weigh in with their own views, apparently reluctant to bear responsibility for the outcome. In capping his research, he also observes in passing that sometimes in Kuwaiti history, the authorities exploited unofficial fatwas for political purposes.

Does the situation in Bahrain differ from the situation in Saudi Arabia and Kuwait? Bahraini researcher Abbas al-Murshid shows in his study that Bahrain is unique among the Gulf states, as far as fatwas are concerned, in three respects: First, there is no official designation of a “grand mufti.” Second, though there are official religious institutions — notably the Awqaf, or religious endowments — these institutions have not specifically designated a department for the issuing of fatwas. (Fatwas in the country are primarily produced by the Islamic legal court system.) Finally, Murshid observes that the oversight of Bahraini fatwas is handled not by a religious institution but by the civil administration of the central government itself. The author also points out that Bahraini fatwas are more diverse than those of other Gulf states, owing to the mixed sectarian makeup of the country.

Regarding the fatwa and its relationship with politics, Rashid al-Khayyun, a scholar of Islamic philosophy, examines a selection of Shi’ite fatwas that proved politically and socially influential at the time they were issued.  Some opposed the formation of political parties while others permitted them. Some denounced imperialism, constitutional government, or parliamentary bodies, while others acquiesced to them. Khayyun’s choice of Shi’ite fatwas for scrutiny is a valuable contribution to this volume, so much of which concerns Sunni-majority states and clerical communities. The author’s observations about these particular fatwas are just as relevant, moreover, to their counterparts in the Sunni Islamic world.

The next study, by Omani researcher and writer Khamis bin Rashid al-Adawi, concerns the creation of fatwas in the Sultanate of Oman. Adawi sees potential for the institution of fatwa-writing to contribute to the social development of the country. The text of fatwas can become a platform for critical thinking about religion, reconciling divergent viewpoints, and re-imagining religious exhortation. Anything less, Adawi believes, would amount to stagnation. Adawi’s paper also offers a window into the social context of his ideas: In Oman, the production of fatwas is a part of the machinery of state. At the same time, the state grants a modicum of independence to the fatwa writer, in accordance with Omani tradition, and refrains from intervening in his deliberations. Fatwas in Oman do not concern themselves with politics, though the mufti is permitted to express his political views informally, outside his official capacity.

In publishing this volume, Al-Mesbar Center aims to provide an overview into past and present realities of fatwas in the Arabian Gulf — and a sense of their longstanding social and political impact.  We hope that it will serve to encourage more granular scholarship on the subject.