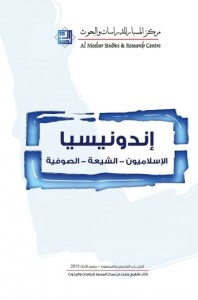 In its 75th monthly publication, Al-Mesbar Studies and Research Center continues its exploration of Islam in Indonesia, with a special focus on the phenomenon of “Islamization” and the use of Islam as a political tool.  It examines the so-called “Liberal (Free) Islam Network” (LIN) in Indonesia, the diverse practices of the faith as a whole, and the country’s special history of fostering tolerance and co-existence — both within the society and in the country’s relationship with foreign powers.  The volume also reviews the history of Sufism and Shi’ism in the country. Viewed together, these subjects provide an overview of a fascinating model for religious pluralism.

The first study of the volume, “The Beginnings of Indonesian Islamization,” is the work of Ali Muhi ‘l-Deen Al-Alusi, a professor at Thamar University in Yemen.  Alusi presents a historic overview of the factors that contributed to Indonesian Islamization since the dawn of the faith.  He shows that commerce — not military invasion — was the most important means through which the religion spread.  There had been active trading among the islands of the Indonesian archipelago, extending far beyond its waters to China, India and Arabian Gulf.  Ties of friendship through profitable commercial dealing became a channel for the free exchange of ideas, and many Indonesians were compelled by Islam’s proposition as a “deen,” or “life system.”  In addition to narrating the history of Islamization in Indonesia, the study also deconstructs ideological narratives of the subject now being advanced by Islamist parties.

Moving forward in time, the next study comes to us from Dr. Bouhnia Goui, professor of political science at the University of Ouargla in Algeria.  He parses Islamist trends in Indonesia today, with special attention to the radical streams and their stance on the state-sponsored efforts at “modernization.” Goui argues that it is impossible to separate the relationship of political Islam and democracy on the one hand, from the relationship between Islam and the state.  He illustrates the inherent tension between political ideologies of Islamism and the “Five Principles,” a sort of official “mission statement” which has been used to define the Indonesian state.  There is inherent tension between proponents of the two.  Goui notes that the vast majority of Indonesians are Muslim and follows Sunni tradition — but for them, as well as for the country’s non-Sunni Muslims, beliefs about the role of Islam in government differ widely. Like their fellow Muslims elsewhere in the region, Indonesians nonetheless share a desire to apply Islamic principles, in some form, to the political system.

One can’t talk about Islamic streams in Indonesia — or elsewhere, for that matter — without understanding the impact of the ideology of the Muslim Brotherhood. This subject is addressed in the book by Dr. Kamal al-Din Nur al-Din Marjuni, head of the “Da’wa” (i.e., Islamic proselytization) department at the Islamic University of Malaysia.  The paper notes the deep roots of the Muslim Brotherhood in Indonesia; its ideology first appeared on the archipelago generations ago. The Brotherhood played an important role in the struggle for Indonesian independence.  Its largest manifestation today is the “Prosperous Justice Party,” which grew on the foundation of the Muslim Brotherhood’s longterm efforts to educate and inculcate the population. Marjuni’s study shows how the writings and teachings of the Brotherhood’s leading ideological voices — Hasan al-Banna, Sayyid Qutb, Yusuf al-Qaradhawi, and others — were translated and distributed.  He notes the prominence of Qaradhawi’s work in Indonesia today.

Dr. Luay Abd al-Baqi, director of the Hikma Institute for Arabic and Islamic Studies in Liverpool, Australia, has chosen to study Indonesia’s “Liberal Islam Network” (LIN).  It is an intellectual forum, with chapters across the country, concerned with discussing and disseminating the concept of “Islamic liberalism.” Abd al-Baqi breaks down phases of the group’s development as a cultural and political stream that opposes militant ideologies in the country.  He finds that foreign financial support, though a vital resource for any political group in the region, has been the principal reason for the group’s failure.  Strident Islamist groups have used the fact the LIN receives foreign funding to cast suspicion on the group and marginalize it.  Muslim liberals in the country recognize this problem and are struggling to address it.

The author shows how the LIN has crafted itself as more an ideological stream than a political party, trying to persuade Indonesians with differing politics that its ideas are the only rational, moderate, and non-Western approach to countering the spread of extremism.  It has achieved a modicum of media success, earning it sympathy among some political parties — particularly those representing minorities and secularists — and enabling it to reach beyond the borders of Indonesia to garner financial support.  But these very gains have come at the expense of its ideological credibility as an authentically “Islamic” movement. Most Muslims in Indonesia, and Southeast Asia broadly speaking, view “liberal Islamic” organizations with suspicion.  Many viewing the tenets of liberalism as heresy.  LIN will face great difficulties in addressing the large gap that separates it from most Indonesian Islamic communities.  Hopes at the present time are largely pinned on LIN’s outreach to more longstanding moderate groups, in particular the Nahdlatul Ulama and Muhammadiyah organizations, which have maintained their Islamic identity and esteem throughout the history of modern Indonesia.

In the next study, researcher Muhammad Abd al-Fattah, himself an Indonesian Islamist, examines the life story of one of the most prominent figures in Indonesian Islamism: Abu Bakr Ba’asyir.  The study chronicles Ba’asyir’s intellectual and political evolution, from his early activism to later ties to Al-Qaeda and successive arrests.  Abd al-Fattah sheds light on the social context in which Ba’asyir made his political choices and became involved with terrorism.

Dr. Anis Taha, an associate professor at the International Islamic University in Malaysia, specializes in Sufism, Islam’s mystical strand.  His contribution to this volume traces Sufism’s arrival and early development in Indonesia and the great extent to which Indonesians embraced and continued to spread it.

Muhammad Awawda, for his part, has conducted a study about the Shi’ites of Indonesia. He notes that the Iranian Shi’ite Islamist revolution in 1979 elevated Shi’ism’s profile and importance in Indonesia.  Awawda shows that Shi’ites in Indonesia have developed organizational, educational, and media tools to make the case for their views in the broader population.  The study also examines the presence of Hezbollah and other transnational Shi’ite groups on Indonesian soil.

In each monthly volume, Al-Mesbar Center also publishes a “study of the month” on an entirely different topic.  This month’s piece is by Nuri al-Jasim, a researcher specializing in Sufism and interfaith dialogue.  The paper examines the relationship between Sufism and politics, taking Jasim’s native Iraq as a case study, and includes an exploration of the Sufi bay’a, or “pledge of allegiance.” It investigates the relationship of Sufism with Islamist movements, and how and why the two have come to blows.

Islam’s Presence in the Malay Archipelago: the Cases of Indonesia and Malaysia — is a new book by Dr. Ghaythan bin Ali bin Jrays, with support from researcher Mohammed Awawda. The book highlights Islam’s many contributions to Malaysia.  Arabs invented a method for writing the Malaysian language — until then mainly an oral language — and taught the Arabic language to a great many people in the Malay Archipelago.  Arabic culture has also had a significant impact on culture and literature in the country, notably poetry and short fiction. Islamic education played an important role in remedying the educational deprivation Malaysians suffered under Hindu authoritarianism.  Muslim countries in general have been supportive of each other politically, economically, socially, culturally, and intellectually, due to their sense of connectivity via their shared Islamic faith.  The advent of Western imperialism played a role in altering this dynamic, bringing new politics and conflicts which Muslims endured until waging their jihads for independence.

This issue was coordinated with dedication by Jordanian researcher Mohammad Awawda. He has our full gratitude and sincere appreciation.