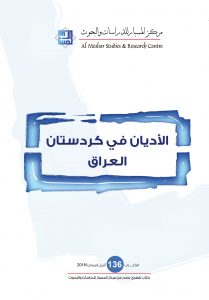 Al-Mesbar’s 136th monthly book explores the religious and sectarian diversity of the area. In addition to Sunni and Shi’ite Muslims, Iraqi Kurdistan’s religious map includes minorities belonging to the Sabea-Mandeans, the Kaka’is (Yarsanis), the Yezidis, the Baha’is, and the New Zoroastrians. The Jewish and Christian presence in Kurdistan meanwhile dates back millennia.

The need for mechanisms to manage religious pluralism and promote civil peace and interfaith coexistence is felt by many of the region’s leaderships today, after painful historical experiences from which lessons have been drawn. Wars, political upheaval, and cultural regression have wounded the area’s historically diverse social fabric. In addition to the instant causes of war and civil strife, a long history of hostile discourse toward minorities and rejection of the principle of equal citizenship carry much of the blame. In addition to the great vanishing of Jewish and Christian communities in Arab lands, the region has seen the persecution and waning of Sabean-Mandaeism, Yazidism, and Bahaism — especially in Iraq after 2003, a major turning point in the region’s modern history.

The book examines the current state of Sabean-Mandaeism, Kakaism, Yazidism, Bahaism, Zoroastrianism, Judaism, and Christianity, in Iraqi Kurdistan. The local history of Sabean-Mandaeism dates back millennia. Some of its adherents came to the area fleeing persecution elsewhere. Those who remain today are primarily settled in Erbil and Sulaymaniyah. The same areas also host adherents to Kakaism (Ahl al-Haq), a widespread minority faith among Kurds which has puzzled historians about its origins and roots. One of the book’s studies shines a light on the community, its relationship with Islam, and its historical and contemporary challenges.

Yazidism attained global attention after ISIS invaded Sinjar (Southern Kurdistan), where the terrorist organization held Yazidi women as sex slaves, kidnapped men, and killed children. Yazidism is one of the oldest religions that still retains its identity and ancient heritage in Iraqi Kurdistan. Its ancient temples and shrines, dotting the landscape, confirm Yazidism’s deep roots in the area. The book highlights the challenge of survival Yazidis face in the face of the present wave of religious extremism, including demonization of the religion among some Muslims. The book’s study of Yazidis calls on Sunni and Shiite religious institutions  learn more about the group and relate to it civilly and humanely.

The roots of the Baha’i faith in Kurdistan date back to its beginning, when the prophet Baha’ Allah decided to move to this region in 1854 in order to retire into its mountains for devotion (i’tikaaf; devoting oneself to worship and staying away from worldly affairs). In recent years, the Kurdistan Regional Government has made efforts to revive the Baha’i activities publicly, under the aegis of a new Ministry of Awqaf and Religious Affairs that enfranchises the spectrum of faith-based communities. Another striking features of religious life in the area is the so-called “New Zoroastrians” — Kurds who rediscover and newly embrace the ancient faith. The book attributes the trend to a reaction against Islamist extremism, as well as dissent from the old traditional identities.

The book devotes a study to the Jewish presence in Iraqi Kurdistan, highlighting the increasing reengagement of Kurdish Jews with their place of origin in recent years through economic engagement, cultural activity, and religious pilgrimage. In 2017, Erbil City witnessed the first public celebration of the Jewish holiday of Passover. (The years 1950-’51 saw the forced migration of most of Iraq’s 2,600-year-old Jewish community. The Iraqi government revoked the citizenship of those who departed, and most emigrated to Israel to start a new life.)

The history of Christianity in Kurdistan dates back to the faith’s earliest decades. As the study shows, Christianity spread out “quickly until it reached Hadiab (Erbil) by the messenger Addie and his follower Mary at the end of the first century A.D, while (Bakida) became the first bishop of Hadiab. Perhaps Saint Isaac’s church has been one of its oldest churches since the year 135. In addition, Hadiab became a center for an archbishop in the year 310.” Christian Kurds enjoy an influential presence in many cities of Iraqi Kurdistan. The activity of the Evangelical Church is meanwhile also robust in the region, and some Kurds of other faiths have reportedly been moved to embrace Christianity.

Al-Mesbar center would like to thank all participants in the book, in particular, our colleague Ibrahim Sadeq Malazadah, who coordinated its chapters.