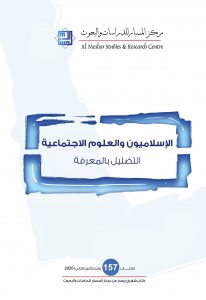 Al-Mesbar Studies and Research Center — in its 157th monthly book, Islamists and Social Sciences: Misleading Knowledge (January 2020) — seeks to study Islamists’ instrumentalization of the social sciences. A close reading of their ideological literature demonstrates how Islamists have adapted these sciences in the service of their educational, political, and economic project. It also examines the theories by which these sciences have assessed the phenomenon of political Islam, along with its relationship to the subjects of history, educational sciences, economics, media, philosophy, law, sociology, and international relations. It attempts to uncover the methods by which Islamist groups have endeavored to transform the social sciences into an adjunct of their ideology, rendering it more coherent and persuasive and ultimately bolstering the needs of their political project.

The book deals with the pragmatic and ideological use of history, surveying the most prominent historians to emerge from within the various Islamist movements, who have adapted historical events to serve specific purposes, in the interest of the “select vanguard,” as Islamist literature often refers to their parties. This happens in several ways, with deep implications for Islamists’ analytical methods and historical treatment of major wars, controversial personalities, and dissenting views.

The book analyzes the effect the Islamist approach has had on the humanities as a function of Islamists’ political ideas. It examines the ways in which Islamists have sought to bend the educational sciences to serving their ideological and organizational agenda, recruiting students and molding school curricula. One of the book’s studies notes how there has been an organizational migration from the disciplines of social and human sciences to the applied sciences since the 1970s, especially to the field of engineering and medicine. It observes that, despite differing biographical and social characteristics, and the varied careers of many prominent violent Islamist activists, the majority of battlefield jihadists in the Middle East were most likely students of applied disciplines in engineering and medicine rather than arts and social sciences.

Islamists endeavored to reshape and, in effect, subjugate nonsectarian political and economic theories. They proceeded to use the results to construct a political economy directed to supporting “the wealth of the Brotherhood.” Consequently, the book engages in a protracted interrogation, not of Islamist theory per se, but rather of Islamists’ exploitation of prominent economic theories toward self-enrichment. It also notes the disastrous results these warped economic theories have had in Iran, Sudan, and Tunisia, as the studies catalogue.

Islamists have sought to instrumentalize their modified theories in the service of their recruitment machine, one marked by exclusionary and Manichean ideas, by communicating them to the largest possible number of potential followers. They have pursued these ends through new and effective means, benefiting from both traditional media as well as new forms of social media, and often succeeded in promoting their agenda, as two studies in the book address. The first offers an analysis of the fundamentals of Islamist media discourse, focusing on the extent of its impact. The second delves into Islamist activity in cyberspace and social networking platforms.

Another study tackles the degree to which philosophy has been adapted, exploited, and re-formatted into a guardian of Islamist dogma and rhetoric. The book also focuses on highlighting Islamists’ view of the law on one hand, and how sociologists in countries such as Tunisia have interpreted the Islamist phenomenon on the other, focusing on theories of international relations exploited by Islamists to serve their political goals. This is especially clear in the case of the Iranian model, which adapted geopolitical theories to support its expansionist policies and carve out a sphere of influence. One study discusses the invention of theories, such as the “Umm al-Qura” theory, through which Iran tries to position itself at the center of the Islamic world.

In conclusion, Al-Mesbar Studies and Research Center thanks all the researchers participating in the book, and especially our colleague Jumana Manasra, who coordinated this volume.