Religious Minorities After the Arab Spring 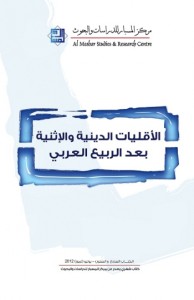 In its 67th monthly book, Al-Mesbar Studies and Research Center looks at the religious minorities who are governed by Islamist parties in Iran, Turkey, Sudan, Iraq, Morocco, Tunisia, and Libya. The edition starts with a study by Dr. Rita Faraj on minority and majority life in contemporary Islam and on dynamic jurisprudence, “Fiqh.” Abd Al-Hussein Shaaban examines Christians and Mandaeans under the Al-Da’wa Party regime in Iraq. With respect to freedom of religious belief and constraints, Dr. Abd Al-Hakim Abu Al-Louz examines Christianity and Judaism in Morocco and shows the constitutional and legal framework of the minorities’ position in Morocco. Nabil Al-Atoum looks at religious minorities—particularly Armenian and Jewish minorities—during the Iranian Revolution. He also discusses the legal and constitutional frameworks available to minorities. Muhammad Nour Al-Din explores minorities’ challenges in Turkey and examines an international act from the Lausanne Convention in 1923, which only admits Islamic and Christian minorities; but Turkey’s minorities are Kurds, who make up nearly one-sixth of the population, and Alawites, who are about a quarter of the population. The monthly book is Islamic Parties and Movements and Understanding Others by Saleh Zahr Al-Din. It highlights the development of moderate and extremist Islamists’ speech since the Muslim Brotherhood movement was established in Egypt.