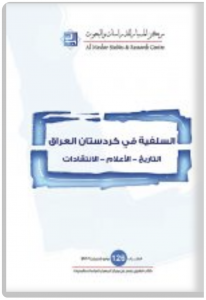 The Kurdish question is one the most vital national struggles in the region. Its trajectory is most easily observed in Iraqi Kurdistan, as differing forms and degrees of autonomous rule have been granted to the area since the 1970s. In addition to Kurds’ well-known fighting spirit, but their societies are nuanced with ideas and ideologies that range from religious to political, and included extremism and terrorism.

Salafi trends first entered the region during the second half of the twentieth century, and grew during the 70s, in a manner that in some ways paralleled Salafi experiences in the broader Arab and Muslim world. But grafted onto the Iraqi Kurdish case was the complexity of the area’s unique ties with Iran, owing to grudges they shared against the Iraqi regime during the eight-year war between the two countries.

Al-Mesbar’s 126th monthly book, for June 2017, explores the historical roots and trends of Salafism in Iraqi Kurdistan. The Center commissioned a cast of Kurdish writers for the task, in order to better comprehend how Salafism is viewed by the Kurdish intelligentsia.

The book finds that the first strand of Salafi thought to appear in Kurdistan may be described as “intermediate Salafism.” It was established by Mullah Hamdi Abdul Majid Isma’il (1931-2012), who studied under the guidance of Mohammed Nasir Al-Din Al Albani (1914-1999) in Syria.

Political Salafism in the area evolved to join the “Islamic renaissance movement,” adopting what it referred to as “Salafism of methodology and modernism of confrontation.” As for jihadist Salafism, influenced by the jihadi groups in Egypt and elsewhere, its followers chose to revolt against Kurdish society and authority.

Other portions of the book find that the “Salafi trend in general was an imposition on Kurdish society.” In one chapters, the author, — a political figure opposed to the Kurdish political system — asserts that the Salafi presence in Kurdish areas has been divided among supporters and opponents of the government.

Another study points to the common ground between Salafism and other, organic strands of Islam as practiced in the area.

The book traces how the theory and practice of Salafism in Iraqi Kurdistan is inflected by the local culture. Additionally, political shifts in Iraq after 2003, together with subsequent tumult during and after the “Arab Spring,” have all had collective effects on Salafism in Kurdistan.

Kurdish political Salafism, for its part, has sought to pragmatically strengthen its contacts with the rulers. Various authorities responded differently, as another of the book’s authors asserts. On one hand, the government maintained strong ties with any party that openly expressed support and loyalty and turned a blind eye to corruption. On the other hand, the government treated anyone who openly criticized its legitimacy — or accused officials of corruption — with an iron fist. These included groups affiliated with ISIS, as well as Salafi independents.

“Party Salafism,” as characterized by other studies, has meanwhile played a significant role in Iraqi Kurdistan. The group Ansar Al Islam, established in 2001 by Fatih Gregar (Najmudin Faraj Ahmed), split from the Islamic Movement Party and endorsed extremism, to the point that it earned the sobriquet “Kurdistan’s Taliban.”

The book addresses Salafism in Iranian Kurdistan as well, highlighting possible reasons for its development, such as sectarian identity, the lack of national belonging, and, counterintuitively perhaps, support from the Iranian government. Salafis in Iran imposed strict Islamic law on the public space in areas they came to dominate — while the Tehran government either encouraged or ignored the trend. Kurdish activists and researchers believe Tehran’s de facto support for such activities is part of an effort to “create an extreme Sunni power that can overcome Kurdish parties as a means to destroy the democratic aspirations of the Kurds.” Other analyses suggest that Iran is attempting to steer the just Kurdish struggle towards a path of Sunni-Shi’a sectarian fighting in order to more easily accuse Kurds of joining ISIS.”

The center would like to thank all the experts who contributed their papers to this unique and important book — and Rita Faraj, who coordinated the chapters.