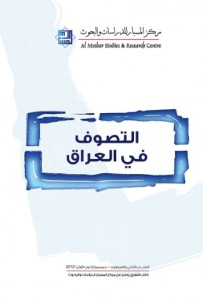 In its 72nd monthly volume, Al-Mesbar Studies and Research Center examines Sufism in Iraq. Mohammad Fadel Ibrahim Hamadi sheds light on Kasanzania Sufis from the perspectives of its people, sheikhdom, and institutions. He points out that interaction between science and Sufism is a constant truth for leading Sufi Sheikh Mohammad Al-Kasanzan. Researcher Ala’a Mohsen Hammoud draws attention to the importance of Al-Taqiyya (dissimulation) in spirituality. Yasser Mohammad Yassin Al-Badri Al-Husseini examines Al-Taqiyya and Sufi orders/branches in Samarra and Diyala, pointing out that the beginnings of modern mysticism in Samarra date back to the end of the nineteen century and revealing that Qadiriya and Rifa’iya have been the most prevalent in Samarra since ancient times. Nouhad Tarek Zaayan Al-Karbuli presents a new meaning of Al-Taqiyya as part of dependency. Riad Amer Qaisi presents a critical analysis on Iraqi orders: Rifa’iya, Kaki, and Ibrahimiyyah. Nathla Al-Jabbouri concludes that Iraq will always remain a source of Sufi mysticism to the Muslim world, by embracing Sufiism’s leading figures and sheikhs. The issue’s monthly book, written by Iraqi researcher Rachid Al-Khayoun, is One Hundred Years of Political Islam and is reviewed by Omar Al-Bashir Al-Turabi.