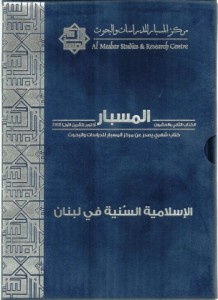 In its 22nd monthly book, Al-Mesbar Studies and Research Center deals with the pressures facing the Sunni community in Lebanon after the assassination of former Prime Minister Rafik Al-Hariri in 2005. This is a topic that calls for a deep reading of the Sunni Muslims in this  country that is so threatened by sectarianism, especially since many of the Sunni Islamist movements are yet to determine whether to advocate or forswear violence. Dr. Radwan Al-Sayyed begins with an overview of the intensity of Sunni Islam in Lebanon, which is a relatively modern phenomenon. Dr. Abdul Ghani Imad highlights the Islamist movement’s moderate Sunnis in Lebanon. Deputy Secretary-General of the “Islamic Group” in Lebanon Ibrahim Al-Masri examines the political structure of Lebanon on the one hand, and the sectarian diversity that characterizes the community structure of the country on the other hand. Hasan Al-Chahal, one of the most prominent faces of Salafism in Lebanon, presents a history of the Salafism in Lebanon. Ahmed Ayoubi explores the Iranian Sunnis in Lebanon. Former Secretary-General of the Islamic Group Fathi Yakan looks at the political and intellectual discourse for the Islamic Action Front. The monthly book is Jihad Every Day by French researcher Bernard Roger. Dr. Hassan Hanafi reviewed the book for the “Fundamentalist Mind” series.