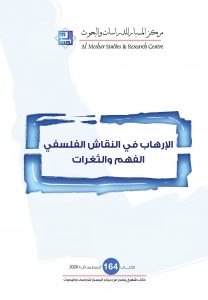 The Al-Mesbar Center for Studies and Research — in its 164th monthly book,  Terrorism in Philosophical Debate: Understanding and Gaps (August 2020) — has set itself to the task of exploring a selection of Western philosophers’ views on terrorism as a contemporary phenomenon, as well as the points of synergy and discordance between them.

The studies explore the depths of European and American philosophical debates in the interpretation of terrorism, attempt to deconstruct and understand it, as well as their implications for Arab intellectual life. Philosophers who come in for a close reading include Jacques Derrida, Jean Baudrillard, Edgar Morin, Hannah Arendt, Jürgen Habermas, Judith Butler and Slavoj Žižek.

The Philosophical posture which rejects violence has largely consolidated, but in the context of the search for understanding terrorism, it has developed a capacity for tolerance that occasionally verges into justification, whether inadvertently or consciously. This tendency bears a notable similarity to the findings of psychological analysts in the examination of the terrorist’s character, as detailed in a previous study,  The Psychology of Terrorism: Individuals and Terrorist Groups (Book 125, May 2017).

Of those philosophers who demonstrated an analytically unsound openness to rationalizing violence, they predominantly fell into two traps. The first was to dismiss terrorists as mentally ill, effectively relieving them of their moral responsibility.  The second was to hold the circumstances responsible for terrorists’ descent into violent extremism. This factor should be taken seriously and handled judiciously; at the same time, it is no less important to examine the reality of violence and its effects in a holistic manner.

The book addresses contemporary Western Left-wing philosophical debates on terrorism, in the light of ongoing global transformations. One of the foremost influences on the discussion are the terrorist attacks of the twenty-first century and the subsequent international conflicts. It should be noted that the abstract philosophical theories which effectively justify terrorism are analytically weak and often divocrced from the reality and substance of the phenomenon itself.

The book serves as a necessary introduction and a critique of the gaps which have plagued philosophical analyses of terrorism. Islamists sought unconditional openness toward them in Western intellectual circles and attempted to exploit that openness, in the belief that they might forge common cause in shared antagonism toward the State and its concept of citizenship.

Certain philosophers offered a species of “anxious analysis”, characterized by a habitual Leftist sympathy for all revolutionary waves against state power. This tendency neglects to provide a nuanced analysis of the many layers of contemporary terrorism. Excessive focus on high-profile events like the terrorist attacks of September 11, 2001, for example, leads some theorists to dive into an extended critique of U.S. foreign policy in the Middle East, which is assumed, rather than proven, to have invited those attacks. In such hands, the agency and brutality of the terrorists themselves is unaddressed. Instead, fundamentalist violence is reduced to a mere reaction to neocolonialism.

An explanation of the violence used by terrorist organizations requires a preliminary introduction. Such an opening can enable the layperson to understand how specialists, sociologists and scholars have approached terrorism, and would be greatly beneficial to philosophers seeking to more fully understand the menace it poses.

In this area, we are informed by abstracts from Professor of Political Science at Stanford University, Martha Crenshaw, whose central historical theory, adopted in the 1980s, holds that the model of terrorism which is now expanding throughout the international scene is fundamentally different, both structurally and substantively, from that which held sway in the 20th century.

Violence committed by any group other than the state inherently suffers from a dearth of legitimacy, so groups and intellectuals are forced to seek political justifications which can render their recourse to violence more socially acceptable..

The term terrorism itself is open to debate in the realms of international law, political philosophy, and sociology. The multiplicity of interpretations concerning it reflects the diversity of hypotheses and conclusions sketched by contemporary Western and Arab philosophers. And while the core concepts in the study of terrorism have shifted over time, the many debates surrounding it have yet to fully capture its forms and complexities.

Some philosophers proceed in good faith. And yet they pursue an empathetic understanding to the point where they all but endow terrorist acts with a dross of legality, placing it on the same plane as the legitimate monopoly on violence held by the State.

The philosophical interrogation of the legitimacy of the State in the Western context, effectively proceeds in tandem with the Islamist rejection of the State as a modern innovation, contradicting the tenets of Islamic scripture. And without meaning to, the abstract critiques of the former can have the effect of justifying the concrete violence of the latter.

And yet, there can be little doubt that philosophy is essentially a negation of violence. It represents a drive for understanding man’s place in the cosmos, and pursuit of the zetetic quest for meaning and knowledge. While the deconstructing spirit animating this quest can often be corrosive of State authority, it can only arise and flourish in times and places where the State is strong enough to provide general security. And it stands in direct contrast to the wanton violence which modern terrorist movements espouse. In that context, a philosophical project aiming, wittingly or not, at humanizing terrorism while undermining the State is sure to be beset by contradictions on all sides.

The book follows in the path that the Al-Mesbar Center for Studies and Research has long trod, offering a study of the terrorist phenomenon set within the multidisciplinary curriculum, proceeding from the psychology of terrorism to the exploitation of the social sciences by Islamists and their influence on the educational curriculum. From there we have progressed towards a thoughtful examination of critical studies of terrorism, developing new interpretations and recasting old problems and issues.

In conclusion, the Al-Mesbar Center for Studies and Research thanks all the researchers participating in the book, especially our colleague Rita Faraj, who coordinated its production.