The Brotherhood in Diaspora: An Introduction to the International Organization 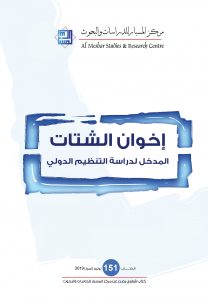 Al-Mesbar Studies and Research Center, in its 151st monthly book — The Brotherhood in Diaspora: An Introduction to the International Organization, published in July 2019 — details the activities of the Muslim Brotherhood and its affiliates in the United States, Latin America, Europe, Australia, and South Korea. It applies historical context to their presence in these countries; traces their opportunistic interaction with the causes of the surrounding Muslim communities; and examines their attempts to monopolize legitimate communal representation as well as their bid to exploit ​​the concept of integration in search of political opportunities which might profit their international organization.

The Brotherhood adapts according to the environment in which it lives. Discussions of the Brotherhood’s international activism speak to a global ideological profile shrouded in ambiguity — for example, with respect to the discontinuities of the group’s organizational structure, dissembling regarding its agenda, and the tensions between the group’s local and external leadership. The result has been what might be termed a non-national or transnational set of values. The book does not claim that it provides definitive answers to settle the debates over what ultimately stands behind the movement’s internal contradictions. Rather, it offers a way of thinking about the movement to help researchers pursue a clearer picture, enabling them to understand how Islamist political organizations use ground-level realities to advance their tactical or strategic agenda.

This book is not a final conclusion, but a preliminary introduction that attempts to pave the way for future, more in-depth studies. Its primary goal is to distinguish the critical sub-political culture cultivated by Islamist organizations abroad, and their implications for the organizational structure in their countries of origin. The studies do not attempt to analyze the formation of the Brotherhood’s international organization, or its clandestine wing. Nor, for that matter, do they enter into the group’s internal administrative and logistical disputes. They do, however, lay bare some keys to understanding that may enable the judicious researcher to examine all of these tensions, which typically reflect no more than competition over resources between the local and transnational wings of the group. The book also traces the existence of an independent international organization that has created foreign Brotherhood branches removed from the domination of the Supreme Guide in Egypt. It suggests that, as much as diaspora Brotherhood members strive to overcome the non-Islamic culture of the states in which they reside, they are also in a state of flight from the mother organization in their country of origin.

This “flight” may manifest initially as a conflict over a minor administrative matter that becomes a dispute over money and management, and then escalates.While the intellectual structure of the movement is relatively coherent and consistent across the same branches, the operational behavior of the respective branches can be so incompatible as to make it difficult to array them under one umbrella.

The book highlights the development of the pragmatic interests of Brotherhood activism abroad, tracing the Brotherhood’s response to pressures and restrictions imposed by host countries. Those responses which might lead to new forms of reliance on foreign supporters, even if they cut against the interests of the organization. The book also exposes projects undertaken by Brotherhood branches on behalf of the Turkish government which proved harmful to the national interests of their respective host countries. In some cases, these moves engendered opposition within the organization itself.

In South America, the Muslim Brotherhood has improvised the formation of various “operational centers,” taking the form of mosques, cultural and Islamic centers; charitable and relief organizations; and halal meat trade monopolies. In general, these tributaries form powerful currents of interest through which the Brotherhood operates in the West, facilitated by its financial capabilities. Its resultant social clout enables it to penetrate political institutions, and to solidify its relations with political parties, as well as attract new Muslim recruits.

One of the book’s studies examines Moroccan Islamists in Western Europe, presenting its subject matter along three axes: the theoretical keys to the project of the Islamist movement; the mechanisms by which that movement motivates its supporters; and the main features of the Moroccan Islamist movement’s project in Europe. Tactically, the European branches rely heavily on dissimulation and the methodical penetration of local institutions. Operationally, they exploit conflicts and crises that afflict some Muslim communities abroad.

In order to study the Brotherhood’s activity in the West in depth, it is necessary to adopt a multifaceted analysis. Political approaches alone are not sufficient to capture the essence of the Islamist presence. Since its inception, the mother organization has built social, religious, and ideological depth. Its social activism has helped it to impose its influence on far-flung Muslim communities in various European countries, the Americas, and Australia. Added to this are the Brotherhood’s media platforms in the nations of the Muslim diaspora. These endow the organization’s various branches with powerful propaganda capabilities. These achievements raise questions: How did the Islamists build their social depth under the ostensibly watchful eye of the state? Why are social groups attracted to the Islamist project despite its highly fraught relationship with modern democratic political systems? What means have proven the most effective at curbing its expansion? Does the conflict turn on political awareness, or is it fundamentally about the identity of Islam and faith?

Modern Western political alignments in recent years, given the ascendance and political victories of the Right, suggest that the world is moving towards more extreme rhetoric regarding border enforcement and immigration limits. This development infuses an additional dose of strength into Islamist movements and brings them into direct conflict with right-wing parties. The Islamists, after all, rely on the principle of expanded immigration, often going to unusual lengths to exploit and broaden asylum laws, as is the case of South Korea.

This book offers rare insight and represents a major effort to pave the way for serious researchers to grapple with the confrontation between the Brotherhood’s offshoots and the range of local actors in their vicinity who seek to shut them down. The book also enhances appreciation for the predicament of the state — whether in Arab countries, the West, or elsewhere — as it strives to protect its sovereignty from a movement fundamentally at odds with the reigning international order.

In conclusion, Al Mesbar Center thanks all the researchers involved in the book, especially our colleague Maher Farghaly who coordinated the issue.

The Foreign Fighter Mobilizations from Europe