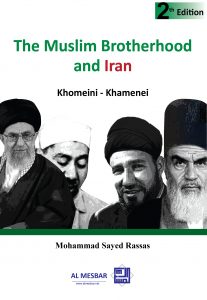 The second edition of the book “The Muslim Brotherhood and Ira ;  Khomeini – Khamenei” is published by Al-Mesbar Studies and Research Center in the United Arab Emirates.

The book’s first edition garnered a positive reception upon its release in February 2013, as evidenced by a plethora of warm reviews in print, as well as several mentions on satellite channels. Interest stemmed in large measure from its careful treatment of the relationship between the two largest Islamist political movements in the Sunni and Shiite milieu, precisely at a time of rising Sunni-Shiite tension. That tension was fueled in no small part by the remarkable political and religious transformation wrought by Khomeini in 1979. In subsequent years, Shi’ite political parties spread throughout the region and entered into conflict with their Sunni counterparts, especially in Iraq, Syria, and Lebanon. This tension arguably reached its zenith following the American occupation of Iraq in 2003 and the resulting American-Iranian conflict in that country. Sectarian tensions were fueled by a number of factors, including the revival of the Iranian nuclear program, a succession of missteps by Shi’ite Islamist-dominated governments in Baghdad, and much else besides.

The second edition provided an opportunity to expand on the presentation of the two parties’ relationship in the years between 2013 and 2020, which is addressed in the book’s fourteenth chapter.  The author offers a new conclusion which outlines the intellectual junction linking the two parties. He notes that Sayyid Jamal al-Din al-Afghani was the first bridge to connect the Sunni and Shi’ite banks to the idea of ​​“general [i.e. non-denominational] Islam”. This ecumenical current can be traced through Sheikh Rashid Rida, Hassan al-Banna, and even to Khomeini himself. Indeed, from a certain vantage point, manifestations of fundamentalist political Islam, whether in its Sunni Brotherhood or Shiite Khomeinist permutations, share a single core political and intellectual foundation.

After a lengthy period of contemplation and examination lasting several years, the author’s conclusion in the second edition is that the concept of “general Islam” encompassing both Sunni and Shiite beliefs, still falls short of a bridge uniting Al-Banna and Khomeini. It produced certain intellectual interactions with political implications, for both aspired to generate a single intellectual system and a common intellectual vision for Islam, one relevant to both past and present Muslims while also competitive with Western ideologies, the communist bloc, and capable of generating Islamic program for a political “awakening.” It is this shared aspiration to a single intellectual system common to both the Muslim Brotherhood and Khomeini-Khamenei’s Iran that led to this long-term political encounter between them.