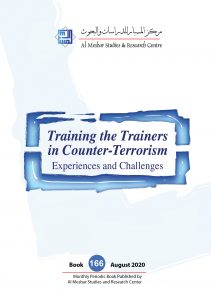 The Al-Mesbar Center for Studies and Research, in its 166th monthly book, Training the Trainers in Counter-Terrorism: Experiences and Challenges (October 2020), examines and evaluates the programs dedicated to training counter-terrorism personnel, as well as those engaged in the de-radicalization and the rehabilitation of extremists. It covers the core expertise accumulated at the national and organizational levels in dealing with detainees affiliated with terrorist organizations in prisons, as well as training initiatives to monitor and halt terrorist financing, the rehabilitation of imams, and the security personnel tasked to deal with arrested extremists.

The analysts gathered in this work examined United Nations efforts to “train the trainers” and studied the American experience post-9/11, both in terms of grand strategy and frontline tactics, as well as attempts at rehabilitating imams in religious colleges. The experiences of France, Belgium, and Germany are also presented from an interdisciplinary perspective; the training curriculum of trainers in Saudi Arabia is explored; and the unique Emirati model is extensively parsed for its implications in the realms of security and media. The book also delves into the Egyptian experience and its ramifications for other nations, such as Indonesia. Likewise, it touches upon the Iraqi experience with the Islamic State of Iraq and the Levant (ISIL), better known as Daesh, and its aftereffects. The Moroccan model is covered for its impact on European experiments.

The book follows the efforts of the United Nations in the field of training the trainers in the field of de-radicalization. It highlights the training projects sponsored by that international organization, starting with the training of trainers assigned to deal with offenders and detained radicals, and proceeding all the way up to the training of personnel charged with combating terrorist financing as well as the legal and juridical training required to effectively combat terrorist organizations in the courts. The study concludes that it is of vital importance to utilize proven training courses at the international and national levels and to coordinate strategic efforts as much as possible.

The book discusses the U.S. counter-terrorism response at two basic levels. The first combines the psychological, social, and legal aspects of counterterrorism. It addresses current perspectives on introducing a federal criminal law concerning domestic terrorism in an effort to strengthen the law enforcement response. This takes into account the training efforts and counterterrorism experience in existing penal institutions, particularly of the last 20 years. The second level concerns the process by which competent trainers, spiritual guides, and imams themselves are produced. An expert in the process charged programs of the faculties of religious sciences with responsibility for retraining of Muslim imams. He examined several models, taking note of their strengths and weaknesses before concluding that the Bayan Claremont program was the optimal choice. It enabled trainees and trainers to become more acquainted with, and open to, the social sciences.

In the European sphere, several studies deal with the training of imams and various projects aimed at their reform. These studies present the programs listed by civil and governmental institutions in the fight against terrorism as well as several recurring shortcomings. One of these is the tendency of certain Islamist groups to seek to profit from the fight against extremism by claiming to offer a “moderate Islamist” antidote to violent extremism. These mostly consist of Brotherhood-affiliated groups. The book stresses the importance of Arab countries cooperating with European partners to counter extremism, providing them with the appropriate channels to train more imams and intellectuals who believe in the idea of the state, and stressing the need for Muslims to integrate into their European society.

One field testimonial covers France’s experience in the realm of Countering Violent Extremism (CVE) projects. It focuses on CVE training initiatives within the French National Police in addition to traditional counterterrorism. These efforts seek to identify trainees at the forefront of the field and cultivate those who can train others.

The testimonial advises that radicalization remains prevalent within the penal system, and notes that one-time offenders should be assessed to determine their risk of recidivism. The study concludes that it would take at least ten years to fully train an expert analyst of the phenomenon, capable of dealing with the rehabilitation of extremists.

The Belgian model takes the path of addressing extremism both militarily and socially, assessing treatment on an empirical and holistic basis. According to one study, an internal assessment of the Belgian Government’s counterterrorism efforts, including the establishment of a “best practices” reference manual, noted that these efforts have helped keep Belgium at the lowest levels of threat relative to most other EU member states.

In the Arab field, the book studies the Saudi model, which has achieved remarkable results. The Kingdom has made active efforts to train the trainers in the fight against terrorism in the security, penal, religious, and legal sectors. The study reviews the distinct efforts of Saudi National Security and National Guard colleges and institutes, as well as the collaborative training and approaches used therein and highlights this through field briefings.

The UAE counterterrorism model is well developed and based on an innovative, proactive vision as well as an international cooperative approach. The study detailing it focuses on reviewing the legislative and legal axis. It also reviews policies aiming to institutionalize a culture opposed to extremism through media, religious, cultural, and educational hubs. In the areas of trainee capacity development, the study highlights the security, military, and educational realms, as well as the Abu Dhabi memorandum on best practices for education and CVE, a critical platform on which to build globally.

Following the end of military operations against Daesh in Iraq in 2018, the UNDP Rule of Law Program supported a comprehensive security sector reform program, in collaboration with several ministries, that included a path to the rehabilitation of extremists. The Kurdistan region had a special experience, which the authors highlight. A field study was carried out after a thorough examination of Iraq’s experience in dealing with radicalization in prisons, particularly following Daesh’s defeat.

Egypt defined its early experience in correcting the perceptions of Islamist detainees through seminars and dialogues with the wider Islamic community, on stopping violence. This project has effected a range of other rehabilitation programs, perhaps most notably in Indonesia. It served to pioneer a flexible approach that further developed the traditional methods that had been employed by prison administrations harboring convicted extremists. Its notable additions included intellectual dialogues and lessons in patriotism and religion.

In two studies, the book focuses on the experience of the Kingdom of Morocco. The first deals with the training of imams and religious guides while the second focuses on the rehabilitation of repentant extremists. Following the events of May 16, 2003, Morocco began the first imam training program, as part of the reform of religious policies in 2004. By consequence, obtaining a diploma to practice the profession of Imamate became a mandatory requirement. This reform later developed further with the establishment of the “Mohammed VI Institute for the formation of imams, male mentors, and female mentors” in 2015.

In conclusion, the Al-Mesbar Center for Studies and Research would like to thank all the researchers who contributed to this book, especially our colleague Jumana Monasera, who coordinated its production.