Yemen: from Imamate to “Decisive Storm” 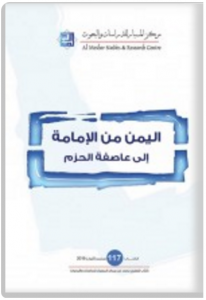 Yemen’s enduring internal fissures spread precipitously beginning in 2011, in a process that has brought about a cracked polity ruled by a weak and devastated state that has not collapsed but is not stable. In this environment, separatists, terrorists, revolutionaries, insurgents, sectarians, and tribalists have all expanded their activities and together filled the political vacuum after consecutive governments in Yemen failed to establish the minimum requirements for a functioning state.

Many studies and international and local reports make it clear that the principal challenge facing Yemen is establishing a modern administrative system that utilizes the principles of good governance to form a new social contract based on empowering the people to set public policies, oversee their implementation, and support comprehensive and sustainable development.

Al-Mesbar’s 117 monthly book, for September 2016 — Yemen: from Imamate to Decisive Storm — assesses the most formidable challenges facing Yemen, both internally and externally, viewing the present predicament in light of historical, political, religious, social, and territorial context and through a local as well as a regional framework.

One of the book’s key themes is the central role of the tribe in Yemen. This traditional form of human organization, long enshrined in Yemen, has resisted modernization. The lack of the benefits of modern governance, in turn, have provided justification for the endurance of tribal leadership and protections. The tribal system in Yemen is deeply rooted, and has been historically an important player in the political establishment and the constitution of the state of Yemen, in times of war as well as peace. Looking toward the future, the book asks, what the new roles will be assigned to the tribe in politics and governance? Will its role expand or contract? Will it serve as a guarantor or legitimacy and an asset to local and regional stakeholders, or a hindrance to stabilization?

In examining the roots of sectarian violence in Yemen, the book traces a correlation between sectarianism and abject poverty. A report by MENA Economic Monitor (spring 2016) notes that Yemen has the highest rate of poverty in Middle East; about 37.3% of Yemenis live under the poverty line, a figure which worsens in rural areas. Illiteracy rates in Yemen reach a 48% of the population to be one of the highest in the world. The book’s researchers have indeed found that sect-based extremism and chauvinism in the country do fester in times of economic crisis. Other factors which the book examines range from the country’s geographical proximity to Saudi Arabia to the 2003 US-led invasion of Iraq, which Houthi leaders have used to stoke anti-American sentiment. The book’s studies also pay  due attention to the Houthis’ poor relations with the U.S. on the one hand and Iran on the other — the latter, intensifying since March 2015.

The book also considers the relevance of the country’s north-south divisions and the role of Yemen’s national army, such as it is, in potentially helping to safeguard a transition to a unified, properly functioning state.

Al-Mesbar would like to thank all the researchers who participated in the production of this book, with special thanks to our colleague Abdullah Hamidaddin, who coordinated this edition.