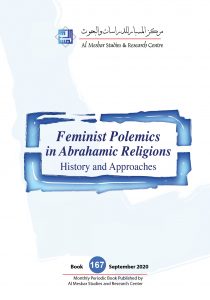 The 167th monthly book published by the Al-Mesbar Center for Studies and Research — Feminist Polemics in Abrahamic Religions: History and Approaches (November 2020) — touches on a subject near and dear to one of the Center’s deepest concerns. It addresses the role and responsibilities of women of faith in their respective religious traditions. We have studied this issue with particular reference to Islamist movements, as well as in the religions and cultures of the Middle East more generally. Whether among the minorities of Iran and Turkey, in Kurdistan, in the Gulf, or simply in the social mainstream of the region writ large, the study of the Abrahamic sphere warrants special attention. The role of women constitutes a critical, if often untold, component of the narrative of religious history. It is therefore incumbent on any who wish to reach a deeper understanding of the region and its faith to cultivate their knowledge of women’s history in both.

This book attempts exactly that. Several studies offer a feminist understanding of women’s positions and roles in each of the Abrahamic religions, discussing the interpretations of female scholars of the Old Testament and of Christian theology, as well as their interpretation of women’s presence in the Bible. They have noted both the evolutionary and systematic development of an incipient movement of Islamic feminism, dedicated to the pursuit of equality in both the intellectual and legal realms. One study takes a comparative perspective, exploring the issue of the exclusion of women from the Rabbinate in Judaism, the priesthood in Christianity, and the imamate in Islam, and offering a dialectical view of each.

The book addresses the women of the Old Testament, analyzing the question of Creation from a gendered perspective. It highlights the social, religious, and political roles played by female protagonists of the Bible, and seeks to explain the frameworks for gender discrimination, without negating the broad room for interpretation latent in the text. It notes that the period of the early Israelite kingdoms was marked throughout by the presence of powerful women who left their mark. Indeed, many Biblical stories center around the presence of queens, counselors, and wise women.

Jewish feminism often adopts a “postmodern” vision, working to build a trend aimed at emancipating women from what it perceives as a traditionally secondary role. This tendency can be discerned in three aspects of Jewish feminist research. The first aspect is to navigate the field of traditional theology, which allows one to conceptualize a religious practice restructured in compatibility with the tenets of feminist theology. Second, it offers a critical analysis of women’s place at the heart of the Jewish community. Third, it suggests an ongoing project of refashioning Jewish identity. The book traces the long history of women’s groups’ demands to hold prayer sessions at the Western Wall in Jerusalem, with a particular focus on the activism of the “Women of the Wall” organization. This episode highlights the relevance of inter-communal friction between the Orthodox and Reform streams of Judaism, particularly regarding gender. This friction has played out in debates over Israeli government policies, and been the subject of more than one pivotal Supreme Court case.

The evolution of Christian Feminist theology, through various iterations, began in the nineteenth century. It held that any interpretation of text or tradition within Christianity should also be viewed through the prism of women’s experiences. Several studies outline the various schools of this hermeneutic content, identifying the most important approaches and demands of feminist scholarship. One flashpoint worthy of particular note was the mounting critique of Christianity’s traditional prohibition of women receiving priestly ordination. Feminist scholars have for decades sought to lay the theological foundations for opening up the priesthood to women, while traditionalists remain opposed across the Catholic, Evangelical, and Orthodox communities. Nevertheless, certain cleavages are notable. For example, female ordination has become accepted across the Protestant mainline, even as Pope Francis declared that the Catholic Church’s decision to limit the priesthood to men is “eternal” and “will not change.”

In Western academia of the 20th century, feminist literature adopted a new focus on theology. One of the pioneers was American Valerie Saiving (1921-1992), who came on the scene in 1960 with the influential essay “The Human Situation: A Feminine View.” Her work, which critiqued contemporary theology largely by means of psychological observations, had a substantial influence on subsequent feminist theologians.

Other essays introduce the reader to three Western women, whose scholarship founded new interpretations and critiques of traditional Christian theology. Radical feminist Mary Daly (1938-2010), who was profoundly influenced by Saiving, comes in for review, as do theologian Rosemary Radford Ruether and Catholic thinker Elisabeth Schüssler Fiorenza. At the conclusion of the section devoted to Christian feminist studies, one essay details the rise of feminism within the evangelical academic world as well.

In the Arab and Islamic worlds, women have produced voluminous research in the field of Islam and gender. Their approaches and tools have varied in an effort to lend force to arguments for gender equality as well as a firm rootedness in Qur’anic text. The book devotes three studies to understanding how Islamic feminist discourse interacts with the women’s rights movement. It also touches upon women’s relationship to the Imamate, from two directions: the first being the doctrinal standpoint and the second, new feminist interpretations and calls by some women activists for equality within the mosque. In the context of comparative studies, women’s relationship to the clerisy is a matter of common concern to all three monotheistic religions, and one of the most loaded controversies of the contemporary period.

The book presents feminist critical views of traditional frameworks regarding the role and prominence of women in Judaism, Christianity and Islam. Written from women’s perspectives and in mostly feminist language, it envisages progress through debate and civil argumentation.

In conclusion, the Al-Mesbar Center for Studies and Research would like to thank all the researchers participating in the book, especially our colleague Rita Faraj, who coordinated its production.