Through the prism of Arab historical memory, the massacre in Egypt’s Sinai last Friday was nearly a carbon copy of events that took place toward the end the thirteen century in Egypt: The Qarmatians a syncretic religious group fusing Zoroastrianism with Ismaili Shia Islam, repeatedly flattened entire villages, killing women, children, and the elderly. The Assassins, another offshoot of Ismailism, deployed organized terrorism as a political tool. The latter believed that by employing such tools, even a minimally organized power, sufficiently devoted to its cause, could defeat a vastly greater enemy. In that respect among others, ISIS bears some resemblance to these bloody forbears. In the West, the “perfect crime” is one in which the perpetrators cannot be caught. In our region, to the contrary, it is one in which the perpetrators are known to the world, and which serves to wreak vengeance, settle scores, and exhibit the perversion of theology. 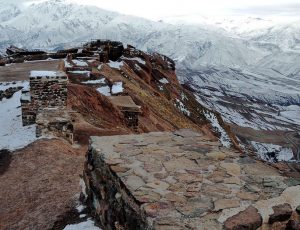 ard Lewis described the Assassins as being more that “ordinary throat slitters” — ideologues aspiring to create an Imamate to brutalize and upend the Sunni establishment. They defined their enemy as any and all Sunni political, military, administrative, and religious institutions — as well as individual persons of influence within them.

It is also noteworthy, in light of the proliferation of jihadist factions today, that the pre-modern campaigns of terror tended to come in batches too. The rise of the Qarmatians; the affiliated state of the Fatimids; and the heyday of the Assassins tended to overlap and intermingle in infamy — only to fall apart in sync, over a three-century period. Some of the remnants of these groups lived on in the Arabian Peninsula, and in peripheral areas of Persia and India, where their progenitors maintain a muted presence today.

History and shared experiences spurred the creation of these sects. The fifteenth-century Buyids, though allies of the Abbasid caliph, were in some ways their heirs. On the other hand, “twelver” Shi’ites, grasping the hazards of the Fatimids in Egypt, the Levant, and North Africa, evolved in a different direction.

Schisms occurred between the various Ismaili Qarmatian sects. The wars between the Qarmatians and their Fatimid brethren were a result of theological differences, stemming from the Qarmatians’ extremism. Yet the Assassins, the Abidi Fatimids, and Qarmatians were all Ismailis. Abidi Ismailis splintered later on into the Dawudi and Nizai. Leadership of the Abidi was inherited by Al-Hasan al-Sabah, who was also its main agitator. The Assassins were Nizari Ismailis, somewhat close to Egypt’s Fatimids. They were caught between the Qarmatians’ early madness — in the early stages , that is, prior to the stabilization of their state — and the Fatimids, who were skeptical of their brethren’s voyeurism. The Fatimids meanwhile expanded their territory into the Sunni world.

The Abidi State appeared in Egypt a few years after the Qarmatian atrocities in Iraq, the Levant, the eastern side of the Arabian Peninsula, and Mecca. The Qarmatians nonetheless managed to establish a state that threatened the Fatimids before their ultimate demise.

The later Abidiyun were keen to distance themselves from the religious stigma of the Qarmatians. The Fatimids watched in awe as Abidi leader Al-Hasan Al-Sabah built his state.

The present-day forces of Sunni Islamism, Al-Qaeda, ISIS, the Al-Nusra Front, and the ruler of Qatar, all have a share in last Friday’s massacre, which aimed to break Egyptian resolve. And some of these elements — particularly the Muslim Brotherhood and Al-Qaeda — have their own strong connection with Iran, an enduring bastion of secretive creeds and sects. In a sense, history has come full circle.