Review of Al-Gamāʿah al-Islāmīyah (translation Sherman A. Jackson), Initiative to Stop the Violence 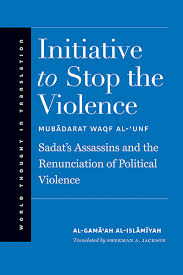 With the rise of the Islamic State (IS) in Iraq and Syria, many have wondered to what extent the violence used by this group is related to Islam. In discussions of this topic, some commentators havepointed to references to acts of violence in the Qurʾān or some of the actions taken by the ProphetMuḥammad as indications that IS policies have a solid foundation in Islamic tradition. The assumption among such commentators is often not that all Muslims are violent or dangerous, but that their scriptures are. Read honestly, this reasoning goes, the scriptural sources of Islam can only lead to a violent conclusion. From this perspective, groups such as IS simply represent the natural outcome of a careful reading of the Qurʾān and the Sunna, while the overwhelming majority of Muslims who do not engage in such violence apparently do not take their holy book very seriously. Such reasoning ignores, of course, the different ways pious and learned Muslims interpret their scriptures, the dynamics of texts in various political and socio-economic contexts, and how certain parts of scripture relate to others, to name just a few factors that can influence the way a text is read and applied.

In light of views such as those mentioned above, it is wonderful to see that Sherman A.Jackson, who holds the King Faisal Chair in Islamic Thought and Culture and is a Professor of Religion and American Studies and Ethnicity at the University of Southern California, has decided to translate Mubādarat Waqf al-ʿUnf (Initiative to Stop the Violence) by the Egyptian al-Gamāʿa al-Islāmiyya. The latter group, as is well known, was notorious for its vigilante activities and terrorist attacks against its rivals and foes, especially in Upper Egypt and parts of Cairo in the 1980s and 1990s. In 1997, however, after much of the group had been imprisoned, its leadership decided to renounce the use of violence and initiate a comprehensive revision of the group’s ideology. The result was a number of books explaining the group’s change of course.

The first of these was Initiative to Stop the Violence, which not only explains al-Gamāʿa al-Islāmiyya’s new-found rejection of terrorism but also makes clear how a militant group can use a close reading of scripture to renounce its violent policies, thereby showing that a careful study of Islamic textual sources can actually be used to propagate non-violence. To scholars of Islam, of course, that is not exactly an earth-shattering conclusion; but given the popular debate on IS and its use of violence, this book has the potential to make an important contribution to popular thinking about the relationship between Islamic scripture and violence. The book also has much to offer to ademics, however. While the revisionist writings of al-Gamāʿa al-Islāmiyya have been available in Arabic for years, this is the first time a substantial portion of them is accessible in English. As such, this book supplements the secondary literature by scholars such as Omar Ashour, Roel Meijer and James Toth on the group’s renunciation of violence, giving those unable to read Arabic direct access to what al-Gamāʿa al-Islāmiyya actually wrote.

The translated booklet, which can be found on pp. 51-121 in the book under review, makes clear th at its authors encountered (and had expected to encounter) scepticism towards their initiative to stop the use of violence and suspicion that this might be a cunning tactic to secure early release from prison. The authors – a number of the group’s leaders – immediately try to dispel this idea by emphasizing that their initiative to stop the use of violence is genuine (pp. 52-5). They continue to explain their change of mind by pointing out that jihad should not be fought for its own sake, but should always be aimed at “promoting the commonweal” (p. 56). After showing the scriptural basis of this principle and of the idea that the benefits of any action should outweigh its drawbacks (pp. 56-66), the authors point out that in the case of Egypt, the violence perpetrated by al-Gamāʿa al-Islāmiyya has only made things worse. This does not mean that they suddenly relinquish their grievances (poverty, underdevelopment, and regime violence), but rather that the use of armed attacks is the wrong way to confront these problems (pp. 66-70) and that the group’s enemies (identified here as the West, Israel and secularists) only benefit from intra-Islamic conflicts (pp. 70-8).

The book lists various prerequisites to waging jihad, including that it must have a  goal that can be realised, that it must guide humanity and that one must be militarily capable of engaging in jihad (pp. 85-112). Interestingly, the authors also address some aspects of the policies of an Islamic state, for example the treatment of non-Muslims. They confront the topic of the traditional poll-tax for Jews and Christians (jizya) – which in a modern context may easily be described as discriminatory – by stating that this payment should be levied only if Muslims have the ability to protect such non-Muslims. If, as is the case in today’s Egypt, a country is not fully ruled by Islamic law, no nongovernmentalgroup has the right to demand payment of the jizya from anyone since there is no way that such a group can fulfill its side of the bargain by protecting Jews and Christians from harm. As
long as such a situation continues, the levying of the jizya must be suspended (pp. 102-7).
The poll-tax for non-Muslims is an interesting example of how al-Gamāʿa al-Islāmiyya uses concepts in a way that acknowledges their value and their role in Islamic tradition but simultaneously delves into their contextualised meaning and consequently finds justification for temporarily suspending them. To be sure, al-Gamāʿa al-Islāmiyya is not alone in using such reasoning to avoid the implementation of rulings that are controversial in modern-day situations: members of the Muslim Brotherhood, for example, have used similar
arguments to justify their views. Yet al-Gamāʿa al-Islāmiyya shows a remarkable degree of flexibility in its ideological justifications, even if it is not alone in doing so. How this process of revisionism came about is ably described in the introduction by Jackson, who has not only translated Initiative to Stop the Violence into highly readable English, but also made an important contribution to the study of al-Gamāʿa al-Islāmiyya itself.

One notable feature of his introduction is that it deals specifically with the question of whether the initiative should be seen as
a genuine change of mind or simply a tactical diversion. Jackson shows that the group was originally
dedicated primarily to calling people to Islam (daʿwa) rather than engaging in violence and that its
use of attacks, though frequent and often deadly, was itself actually a diversion from its core business.
These attacks, Jackson writes, occurred mostly from the late 1980s onward as a result of
overzealousness by some of its members and the subsequent crackdown by the Egyptian regime. As
such, al-Gamāʿa al-Islāmiyya’s violence should be seen as a practical response to the context in which
it found itself rather than a policy rooted in the group’s fundamental principles. Viewed in this
manner, it was natural for al-Gamāʿa al-Islāmiyya to review its policies and, upon reflection, call for a
return to the group’s original aims of preaching Islam, from which it had deviated so dramatically
(pp. 8-11).

The rest of the introduction deals with further fascinating aspects of al-Gamāʿa al-Islāmiyya’s
Initiative to Stop the Violence, including an analysis of the text itself, the difficulties encountered by the
group when it tried to promote this new idea to some of its members, its response to al-Qāʿida’s
terrorist attacks in the United States on 11 September 2001 and – interestingly – whether the group’s
leaders ever expressed remorse for the deaths they caused. For these and other reasons, Jackson’s
translation of, and introduction to, al-Gamāʿa al-Islāmiyya’s Initiative to Stop the Violence make an
important contribution to our understanding of the ideology of radical Islam and may help people
understand that Islamic scripture is more dynamic than some would have us believe. This book
deserves a wide readership among scholars and beyond.