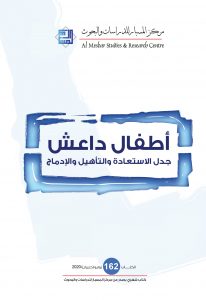 The Al-Mesbar Center for Studies and Research continues to pioneer new studies of Islamist movements and their exploitation of women and children, as well as tracing the impact of the terrorist group the Islamic State in Iraq and Syria (ISIS) better known as Daesh. These studies dive deeply into the political, social and cultural implications of these complex elements, interwoven with issues of international and local law, counter-terrorism programs, and the question of defanging extremism.

The Center’s 162nd book — Children of ISIS: The Recovery, Rehabilitation and Integration Debate (June 2020) — examines both the fraught subject of children raised and indoctrinated by Daesh as well as their return to their parents’ countries, following the group’s expulsion from Mosul and al-Raqqa and the decimation of its rank and file. Some women and children remained in special camps, waiting to return to their countries of origin and, in so doing, opening a debate over their repatriation. This debate turned around three potential options: a flat refusal to repatriate, a cautious and gradual repatriation, and an emphasis on social and psychological rehabilitation prior to repatriation. The studies contained in the book cover numerous Western, Arab, and Asian countries, and seek to analyze this thorny issue through a variety of different interpretations: social, psychological, rehabilitation, security and legal.

The positions of the countries affected by this issue differ when it comes to the repatriation of minors and their mothers. Often these differences are grounded in justifiable concerns: the growing number of children raised by Daesh members and the difficulty of establishing their identity, due to complications with their parents’ mixed nationalities, the tangle of political and humanitarian complications, and the potential exploitation of refugees by radical elements upon their return.

Several studies describe the impact on the children of Daesh members of extremist Islamist ideology, based on the extent of their exposure, and seeking to guage their response to indoctrination through examining their parents affiliated with the terrorist group. This can be offset by other factors, such as an interrogation of their current situation through a close examination of their living conditions in camps. In many countries, public opinion is divided between a strong bias in favor of national security imperatives and a strong antipathy towards the prospect of repatriating potential terrorists, and between an equally strong bias in favor of their right of repatriation, both out of consideration for the equal application of the law, as well as the belief that children should not be punished for the sins of their fathers. Amid these clashing views, researchers emphasize the importance of expanding studies into the virtues and filings of rehabilitation and reintegration programs, to remedy whatever dysfunctions they may find, and to promote legal reform balancing security and equity.

It seems that the “de-radicalization” of committed extremists is the most difficult challenge governments face in the rehabilitation phase, whether before or after repatriation. Islamist terrorist organizations view the children of Daesh members as “future jihadists” and target them for recruitment. Indeed, male minors affiliated with the group have been involved in violence in Syria and Iraq, and have been involved in conflict and extremist propaganda.

The book studied numerous models on a country-by-country basis, focusing on differences. Special attention was paid to the Russian experience, focusing on lessons learned from past conflicts with Islamist movements in the North Caucasus, including both the first Chechen war (1994-1996) and the second (1999-2009). Driven by several factors, Russian strategists have worked to dismantle the social incubators of terrorism.

The book also examines the Iraqi treatment of the children of Daesh members, analyzing their legal, religious, and political status. It also notes the most prominent obstacles hindering the Iraqi government and the relevant authorities from effecting a program of rehabilitation. Another particularly fraught dilemma arises with regard to Yazidi children of Daesh fathers, whose religious affiliations are uncertain, and must contend with several legal and religious complexities.

The book discusses the development of legal conventions for the protection of children in conflict zones, presenting the most relevant international and regional conventions. It also discusses the experiences of international organizations and their roles, as well as European experiences in rehabilitating returnees historically. In sum, the current crisis neither resembles historical models in terms of sheer complexity nor does it neatly align with the landscape of the current international environment.

The studies attempt to introduce psychological methods into dealing with children of Daesh members by examining their social and psychological conditions, assessing the extent of their emotional trauma, classifying them based on their susceptibility to extremist ideas, and then determining the doctrines and psychological approaches best suited to their situation.

The book includes a translated report on primary and secondary sources of the experiences of some minors during and after their experience in Daesh, which also highlights the obstacles to rehabilitation and reintegration programs.

The book is a testament to the many de-radicalization efforts now underway, and a layered study of the intersection of several disciplines implicated in counter-terrorism efforts, and a catalyst for public discussion about how individuals and groups can recover from the effets of extreme intolerance. This issue poses significant challenges to national and international stakeholders, testing their deradicalization capacities and their ability to absorb minor former members of radical groups.

In conclusion, the Al-Mesbar Center for Studies and Research thanks all the researchers participating in the book, especially our colleague Ibrahim Amin Nimr, who coordinated its production..

Editorial Board
June 2020
TABLE OF CONTENTS