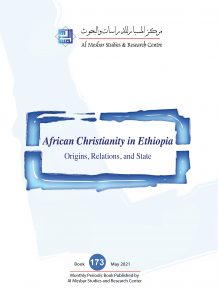 In African Christianity in Ethiopia: Origins, Relations, and State (Book 173, May 2021), the Al-Mesbar Studies & Research Center continues to examine models of the interplay between religion and identity, dedicating its latest book to the formation of African Christianity, with a focus on the Ethiopian Traditional Orthodox Church, one of the few with Semitic roots. The book also sheds light on other African countries where modern churches have developed following the period of independence in the mid-twentieth century. Moreover, it examines religiosity in areas of inter-communal tension and its relationship with the state and the political arena, with a particular emphasis on how religion is instrumentalized by violent groups in countries riven by ethnic, political, and economic conflicts.

The Horn of Africa has been a birthplace for unique, overlapping influences among Orthodox Christianity, Judaism, and Islam, ever since the eras of the prophets of the three Abrahamic faiths. In consequence, the book focuses on Ethiopian Christianity’s external relations with imperial governments, and internally amid constituent groups. It observes their cohesion in buttressing past historical kingdoms, while maintaining its loyalty to the Coptic Church in Alexandria. This tie remained in force until the rise of the nation-state and accompanying nationalist ideology and concurrent fall of Emperor Haile Selassie in 1974. Selassi had traced his line to the Solomonic dynasty and Biblical account of marriage with the Queen of Sheba.

The book opens with a discussion of the different facets of Christianity in Africa from its early origins up through the 20th Century and the post-independence period. It continues with an examination of the most significant historical sources on early Ethiopian Christianity and the debates around its foundation. These can be summarized in two parts: the first relies upon documents furnished by the Coptic Orthodox Church, which held a dominant position until the fourth century CE, when Athanasius, the Pope of Alexandria, authorized Bishop Frumentius (also known as Abuna Salama) to work in King Ezana’s court. The other major cluster of sources is the wealth of Ethiopian archaeological and textual evidence, in dialogue with Syriac and apostolic evidence.

Under these two interpretations on the competition over denominational precedence in Ethiopia, the recognition of individual and irregular Christian presence in Ethiopian queens courts has been observed since the first century CE. Throughout Ethiopian history, it should be noted that ecclesiastical regulation very often was transmitted through, and with support from, the Church of Alexandria. Of course, the arrival of Christianity in Ethiopia had long preceded such ties, especially when one considers the strong influence and relationship with the Syrian Church.

The historical relationship between the Egyptian Coptic and Ethiopian Church is one of the topic’s most significant touchstones. The author dedicates substantial attention to the subject given its salience in understanding contemporary features of the Christian landscape in Ethiopia. Abyssinia’s relations with the pre-Islamic Arab Peninsula also enters into detailed consideration, which can be demonstrated through close examination of cultural and linguistic influences.

The book goes on to explore the special testimony of Pope Shenouda III’s envoy to the Ethiopian Church in a 1997 bid to restore amicable relations and peace between the two. It recounts the messages exchanged between the Head of the Egyptian Church and the Ethiopian Church. The latter expressed their respect and recognition of the motherhood of the Egyptian Church, but who responded in a folksy yet pointed way, noting that “a young daughter shall not remain under her mother’s tutelage for life. She grows, and at some point, must leave her mother to become an independent woman.” Such testimony well illustrates circumstances of the history of the Ethiopian Church’s separation from its Egyptian progenitor in 1959. The study also chronicles the subsequent branching off of the Eritrean Church from the Ethiopian Orthodox Tewahedo Church. The latter owed much to the persistence of Eritrean President Isaias Afwerki, who visited Pope Shenouda III in 1998 and requested that he personally ordain an independent patriarch for his country, which he eventually agreed to do.

Ethiopian Christianity, as elaborated in the studies of this book, encounters several narratives that are often intertwined. First is the European narrative, which, awakening late to the deep Christian roots in Ethiopia, highlighted the Portuguese role in countering the attacks of Ahmad ibn Ibrahim al-Ghazi (“the Left-handed”) in 1535 in defense of the Ethiopian Christian Empire. The source of the second narrative is the Coptic Orthodox Church, which had regulated the affairs of the Ethiopian Church and ordained its bishops until it acquired its autocephaly under Pope Cyril VI. Between these two narratives arises the Ethiopian vision, which seeks to emphasize the peculiarity and authenticity of its experience, especially in the wake of political transitions which aimed at maintaining the State’s political and religious independence.

Ethiopian history is unique in several respects. It was one of the first states to declare Christianity an official religion in the 4th Century AD. Alone among the indigenous states on the Continent, it was never colonized by European powers, save for a brief five-year occupation by the Italian fascist regime in the 1930s. Some maintain this resilience can be attributed, at least in part, to the fortifying effect of a deeply rooted national Church.

Another study highlights two approaches to the formation of Ethiopian Christianity and its relationship with ethnicity. The first emphasizes Christianity as a force which supersedes ethnicity and views the Church, rather than the monarchy, as the connective tissue binding together otherwise fragmented feudal domains. The other approach notes the role played by coercion and official ideology in building the modern state, leading to the species of “phantasmic ethnicity” which Ethiopian Christianity was subjected to. In this view, Christianity was transformed into a sort of religio-nationalism through the restoration of the so-called “Kebra Nagast,” or “Glory of the Kings,” account. This has particular force with reference to the Amharas and Tigrayan identities which, in the view of one author, were subjected to “the risk of obliterating collective connections” in the process of state formation.

Due to the complex interplay between religion and the state in much of Africa, one study focuses on the Church’s role in the Democratic Republic of Congo (DRC), discussing the evolving relationship between the political authorities and the Church with a special focus on one dynamic: the tension between collaboration and accommodation on the one hand, and conflict and confrontation on the other. It details the Church’s role in the principal political transitions which marked the end of Joseph Kabila’s rule, as well as other landmark events.

The book examines radical Christian movements in Africa in an attempt to understand the impact of ethnic conflict and the faltering state ideology and state institution building on the continent. It tackles the Biafra Movement in the Nigerian South, the Lord’s Army in northern Uganda, as well as the Anti-Balaka Militias in the Central African Republic.

Think tanks specializing in African studies following independence were established in France, Britain, and the U.S. One study presents important as well as controversial conclusions, contending that these think tanks have supported the association of religion and state in Christian Africa, while insisting upon a rigorous secular separation in the West in order to avoid the sort of chronic sectarian confrontations which once plagued Europe. The study discusses Western intellectual trends on which such think tanks relied to approach the role of religion in African societies, such as the “structural-functional,” “conflict theory,” and “symbolic interactionism,” illustrating each with discrete examples.

One study attempts to examine the position of African feminism, using the term “white feminism.” It highlights the most significant literature of African feminists as they come to terms of missionary campaigns on the Continent, and their effects on gender and social roles. It introduces ideas from African feminists, such as Oyeronke Oyewumi and Filomina Clarice Steady, on the contemporary and “colonial” Church and its relationship to women’s roles and contemporary family issues. It also sheds light on certain extreme ideas concerning female genital mutilation, and their debates with Western feminism.

Al-Mesbar Center would like to thank all researchers participating in the book, especially our colleague Rita Faraj, who coordinated its production. We hope the team’s efforts will meet the high expectations of our readership.