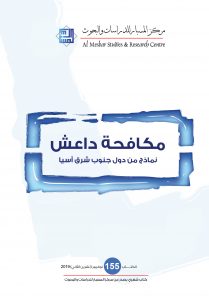 In its latest monthly book “Countering Daesh: Models from Southeast Asia” (Book 155, September 2019), the Al-Mesbar Center for Studies and Research examines the geographic spread of terrorist organizations across Indonesia, Thailand, East Timor, Singapore, the Philippines, Malaysia, Myanmar and Brunei. It focuses on the programs adopted by regional states designed to combat extremism. This comes within the framework of the governmental response to reduce the potential for Daesh to expand and exploit security gaps as well as preexisting hotbeds of ethnic and religious tension. The book also analyzes counter-terrorism strategies adopted as part of recently concluded bilateral and international agreements.

The studies deal with three main themes relevant to the struggle against Daesh. They begin with an analysis of institutional violence and the terrorist movements indigenous to Southeast Asia. The authors discuss regional patterns of dealing with the dangers of the spread of extremist ideas, the activities of terrorist organizations, and their attempts to control some charitable, humanitarian and educational societies, as well as the security threat they pose in attempting to occupy specific areas by force. The book outlines the development of international cooperation on regional counter-terrorism, with particular focus on the period following reports that Daesh’s center of command was slowly migrating from the Middle East into Southeast Asia. As such, the terrorist organization’s agenda and its ongoing dispute with Al-Qaeda and Daesh come in for special scrutiny.

Terrorist organizations have a longstanding interest in Southeast Asia, ever since some locals were enlisted by the Muslim Brotherhood in the 1940s. Extremists have long exploited the availability of social and economic environments conducive to the spread of extremist ideologies and anti-government sentiments. These and other factors facilitated the acquisition of new recruits. This was led by the deteriorating conditions of Muslim citizens in this region, especially in the Philippines, Thailand and Myanmar, doubly afflicted by their status as a religious minority and economically struggling. This has expanded the potential of creating a social and political backlog of grievances that could provide an opening for a political movement to exploit under pseudo-Islamic slogans. The upshot would be to attract supporters for carrying out a violent agenda that undermines public peace and the social fabric.

Terrorist organizations in Southeast Asia have emerged within a context of political and cultural turmoil whose roots extend back to colonial legacies and the fluctuating fortunes of the struggle for political rights. The tools for counting extremism and terrorism have been held hostage to an isolated internal political context, inconsistent interpretations of insurgency and terrorism, and other factors. However these tools have developed substantially following the latest wave of violent extremism that produced a range of local Daesh affiliates with extensive reach. Those affiliates enjoyed strengthened communications with the transnational networks of extremists, adding an external dimension which threatened the cohesion of the countries of Southeast Asia.

Subsequently, national and regional strategies crystalized around an international response to this danger, mobilizing affected governments to address the threat, and put in place bilateral and regional agreements to curb Daesh-related terrorism. These developments accelerated after 2014, especially once extremist organizations began employing new tactics associated with Middle Eastern contexts, including the recruitment of children, women and families. “The pragmatic jurisprudence of Daesh” had arrived in the countries of Southeast Asia, involving the participation of women in combat or military operations, and the use of modern information operations tactics, such as expert use of social media in order to attract young recruits into its extremist agenda.

The majority of the book focuses on ways to combat terrorism in Southeast Asia – with a particular focus on Daesh and its affiliates – through analyzing the legal and criminal frameworks governing bilateral and multilateral agreements. Some of these agreements were signed under the auspices of the United States, which transferred its multi-directional strategic experience in counter-terrorism operations to regional countries by launching multilateral initiatives focuse don numerous aspects of regional security. It also notes that China, the European Union, Australia, and Russia all play important roles in countering terrorism in cooperation with Southeast Asian governments.

As far as Russian involvement, cooperation between Moscow and the ASEAN (Association of Southeast Asian Nations) in counter-terrorism has been conducted within a multi-layered and long-term strategic initiative. As the book recounts, Russian has structured its regional outreach in the form of bilateral cooperation between each country separately. This cooperation takes place in the form of: supplying advanced dual-use weapons and equipment; training of individuals from ASEAN countries in Russia; the exchange of databases and operational information — especially with regard to the movement of those suspected of links to terrorist organizations, the fight against extremist propaganda, and financial intelligence aimed at detecting and preventing suspicious transfers of funds. In addition, there is an ongoing exchange of intelligence, as well as humanitarian, educational and cultural activities that, in a ‘soft power’ approach, help to strengthen ties between countries and develops civil societies in ASEAN countries.

In exploring the future of Daesh in Southeast Asia, the last axis of the book examines but ultimately rejects the possibility that a “caliphate” will be established in the region, instead leaning towards the possibility of fragmented groups forming rivalrous loyalties to either Daesh or Al-Qaeda. These groups pursue a range of often discordant goals, including the targeting of Western interests and regional states, civil institutions, and non-Muslim civilians. In addition to these threats are those emanating from the emergence and expansion of other Islamic organizations, according to security reports concerned with the countries of the region.

In conclusion, Al-Mesbar Center extends its thanks to all the researchers who participated in the book, especially our colleague Muhammad Mukhtar Kandil, who coordinated this issue.