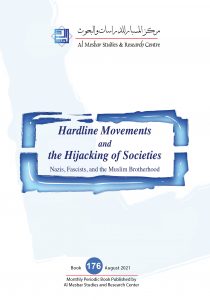 In its 176th book, released August 2021 and titled Hardline Movements and the Hijacking of Societies: Nazis, Fascists, and the Muslim Brotherhood, the Al-Mesbar Studies and Research Center examines examples of extremist political movements and organizations. These groups and their discourse have succeeded in hijacking broad swaths of society and poisoning the social fabric through a strategy of incitement that calls, in effect, for eradicating the Other. The book adopts a comparative analysis while also drawing both historical and contemporary lessons for contending with the dangers posed by such movements, with a particular focus on Nazis, Fascists, the Brotherhood, and the Far Right in both Germany and the U.S.

The book opens with a preface by the Iraqi historian and editorial board member Rashid Al-Khayoun, who suggested republishing an article by Iraqi historian Jawad Ali (1907-1987) that appeared in Al-Risala magazine in 1939. This article, as Al-Khayoun notes, highlighted the Nazi version of Christianity, which adopted a hostile stance toward all opposition parties, accusing them of negligence and of promoting an inauthentic version of Christianity. This stemmed from the Nazi claim to a monopoly on religious truth through “The National Socialist Party”, as the ostensible protector of Christianity. Ali indicated that the Nazis imposed what they called the “Church Tax” on “every German, whether they attended church or not” and subjected both society and the Church to an extremist ideology which, in several respects, overturned centuries of established teaching. Contrasting the two attitudes, Al-Khayoun observed that the Nazi creed bore striking similarities to that of political Islam in its rise to power. He also held that the two sides’ ascent to power had the effect of alienating many once-faithful members of their religion away, “swelling the ranks of atheism”, with the “Islamists founding another religion, just like the Nazis when they sought to establish a new Christianity fundamentally different from the one embraced by the Christendom.”

This comparison between the Islamist and Nazi movements is further elaborated by the second study, which directly examines the Nazi impact on the Muslim Brotherhood’s organization. This impact can be traced to three sources: the totalitarian essence common to both ideologies, Hassan al-Banna’s praise of Fascist discourse in 1935, and the mutual admiration between the two movements as reflected in their respective literatures. The study underscores each movement’s approach exploiting democracy as a means to achieving power, then destroying it. The two movements both disrupted the peaceful transfer of power when they won national elections, whether in the Germany of 1933, the Egypt of 2012, the Sudan of 1989-2019, the Gaza of 2007, and elsewhere. The study observes that violence was adapted within a broad spectrum of pragmatic options that cloak the movements’ totalitarian intent, rendering it difficult for self-consciously “realist” analysts to fully understand these movements.

A third study builds upon this the comparative research on Fascism and the Muslim Brotherhood. Although the two movements were linked early on among Arab researchers due to their close ties, such an association appeared late on the European scene. The study concludes that the two ideological orientations share a logical connection. Namely, they share a totalitarian premise as well as common adversaries in the form of Communism, Liberalism, and Jewry. The study investigates the intersections between the two movements, and observes that both attach great value to death, violence and anti-modernism, as well as a fixation with humiliation and revenge. The writer concludes that religious fascism represents Islamism’s closest ideological kin, given that both define themselves through their supposed superiority over the Other, and hold that their followers constitute a vanguard meant to save the world.

Extremist movements’ dogma of superiority, which reviles the stable (traditional) social order, is based on a process that fosters recognition of a social guilt — such as the fall of the caliphate or the dominance of the “inauthentic” — in the psyche of their followers. Accordingly, each recruit aspires to purify himself of “the presumed guilt” which the group’s indoctrination machinery works to exacerbate, even as it exalts those who yearn to rid themselves of the guilt. Seeking revenge on those who perpetrated, or tolerated, this guilt is elevated into a sacred duty, while those serving under the flag of the extremist movement are deemed to be members of a “vanguard” of saviors, tasked with leading society into an utopian era. In such an era, all citizens will be as pure and as faithful as the vanguard, while those who tainted by, or neutral toward, the sins of the old world are rendered extinct.

The book devotes special attention to the idea of cultivating victimhood and its relation to insurrection, revenge, and alienation from both state and society. In this context, it sheds light on the streak of opposition to the modern nation-state in Islamist movements’ discourse. Here, we find a study that examines the roots of victimhood throughout history. This attitude comes into sharp relief with the “Penitent (Tawwabin) Movement”. Even taking into consideration the different historical circumstances, one can trace a thread whereby contemporary violent religious movements utilize a sense of victimhood and list of grievances as pretexts for setting up a closed group. Such a group segregates itself by resorting to emotional strategies of isolation and fostering utopian expectations reserved exclusively for the faithful. It also stirs guilt complex feelings and a tailored mythology to politicize the religious and sacralize the political.

Several factors contributed to the evolution of the extremist Islamist movements in the Arab world, as a study by Emiriti intellectual and academic Abdullah Al-Haj notes. This study addresses the emergence of the Islamists, their fixation with avenging the fall of the Ottoman Caliphate, their approach to the Arab defeat of 1967, and the manner in which they mobilized society and freighted it with deep-seated feelings of guilt. The violent nature of all these totalitarian ideas was crystalized in Sayed Qub’s book “Milestones Along the Way”, which constituted a plan of action for the vanguard.

Hardline social movements tend to hide their zealotry and seclusion in their early stages, adopting a hush-hush approach to social issues. They gradually begin to unveil their more controversial ideas, including symbolic violence, portraying themselves as the representatives of a large segment of society. Soon after, they promote their offense-oriented ideas as a social creed, until symbolic violence evolves into real violence. In this regard, one study seeks to examine the representations featured in political caricatures in the Nazi newspaper Der Stürmer. The study highlights how violence is normalized by means of humor, with comedy exploited to inure the audience towards the suffering of the targeted groups, before inciting them to harbor hate and contempt as a preface to the physical encirclement and humiliation of the Other. This method relies upon both visual and rhetorical strategies that reinforce a given stereotype. Though the newspaper flourished in a democratic environment, it worked tirelessly to destroy pluralism by publishing a racist, eliminative message.

When extremist Islamist movements gained control of some Arab countries, as for instance when ISIS captured Mosul, questions were posed about the intellectual class’s resistance to such domination. These questions still echo today. Here, one study opts to introduce an answer derived from another experience. It investigates two examples of Serbian intellectuals, namely Miloš N. Đurić and Dušan Nedeljković, who lived in the Nazi era and whose thought was deeply influenced by their ordeals. They represented two approaches of confrontation and covert resistance, as they both took part in dismantling the structures of the tyranny Nazism that is no different from the fanatic totalitarian Islamist dictatorship in terms of discrediting the other.

The Nazism used to feed off a conspiratorial anti-Semitism, and other extremist movements have shared their affinity for conspiracy theories. Numerous modern studies traced the common features between this variant of extremism and its opponents. One of these studies covers modern anti-Semitism, its varieties and salience, and how it was influenced by the Frankfurt School. This work detected the efforts of six researchers, namely Karin Stögner, Samuel Salzborn, Volker Beck, Sina Arnold, Matthias Jakob Becker, Günther Yunis Jikeli. These cultural experiences constitute a touchstone that, among other factors, explains why these German researchers were collectively keen to dismantle the roots of Nazi extremism, and elucidate its dependence on anti-Semitism.

What meaning does the fall of a fanatic movement carry with it? One study tried to answer this questions by handling the collapse of Fascism and highlighting what lessons can be learnt from it. At the same time, it sounds notes of alarm in remarking “how fragile and reversible the democratization project is.” This study’s pessimistic outlook is in large measure the influence of Dutch political scientist Cas Mudde, who argued that “extremism is not merely a perverted disease, separable from mainstream society.”

In considering solutions, therapeutic models, ways to uproot collective extremism and assist others to quit the fanatic organizations and radical thinking, another study addresses Right-wing extremism in Europe and the techniques used to deradicalize their members. It gives particular focus to the “Exit-Germany” initiative for combatting the extreme Right. The study provides a detailed account of such extremism, and tracks attempts to reverse it, which later developed into endeavors seeking to pave for “the emergence of post-extremism man.” The initiative also took exemplary steps towards putting an end to bigotry by supporting the democratic values, recording testimonies of former far-Right activists, and broadcasting them as a part of a broader media campaign to immunize society and even former extremist adherents.

Another study touches upon extremism in the U.S., underlining the case of the Proud Boys organization, categorized by the Federal Bureau of Investigation as an extremist group that is thought to have a military wing. The group’s main ideologue argues that violence is the only way to eliminate the unholy alliance of globalism, the extremist Islam and Communism. It is noteworthy that the Proud Boys publicly promotes an anti-feminist discourse, and even calls for returning the gender roles of pre-1950s America.

In conclusion, the Al-Mesbar Center would like to extend its appreciation to all researchers who contributed to this book, particularly colleague Jomana Manasra who coordinated this issue. Hopefully, you will be satisfied with the outcome of Jomana and the work group’s efforts.