ISIS, Its Siblings, and Their Parallels: Ideology, “Takfir,” Texts 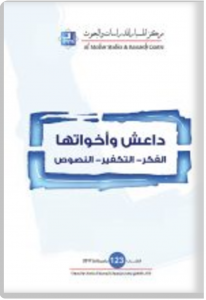 In its 123rd monthly book (March 2017), Al-Mesbar Center pursues its research into the phenomenon of “Da’esh” further by attempting to dissect the narratives the group has adopted and used. Our book focuses on the ideological development of Dae’sh and the history of the relationship between it and Al Qaeda, in light of a discourse that tried to portray the latter as a moderate jihadi wing. The book examines, via comparative analysis, the theological, ideological, and jurisprudential aspects of both Daesh and Al Qaeda as propagated by the books the two groups have published.

Da’esh was born out of Al Qaeda, then developed into a separate entity. Nonetheless, the theological and jurisprudential reasoning of both remain consistent. For example, both groups declare Shi’a, secularists, and Arab regimes to be “infidels.” Both agree that armed Jihad must continue, and reject accusations of ultra-fundamentalism (Al-ghu-lu) and comparisons to the “Khawarij” sect. Thus despite their public falling out, it appears that the dispute between the two is more a rivalry than a disagreement. A superficial observation of the dispute would assign it to ideological differences, but in truth, at the core lie political and regional rivalries. Al-Qaeda, on one hand, urges that jihad take aim at the United States and Israel. Abu Mus’ab Al Zarqawi, and later Da’esh, believe that jihad against Shi’a was the priority as the “near enemy” should be the initial target. Thus the war between Al Qaeda and Da’esh should be understood as an internal political schism. The military and political struggle in Iraq during following the U.S. invasion — and the rise of Iran-backed Shi’a Islamists in the country and beyond — provided the political context.

The book also notes how the Salafi jihadi movement in Gaza Strip — archenemies to Hamas — have pledged allegiance to Da’esh while employing narratives aimed to discredit the Hamas’ leadership by highlighting the latter’s connection to Iran and Hizbollah.

A historical departure is also presented. To understand the roots of “Takfirism,” it is necessary to go back to the seventies and eighties of the last century when “Salvation from Hell,”, one of the most radical groups of the time, emerged. The group practiced “takfir” on a grand scale in targeting societies and governments. Members of the group’s leadership departed to join other terrorist groups.

Da’esh atrocities are not new to the world of jihad, but they appear new to the contemporary observer. The Islamic Group in Algeria in the 1990s brought terror and brutality on par with Da’esh. The book shows that the difference was a relative lack of international media coverage. Da’esh succeeded in spreading outside Iraq for political reasons.

The book also present a geographic departure — to West Africa — in a separate research paper. It traces the formation of Al-Qaeda in the area, highlighting local changes that proved a boon to Da’esh.

The book includes testimonies from Jihadi insiders and exposes the ideological blueprints of Da’esh and its predecessors. in an attempt to comprehend the ambiguity of Da’esh.

In coming months, Al-Mesbar Center will continue its series of ideological examination of Da’esh in an attempt to fill the information gap on the subject in Arabic libraries.

The center would like to extend its thanks to all the book’s contributors — particularly Maher Farghali, who coordinated this edition.