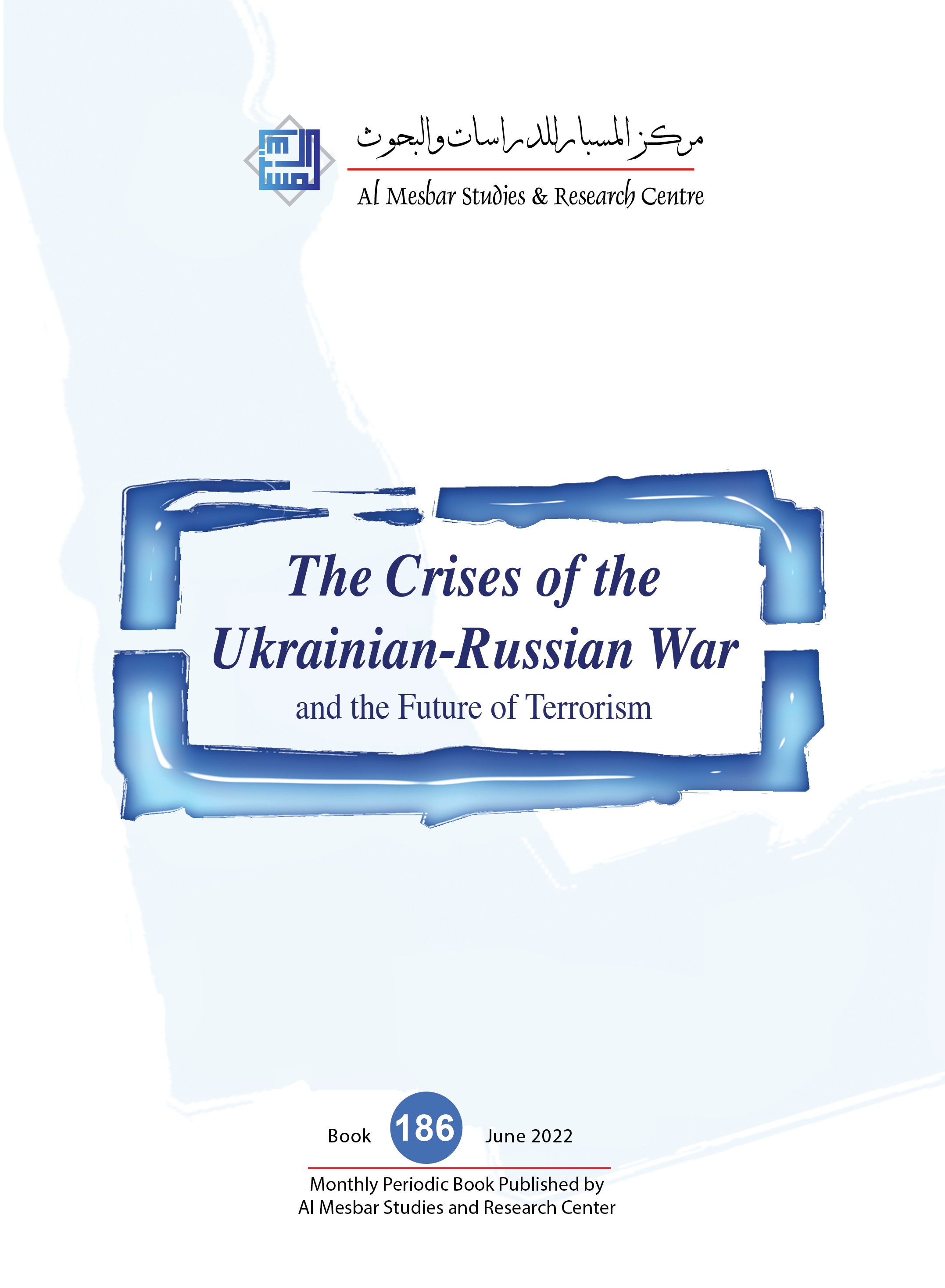 In its 186th monthly book, released June 2022 and titled The Crises of the Ukrainian-Russian War and the Future of Terrorism, the Al-Mesbar Studies and Research Center breaks new ground in a nuanced and layered investigation of how Islamist extremism can follow in the wake of great power conflicts and the security vacuums they often engender.

Geographically, the book covers territory adjacent to previous editions, which dealt with the study of Islam and politics in Central Asia and Northern Caucasus, Christian conservatism in Eurasia, nationalist currents in Russia, and the geopolitical effects of the events in Afghanistan. This book also intersects with two of the Center’s long-standing research tracks: the study of religious, national, and right-wing extremism, and the process by which terrorist groups cluster into safe havens that provide a welcome environment for training, experimentation, and recruitment.

It has long been understood that extremist groups profit greatly from the breakdown of state structures. For that reason, Moscow’s invasion of Ukraine and the consequent intensification of Western-Russian tensions represented a dismaying development for those studying extremism and terrorism. The first great power conflict in Europe in decades, the war naturally has major humanitarian and economic repercussions. Ideologically, it is likely to fuel extremist currents of multiple varieties.

This latter point has manifested already in the calls for transnational recruits to volunteer to fight under either the Russian or Ukrainian banner. Despite the impediments, numerous veterans and other soldiers of fortune have been recruited. And some, it has been alleged, had previously fought in terrorist groups. This new twist on the old phenomenon of “foreign fighters,” has sparked both confusion and intense discussion surrounding the basic concepts of terrorism, extremism, nationalism, conservatism, and separatism.

The book begins with a legal definition of the concept of “foreign fighters.” From there, it moves to examine those fighters’ activity in Ukraine since 2014, the expansion of extremist groups in the country, and the resulting repercussions. It surveys terrorist groups active in the Caucasus and Central Asia, and contrasting them with the nationalist currents in Ukraine. Several studies take a comparative perspective, viewing foreign fighters in the Ukraine in relation to the infamous “Afghan Arabs,” and attempting to assess the likelihood that the former will replicate the behavior of the latter upon return to their home countries.

One conceptual study discusses the legal dimension of the concept of ‘volunteers’ and ‘foreign fighters’ involved in the conflict. This study tests and evaluates the legal legitimacy of this phenomenon, within the framework of international law. A Lebanese researcher and jurist, Faten Faraj, presents this study, complementing her previous work on the dialectic of the definition of terrorism.

The next study deals with the on-the-ground element of the phenomenon of foreign fighters in Ukraine since 2014, and does so by focusing on the growth of international armed groups themselves. It outlines the history of their involvement in conflicts outside their countries of origin, and the various justifications that the belligerents have articulated for enlisting them into the conflict. In a remarkable finding, one study notes that roughly one-third of named Russian casualties are not even Slavic by origin. The researcher seeks to establish links between Ukrainian nationalist battalions and transnational European elements, cautioning against the militarization of far-right movements, an ongoing process that may be accelerated by the conflict.

The flow of foreign fighters to and from Ukraine is the subject matter of a study that covers the expansion of extremist organizations in Ukraine and its ramifications. Eastern Ukraine has, since 2014, turned into a rallying point for opponents of Russia and its allies. Although the study refers to Ukrainian efforts that led to the arrest of Al-Bara Al-Shishani in 2019 in Kyiv, it also notes that he had remained safely hidden there for two years. This suggests a degree of laxity in dealing with Chechen extremists on the part of Ukrainian authorities.

The study notes that Chechen fighters, originating from the Georgian region of Pankisi, returned from Syria directly to Ukraine, sheltering in the Carpathian Mountains. This drew the ire of the United States and the European Union toward Ukraine, which was effectively sheltering ostensibly “Anti-Russian” Chechen forces that arrived after 2014. These began to consolidate with fighters from European countries into battalions. The most famous of these is the brigade formed by the “Johar Dudayev” and “Ahmed Zakayev” battalions. After hostilities commenced, some two hundred foreign fighters were effectively transferred from Syria to fight alongside Ukrainian forces. The study hints that the gathering of foreign fighters in Ukraine was not an oversight, and intimates that “returnees from Ukraine” may constitute the epicenter of future instability.

Another study focuses on the impact of the present conflict on the resurgence of various armed Islamist groups. Several of these are active in the North Caucasus and Central Asia, probing for opportunities to exploit the chaos and arm flows into Ukraine. The author quotes the commander of one of the anti-Russian Chechen battalions who recounts that “we announced a camp in Europe in 2014 [and] within two weeks, there were 600 people in our ranks. One third of them came to Ukraine.”

One author examines the Muslim Brotherhood in Ukraine, its institutions, and general standing. The study outlines the demographic distribution of the local Muslim population, as well as the structures for their representation. The researcher sketches some of the principal factional elements and conflicts, focusing on the “Ukrainian Association of Social Organizations” (Al-Raed), and its role in creating an organizational culture, somewhat marked by the Brotherhood’s ideological influence. The association sheltered several figures affiliated with the International Organization of the Brotherhood, among whom were some convicted of acts of violence and terrorism in Egypt. The study accepts as credible the postulated link between the Association and the Brotherhood, based on the researcher’s visit to the Association’s headquarters, examination of its library and careful study of its discourse. In grappling with the association’s posture toward the current conflict, the author carefully analyzes its fundraising, noting the presence of groups of fighters who have not joined the Ukrainian army, but opted instead to join one of the independent military battalions and brigades that include European Ukrainians, Chechens, and miscellaneous natives of the Caucasus.

Some have contended that those elements affiliated with “Ukrainian nationalist brigades and parties” represented the backbone of the “resistance to Russian expansion.” Others harbor suspicions that these parties represent a new axis of extremism, tainted by neo-Nazi influences.

One study systematically dismantles this charge. First, it outlines this trend’s historical context, beginning with the complex and shifting alliances of the World War Two era. While Ukrainian nationalists did temporarily hope that an alliance with Nazi Germany could free them from the deprivations of Stalist rule, those hopes were swiftly dashed when Hitler rejected Ukrainian independence and led a campaign of arrests against its advocates. These were led by Yaroslav Stetsko (1912-1986), Stepan Bandera (1909-1959) and Roman Shukhevych (1907-1950). The researcher notes that the concentration of the nationalist movement in the Ukrainian West is due to factors such as population density, the accessibility of grievances, a climate of intellectual openness, and a linguistic and cultural cleavage from the Russian-speaking and Orthodox east of the country (the majority of the national leaders were both conservative Catholics and Ukrainian-speakers).

The far-right affiliations of the Azov Regiment has, to a considerable extent, formed the basis for many attacks on Ukrainian resistance to Russian encroachment. Its explicit slogans against feminism, liberalism, and democracy have alienated some of Ukraine’s allies in the U.S. Congress. One study goes so far as to compare the Azov battalion to terrorist groups. Hence, the books’ editors felt it important to include translations of the two most prominent articles defending the battalion, written by Ukrainian journalists Gala Sklyarevska and Stara Alina.

In one essay, “Ukrainian War, Extremism and Violence in Europe,” the author sketches a pessimistic scenario which assumes the involvement of Islamist groups in the conflict. After identifying most prominent names and relevant trends, he examines what might result from their return to their home countries at the war’s conclusion, and what challenges they might pose to the security environment.

Other essays seek to assess the extent of Europe’s readiness to continue to prioritize counter-terrorism efforts, in light of the continents re-orientation to face the Russian challenge, with all its potential complexities. One breaks down terrorist attacks according to their animating ideological background (religious, right-wing, left-wing, and separatist), during the 2007-2021 period. It also notes the effect of the economic crises stemming from the conflict with Russia, examinging their impact in the light of an increasingly mobile and transnational threat environment, one that opens new opportunities for now-dormant Islamist groups to exploit within the European Union itself. The study also presents a “positional assessment” of the conditions faced by some European countries that face elevated risk of contending with such a scenario.

A later study discusses the impact of the Russian-Ukrainian conflict on ISIS’s attempted resurgence in the Middle East. In the worldview of the latter, the conflict is one that pits “Crusaders against Crusaders.” In his study, the researcher asserts that the war has eased the military and intelligence pressure on the terrorist organization, and makes the bold contention that “America and Russia have abandoned counter-terrorism in the Middle East.”

Another study traces the outlines of the American-Russian contest in Syria, as Russia’s military intervention resulted in a surge of tens of thousands of fighters from Europe, the Caucasus, and as far afield as  China to join the Syrian war. With regard to the Libyan file, the author notes that it has effectively become a proxy struggle between the U.S. and Russia.  The study also analyzes France’s unique policy portfolio in Africa, which has resulted in a tripartite conflict and led to a series of coups that were linked to a series of disturbances which began in 2011. The study concludes that the ongoing conflict may well produce security voids and turmoil likely to facilitate a resurgence of extremist groups in the Middle East.

Towards the conclusion, the book suggests that we may be witnessing a repetition of the Afghan model in the Ukraine war. One author weighs the military balance between the Soviet invasion of Afghanistan in 1979 and Moscow’s current incursion into Ukraine. On the other side of the ledger, the “Afghan Arab” phenomenon begs comparison to thousands of nationalist foreign fighters who have been drawn to the conflict in support of Ukraine. It need not be stressed that many complex factors and a long historical process were required before “volunters in support of the Afghans,” ultimately bloomed into a transnational terrorist phenomenon. A number of these factors are not present in the current conflict, from a shared religious framework to a clear and activist ideological incubator of extremism.

Global attitudes towards the Ukrainian-Russian war have stirred already-troubled waters. In this environment, Moroccan author Mohammed Boubouche focuses on what he describes as “the risks of separatist tendencies,” and concludes emphatically that international law does not grant an automatic right of secession to ethnic groups seeking independence from an existing state.

In conclusion, the Al-Mesbar Studies and Research Center thanks the researchers who participated in the book, as well as those who assisted in its preparation and editing. It extends special thanks to the colleague Mr. Munir Adib, who coordinated this issue. We hope it will find favor with you, the reader.