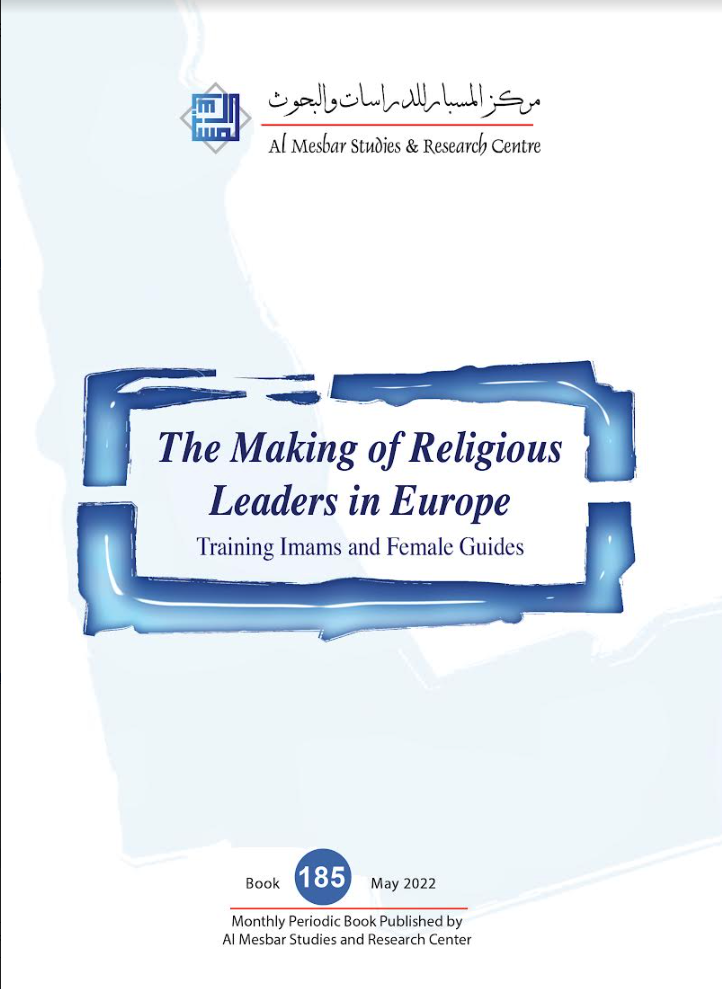 In its 185th monthly book, released in May 2022 and titled The Making of Religious Leaders in Europe: Training Imams and Female Guides, the Al-Mesbar Studies and Research Center continues its exploration of European Islam, as well as the ongoing attempt by Islamist groups to hijack the representation of European Muslim communities.

This book raises questions of spiritual care, individualized Islam, institutional extremism, and foreign interference, and concludes with an examination of the proposals for developing training curricula based on locally rooted discourse. To be viable, such proposals must be rooted within a professional context based on balancing core tenets of faith with subsidiary branches of religious knowledge, and refrain from politicizing the spiritual lives of the average believer.

The book attempts to root an understanding of the role of Muslim religious leaders,  including both female spiritual guides and Imams, in European societies. It examines the means by which they are trained and details the historic experiences of several European countries, tracing both the high and low points of those efforts. Several studies examine the theoretical underpinnings of Imam training programs in predominantly secular European environments. They seek to offer a philosophical guide for developing a modernized religious discourse suited to the local context. Only by achieving a spiritual equilibrium can retrograde and extremist elements be truly marginalized. One study puts forward the notion of ​​“civilianizing” religious reform. In so doing, it furnishes raw material that can be utilized in contending with the complex issues of educating, training, and forming Muslim religious leadership within a European context.

The book’s constituent studies emphasize the importance of the role of “institutional Islam” in the proposed training projects. In the course of providing a historical overview, one study focuses on religion’s role in the modern state, and traces in detail the ramifications of key concepts upon Muslims who enter Europe regarding culture, context and values in the context of this study. The researcher warned against the domination of ‘political Islam’ over the management of religious affairs, and advised for going towards the invoking localization and institutionalization of the Imamate in Europe.

The second study, authored by the anthropologist Martijn de Koning , concludes with a different vision. He calls for independent training and offers a critical review of Dutch Imam training programs. His study probes the reasons behind the failure of existing programs and explains the flaws in the initial treatments that previous programs and initiatives were forced to adopt. It also examines the repercussions stemming from what he perceives as the “racialization” of Islam and the Balkanization of its social and political causes. This process led to a sort of religious negotiation, which led inexorably to public debate regarding the compatibility between Islam and democracy. This dynamic had an almost interrogatory aspect, placing Muslim immigrants on the defensive, and implictly pitting them against the State.

The study refers to the contributions of the French-Algerian thinker Mohamed Arkoun to the public discussion in the Netherlands. Arkoun spoke before the Dutch parliament in 1994, saying, “If you continue to view training Imams as an exclusively Muslim issue, you are slowing down the process modernization. If Islam is kept in the margins, through all the well known means, then you cannot complain when the integration fails.” The study calls to mind the pressures emanating from both outside and inside Muslim societies on this subject, while also indicating that the debate is influenced by “the presence of Islamist organizations that seek to control Islamic education.”

Despite the book’s contribution to articulating the need for developing and localizing programs, it also adds an important observation: “The mere imposition of ‘forcing the people to speak Dutch’ is not a solution; it is in fact one of the causes of extremism in Holland. The primary sources that were translated in the 1980s and 1990s and distributed across various curricula were often taken from extremist sources. This contributed greatly to the wave of extremism of 2000s.”

Researcher Julien De Wit conducted a field study on “The Role of Imams in Rehabilitating Young Extremists”. At the outset, she defines Imams as religious leaders whose mission is not much different from that of the Christian priest or the Jewish rabbi. They serve as the “link between the Muslim and his religion”, and may well hold the keys to the success or failure of integration, of extremism’s contaiment or metastization. The researcher examines the principle actors in the training programs of the Netherlands and Belgium and outlines the risks involved. She observes that some Imams preach hatred and engage in a discourse that cannot easily be reconciled with the guiding principles of Western society. She points out that they are also isolated from mainstream society, to a degree that drives the youth to seek out other sources of authority. These ultimately reinforce their isolation from their families and society, and infuse them with a new, more ideological identity that tends towards separatism. In short, the problem of radicalization, the author argues, is a modern problem, which calls for a modern program and modern Imams.

The Imamate in Europe was a form of a volunteering activity, and it was not easy for the State to intervene directly on religious matters, especially in the secular European environment. Doing so forced authorities to recognize the new religion, which then obliged it to allocate expenses and define its scope. An extended period of uncertainty and negotiation followed, along with a number of crises adumbrated in a subsequent study: the dangers of terrorism, takfir (the excommunication of other Muslims as infidels), extremism, a chaotic environment of fatwas and counter-fatwas, and a general imbalances of identities. This study delves into the differences between various generations of migrant Imams, the problems inherent in a voluntary and migratory institution, and these Imams’ checkered relationship with the emergent schools of confrontational and conspiracist ideology. It reviews the Austrian experience — from 1912’s “Islam Law” to the establishment of the “Islamic Religious Society” in 1979, which provided for religious education at the University of Vienna, but failed to reach out to the Imams’ training programs. The author also traces the historical experience of  the German model, where government-run programs to train Imams began offering instruction in 2021.

A follow-up study discusses the assumptions that Imams provide an objective counter-weight to advocates of terrorism and radicalism. The study notes that Imams in Europe generally do not gain influence from their official position, but from their digital following. It also hints that “religious leaders can no longer claim that their followers and disciples would still owe them loyalty and obedience as long as they live”. Therefore, digital techniques are employed to further develop the Imams’ training program, relying on the full spectrum of modern analytics tools.

In the context of forward-looking proposals, researcher Wim Van Ael presents an initiative to develop social media communication techniques. He begins with the discourse of doubt and developing a series of methods derived from the Prophet’s biography. He designs a template for the Friday sermon, proposing the creation of a Central Council to modulate it, while leaving the question of its leadership open ended.

Developing new forms of discourse requires a sort of “philosophical tool-kit”. This is precisely what philosopher Geert Cornelis puts forward, in a philosophical account of the roots of pluralistic education. There he attempts to deconstruct the certainty of sensory perception, before assembling coherent narrative structures featuring binary ideas with both exoteric and esoteric aspects. This approach relies on both empirical research and systemic skepticism, its watchword being “things are not always as they are perceived, and the world is not always as it is believed”. Throughout, the ethical presumption remains one of reciprocity and respect for the Other.

In his chapter, Sergio Saleem Scatolini puts forward proposals for the modernization of religious thought and discourse in Europe, stressing various procedural imperatives.  As far as Muslim Imams are concerned, they must unequivocally accept “diversity”, and recognize the essential religious characteristics that are distinctive of Europe. For their part, European governments must recognize “religion” as a reality and extend a posture of understanding the features of both religious and secular ranks. Scattolini also believes that the religious community should expand the concept of “guidance”. The writer’s article here organizes and arranges the values ​​that indicate strengthening the ambient social values of fairness, solidarity, and moderation. It almost reached an expanded understanding of the principle of al-ma’ruf (virtue) in Islam; which expands good custom and invites all believers to compete with one another in the performance of charitable works.

The study authored by Younis Al-Ahmadi presents the issue of the problematic dialectic of “secularization of religious reform”, as adumbrated by the Tunisian thinker, Muhammad Al-Haddad. Although this theory has been developed considerably since its beginnings, the researcher was limited to the primary sources written by Al-Haddad. As a result, the study focuses on Al-Haddad’s application of the critical methods in understanding religious reform, and distinguishing it from the notion of tajdeed (renewal).

The last study reviews the social and political development of the Kingdoms of Sweden and Norway and recalls the humanist nature of those states’ experience. The give-and-take between  the religious establishment and the political actors, indicates that novel experiments can be undertaken and provide inspiration, but absorbing their requirements requires great foresight and sophistication.

The questions raised by this project continue to expand in scope, but they indicate the possibility of building identities consistent with their context. They may indicate that the lives questions in the European context have answers which are slowly taking shape in official circles.

In conclusion, Al Mesbar Studies and Research Center would like to thank all the colleagues and fellow researchers who participated in this book. Particular thanks go to Brahim Laytouss, who coordinated the issue, and Fahad Soliman Shoqiran. We hope it will find favor with you, the reader.