Islam in France: The Brotherhood, Terrorism, and Treatment 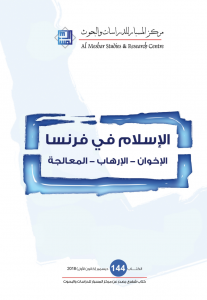 Of all the EU countries, France is among the most involved in political and religious debates affecting the administration of Muslim communities within its territory. The interest of key stakeholders in this critical area has risen in recent years due to many factors, foremost among them an influx of migrants fleeing conflicts in the Middle East and African countries as well as the increasingly frequent terrorist attacks on French soil. The surge of the new right, combined with long-simmering nationalist and populist dispositions, has put more pressure on French Muslims, on the Islamic institutions which purport to represent them, and on local political authorities. All of whom have been locked in the decades-long pursuit of forging a “French Islam” that offers the prospect of coexistence between the principles of the French Republic and Islam.

Al Mesbar Center’s Monthly Book, Islam in France: The Brotherhood, Terrorism, and Treatment, (book number 144, December 2018) features and highlights the various views, ideas, and approaches to the project of “French Islam.” The book gives particular attention to the period following the bloody attacks in Paris in 2015, which deepened public and official concern over the escalating repercussions of terrorism and desire to protect the “values of the French Republic.”

The book’s studies analyze the deeper motives underlying French initiatives to integrate Muslim communities into French society. Several note that “stringent secularism” alone is not the basis for the emergence of “hostile” tendencies among some Muslims, even those who assign priority to religion in their worldview. Among those Muslims resistant to integration, the more potent factor is the activism of Islamist groups, led by the Muslim Brotherhood, who have worked for many years to enhance their organizational and institutional “depth” in France. These groups attempt to exploit the sense of “identitarian oppression” in winning new converts. Both the Brotherhood and other Salafi movements support themselves through “covert Islamization” strategies. Perhaps the most dangerous factor imperiling French values and principles is the “motive of Islamic fundamentalism,” not merely because of its destructive effects on identity, moderation, and communal harmony, but also for its terrorist roots and ideology. Lastly, the book seeks to study how French authorities have endeavored to counter terrorism.

Islam in France: The Brotherhood, Terrorism, and Treatment deals with the Muslim Brotherhood in France, its origins, and its covert activity in the country. One study examines the principles of Fiqh al-Aqaliyat, or so–called “minority jurisprudence,” on which the group relies in order to create an Islamist environment in which Muslims can live, on condition that they identify with the ideology. The group targets different Muslim groups, including students, women, and children, and organizes various types of educational, cultural, sports, and political events in order to divert Muslims  from an integrationist path consistent with the values ​​of the French Republic.

The book also concerns itself with the growing threat of extremist groups against France and jihadists’ efforts to enlist young Muslims in violent action outside the country. It analyzes terrorist recruitment through virtual space and social media, which has recently produced  the phenomenon of “latent terrorism,” not requiring an organization, hierarchy, or direct mobilization. Individual terrorist attacks threaten the security of many countries in the world, and France is one of the most vulnerable countries.

Some of the motives of Islamic extremism in Europe may be linked to a quest for identity, especially among the second and third generations of Muslim immigrants. Religion has become an essential criterion for young people living in European civil societies. However, the loss of religious authority does not in any way justify grave deviations towards fundamentalist violence which threaten national security. At the same time, it is clear that there exists as well a serious dilemma in France due to the difficulty of integration. This difficulty is sharpened by a French cultural model intolerant of religious elements, and a related difficulty in gaining acceptance among Muslims for the country’s mainstream principles, laws, and public ethos.

The book concludes that the existence of organizational Islamist movements in France poses an inherent threat to French national security. Advocates of political Islam, in addition to their hardline reading of Islam, adopt a style of rhetoric that is superficially pragmatic but substantively radical and subversive. They have sought for decades to build a firm base of support for themselves, ignoring the unique character of other societies and their natural course of development.

Islam in France: The Brotherhood, Terrorism, The Treatment focuses on analyzing and understanding these pivotal issues, highlighting the history of the French struggle to attain the values ​​and principles of the French Republic, and examines the history and development of centers of “French Islam”. It does so not only at the level of political and cultural discourse, but also in terms of defining visions and means of implementation. Foremost among these is the training of mosque imams, the increasing scrutiny over funding of Islamic organizations, and the restructuring of Islamic communal organization in France.

Al-Mesbar Center would like to thank all the researchers who participated in the book’s production, in particular Maher Farghali, who coordinated the papers.