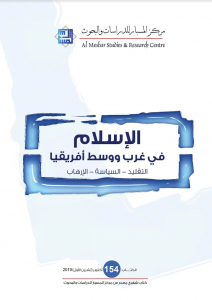 In its latest monthly book, Islam in West and Central Africa:  Tradition, Politics, and Terrorism (Book 154, October 2019), the Al-Mesbar Studies and Research Center continues to examine the interplay between Islam and the peoples and communities of different cultures, taking careful note of their differences and similarities. The study explores differences in the way Islamic influences permeate local society through text, custom, tradition and other means. It then examines their impact on the political landscape and the influence exerted by Islamist movements on peoples and communities of different cultures, which seek to impose their vision on Muslims in a number of African countries.

The book begins from West and Central Africa, seeking to illuminate the diverse map of Islam and its social and political manifestations in Chad, Nigeria, Senegal, Niger, and the Ivory Coast. These are countries where Sufi, traditionalist, and Islamist schools of thought have contended with one another since the mid-20th century. The latter in particular sought to impose an extremist identity foreign to the historical patterns established by most local Muslim societies.

The book pays special attention to the Islamic community in the Republic of Chad, chronicling the development of local traditional Islam, especially as manifested within educational institutions from an early historical stage. The Chadian ethnic landscape is exceedingly diverse, complicating the study of Islam because of its association with complex identities, especially if the linkage between religious and ethnic factors are analyzed within an anthropological framework. In addition, the book summarizes a panel discussion conducted by the Al-Mesbar Center for Studies and Research on the religious and political effects of neighboring countries on Chad.

Islam in Nigeria has recently been linked to terrorism through ‘Boko Haram’, the most dangerous terrorist organization on the African continent. This book investigates not only this terrorist organization, but also delves more broadly and deeply into the history of Nigeria. It traces the religious schisms that gave rise to today’s extremist movements, and searches for the links between these schisms to contemporary Islamist movements, as well as the impact exerted by the rise of Khomeinist Iran. The latter is examined from the standpoint of ideological, literary, and organizational ties. The study does not, however, neglect Nigerian Islamism’s relationship with traditional Islam, nor the attitude adopted by a conservative society towards it, nor its complex relations with Nigeria’s Christian community.

Islam in West and Central Africa presents a study which analyses Boko Haram from the standpoint of its incursions into Nigerian religious, ethnic, and political life. It contests the claim that the terrorist violence emanating from this group is merely a “religious jihad”, as the extremist group claims, as well as the notion that it represents merely a “tribal rebellion” against the Nigerian government. On the contrary, Boko Haram’s complex relationships render it a more complex organization, one founded on overlapping layers of interaction.

Niger’s population is composed of several different ethnic groups: Hausa, Djerma Sonrai, Tuareg, Biohel, Kanuri manga, Gorma, and Arabs. Demographically, Muslims constitute a majority of religious adherents, which also include Christians and traditional religions. The book presents a study of the history of Islam in Niger, in terms of the introduction of the doctrine of Imam Malik and the historical, religious and social contexts of various indigenous religious movements. It reserves special focus for the Sufi orders as well as Salafi preachers and activists.

The countries of Ivory Coast, located in West Africa, are characterized by remarkable religious and sectarian pluralism. Besides Muslims — which, according to some estimates, form a majority — there are Catholics, Evangelicals, Methodists and Animists. West African Muslims built an identity for their community and, despite numerous difficulties, succeeded in integrating into the political process. The progress they attained over time gave them full ability to take their place in political life; a place of significant importance resulting from a peaceful dialogue. For the Muslim tradition on the Ivory Coast leans heavily towards peaceful politics, as the book stresses. It worked to build a “peaceful internal nation” far removed from clashes with other communal elements.

In West Africa, Islam was influenced by two factors: the first was Christian and the second was Maliki. And while Christian-Muslim relations were strained in some historical periods, they calmed down at others. The book examines the relationship between the Catholic Church and the African continent throughout the early history of colonial-era tensions and during the great burst of evangelical activism, but reality today differs greatly from the past. African-Vatican relations have witnessed a remarkable development following visits by popes in recent decades. The book presents this relationship, revealing the aims of papal diplomacy and its new stakes based on “restorative diplomacy” and “maintaining dialogue.”

As for the Maliki doctrine, the book concludes with an evaluation of the various religious orientations within Morocco towards Africa. The Kingdom of Morocco has adopted a program of spiritual soft power, elements of which have succeeded in achieving many gains. These include imam training and the ideological fight against extremist thought, its importance and its modalities, as well as training courses in the field of religious leadership, which have helped to establish firm and balanced relations with a number of countries on the continent.

In conclusion, the Al-Mesbar Center thanks all the researchers involved in this book, and a special mention goes out to our colleague Idriss Lakirni, who coordinated its contents.