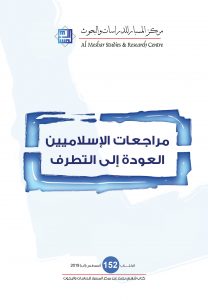 In its 152nd book — Islamist Revisionism: a Return to Extremism, published in August 2019 — Al-Mesbar Center examines a number of hypotheses regarding the factors and local contexts which forced several Islamist leaders and groups to reconsider violent tactics, but which ultimately failed to produce a systemic repudiation of violence. The book addresses certain the prevailing, arguably hasty conclusions, some of which hold that Islamist movements and groups have made a strategic decision to abandon violent paths, or to reconsider the political weaponization of Islam.

To a limited extent after 2001, and more broadly in the years following 2011, Islamists sought to polish their image and move public opinion toward the view that theirs was a “modern project.” An alternative view holds that the movement exploited political tumult and security disruption in order to pass an agenda redolent of Islamist ideology. One might also conclude that any Brotherhood discussions of a “strategic evaluation” — whether within prison cells or outside of them — have not truly grappled with religious fundamentals. Nor have they affected the governing rules of the ideology, which do indeed allow for the eruption into violence and systematic exclusion of the Other whenever the political need arises.

Indeed, there is a deep reluctance within the Islamist project to declare a break with its past by engaging in “critical reevaluations.” This reluctance, as one study shows, stems from the complications of post-affiliation life. It is difficult for an “extremist Islamist” to fully liberate himself from the confines of dogma. If it occurs spontaneously and without collateral complications, as it has to many former Islamists and Salafi jihadi figures, then they may evolve into advocates of Islamic enlightenment.  However, there is also a risk of recidivism into the radicalism they emerged from.

The book seeks to examine the series of  “strategic reevaluations” conducted by Salafi jihadist parties in the wake of the September 11, 2001 attacks.  It highlights how “such reevaluations are bound to certain contexts, as well as local, discrete circumstances. Often, this renders them little more than a ‘circumstantial emotional reaction,’ the purpose of which is to contain an immediate crisis and provide solutions on an ad hoc basis. Naturely, this does not contribute to the institutionalization of a “revisionist choice,” and falls well short of a comprehensive rethink of religious misconceptions deeply embedded in Islamist belief and literature. The deep and fundamental criticism of the ideas and practices of the past, has not been joined at the intellectual level to the establishment of a new ideology disconnected from the old and capable of shaping religious movements in the present and future.”

The Muslim Brotherhood in Egypt may be considered the “mother group” of Islamist movements since its founding in 1928. In its nearly 100 years of existence, it has not conducted any substantive critical reevaluations of its theoretical foundations. Nor has any notable exception emerged from the cohort of pragmatic politicians to issue from its ranks. The book engages with the factors preventing the group from conducting serious intellectual experimentation aimed at building a new system of thought and organization, one which refrains from exploiting Islam’s reservoir of religious capital and leveraging it in a unilateral bid to seize power.

Many scholars celebrated the phenomenon of political Islam, the so-called “reevaluations of the Egyptian Islamic Group.” Unfortunately, subsequent events have shown that they were unable to sustain a true break with radicalism and build a different vision that eschewed violence or animosity toward Egyptian state and society.

The book also examines Morocco’s model of activist Islam through the statements of some jihadi militants, tracing the extent of their influence and ideological frameworks. It also attempts to interrogate the shifts in contemporary Shi’ite activist political thought, which culminated with Khomeini and which answers to a single governing authority. In some respects, it converges with the views of Abu Ala Al-Mawdudi and Sayyid Qutb, each widely revered by Shi’a activists.

This book also touches on extremist discourse in Algeria, which seeks to homogenize Algerian Islam in its image even as it acknowledges that the Algerian Sunni space is complex, diverse, and divided into various substrata. The book includes a review of the book Progressive Islamists: Fragmentation and the Reestablishment which adds to the body of knowledge on the intellectual project undertaken by progressive activists in Tunisia in their struggle with political Islam.

Al-Mesbar Center thanks all the researchers contributed to the book, in particular our colleague Montaser Hamadeh, who coordinated its content.

The Meaning, Perils, and Promise of Protest: The Lebanese and Iraqi Uprisings