Manufacturing Fear: Extremism of the Far Right and Populism 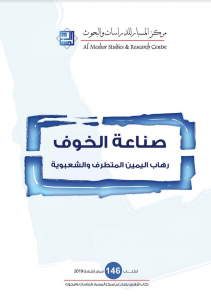 Al-Mesbar Center’s new book presents an outlook and analysis of growing political right-wing and demagogic trends in Europe, the United States, the Middle East, and India.

The collection of studies of Europe’s growing far right finds a relationship with neo-liberalism and the consequent increase in economic inequality among social strata. These trends can help to explain the surge toward radical ideologies and protectionist anti-globalization agendas — as well as xenophobia and hostility toward minorities, women, and democratic principles. One study commenced from the premise that “the conditions of the economic crisis develop forms of inequalities and represent fertile ground for irrational and violent manifestations.” This is accompanied by a revival of religious affairs of many societal sectors which find in right-wing parties a cradle for, and answer to, their concerns. This indicates that the loss of “economic sovereignty” contributes to heightened demands for “cultural sovereignty.”

One of the studies attempts to define the “far right” as an ideological grouping sharing the following characteristics: ethno-nationalism, xenophobia, opposition to democracy, and authoritarianism.

Some, viewing the advent of many right-wing parties to European parliaments as a “setback” for democracy, have called for a multidisciplinary analysis to understand the phenomenon, holding that it is not possible to rely solely on political or economic interpretations. They feel that a holistic approach is needed to assess the cultural, religious, and ideological dimensions. Perhaps through the analytical lenses of postmodernism and post-secularism, one can parse the factors that fuel extremist nationalistic tendencies that relate to calls for ‘de-globalization’ and closing borders.

The studies in this book address a number of parties described as “extreme right” in Europe, including the National Front in France and Alternative for Germany, which registered substantial gains in parliamentary elections that occurred between 2017 and 2018.

Despite the new weight this Right enjoys, it faces several obstacles. First, its program stands in opposition to widely held notions of “European values” which reject religious, political, and cultural extremism. This clash, moreover, is deeply linked to tensions between East and West and the explosive confrontation between the global North and South. That confrontation expresses itself in several instances — the most prominent perhaps being the moral challenges of immigration —most of which flows from countries of the Middle East and Africa. The book discusses extreme-Right perspectives on the migration issue, then compares them with those of the extreme Left.

The book also considers “masked nationalist” organizations in the United States — the most prominent example being the Ku Klux Klan — and draws two conclusions: First, the author asserts that “the increasing use of the internet and social media platforms by these right-wing groups and their supporters enables them to meet, mobilize, and plan for potential attacks.” Second, he maintains that “authorities are increasingly facing individual agents who commit violent acts in the name of an ideology that denies American civil liberties and fundamental human rights of all citizens and residents.”

Manufacturing Fear also examines Middle Eastern analogues to extremist movements, then treats another country, India. The latter  has witnessed a rise in hate speech and political violence, especially from its own far Right. The book dissects the historical progression in the formation of India’s national identity.

Perhaps those who criticize the extreme ends of the political spectrum — from a staunchly optimistic standpoint in this book — are betting on the inevitability of the extreme right’s retreat before the advance of lofty, democratic values.

Al Mesbar Center would like to thank all the researchers who contributed to this book — in particular Rita Faraj, who coordinated its chapters.