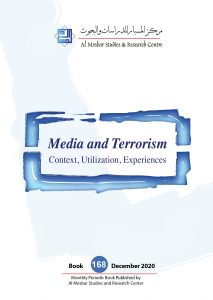 The 168th monthly book published by the Al-Mesbar Center for Studies and Research, Media and Terrorism: Context, Utilization, Experiences (December 2020), highlights the role of the media in dealing with terrorism. It selects models from among the different Arab satellite news channels, each of which exhibits various degrees of responsibility in their engagement with violence and extremism. It examines the resulting media content, particularly where it focuses on monitoring Islamist activism and related endeavors from the perspectives of mobilization, treatment, and criticism.

Terrorist groups have often targeted the media. Indeed, to the extent that these terrorist organizations prioritized their own media tools, they embedded themselves in prominent media platforms within their communities as well as certain state-backed media outlets. Often, they succeeded in turning television channels and nominally independent websites into tools for advancing their own objectives.

Traditional terrorist operations were primarily intended to attract media attention. By planning spectacular operations and carefully targeting innocent victims, they left traditional media with little choice but to highlight both the terrorists and their objectives. In response, one school of thought holds that the ideal approach for covering terrorism is to impose a blackout on the perpetrators and any information which might win them adulation. Others have adopted a strategy of political engagement by highlighting the underlying grievances espoused by terrorist groups, to the extent that some have come uncomfortably close to expressing sympathy for the perpetrators. Still another school views the media as a means to combat terrorism, by fostering a discourse centered around the values of sustainability, the celebration of life, and optimism for the future.

Of course, this does not mean that all channels address the question of dismantling terrorism with total responsibility, giving listeners access to transparent, impartial information. In the various conflicts with terrorist groups, coverage is sometimes at risk of politicization. One notable example occurred in the handling of the infamous Abbottabad Compound Documents dealing with Osama bin Laden and his inner circle. For several years, U.S. authorities chose to withhold information that did not serve the political agenda of the administration, particularly with regard to Al-Qaeda’s fraught but sometimes collaborative relationship with Iran. This information would have constituted a political liability for the Obama administration as it attempted to negotiate the JCPOA with Iran. The following administration, with no such commitments, was free to declassify the large bulk of the document trove.

On the other hand, investigative journalism played a prominent role after the terrorist attacks of September 11, 2001 in terms of mobilization. Arab names emerged to cover current events. On the day after the attacks, they hosted popular and acclaimed programs offering commentary and analysis. One of the book’s studies returned to investigate the roots of such commentary in the period of the Soviet-Afghan War. It notes with interest that the media darlings of that period would  go on to become crucial figures in the conflict with Al-Qaeda nearly a generation later.

The names of journalists affiliated with Islamist political movements shone in their movements during the war and years after, through an investigation of what happened. The dogged pursuit of terrorist figures has played an important role in mobilizing young people to fight, whether through direct recruitment or a more diffuse propaganda strategy. Ample testament to this comes from the experiences of Al-Qaeda and ISIS, as well as their various regional branches and affiliates.

The book also examines various “top secret” programs and assesses their handling of terrorist attacks against the United States. It focuses particularly on the constituent elements and discourse favored by terrorist orators, coupled with a close analysis of their narrative techniques, particularly for generating spectacle and suspense. By way of example, the study examines several televised documentaries based on interviews with Abu Muhammad al-Maqdisi, Abu Musab al-Zarqawi, and another with the commander of Syrian Tahrir al-Sham, Abu Muhammad al-Jawlani.

By contrast, several Arab states have sought to address media content that promotes terrorism, violence, and hate speech, and to do so with acute awareness of the media and legal responsibilities involved. They have gone to considerable lengths to combat the extremism promoted on satellite TV, social media, and the internet generally.

In recent years, the Kingdom of Saudi Arabia, the Arab Republic of Egypt, and the United Arab Emirates have all played a prominent role in countering extremism. The first two studies in the book analyze the Egyptian and Emirati experiences in combating extremism and hatred in the media. In the Egyptian case, it covers the development of extremist rhetoric in cyberspace and the technical mechanisms by which the relevant authorities may combat it, both in the courts and in the media. In the case of the United Arab Emirates, laws supporting media efforts and the role of research, cultural, and religious conferences and institutions are assessed. The study examines the tools and strategies adopted by the relevant governmental and civil institutions.

The book’s second study deals with the vital role of Saudi Arabia in countering terrorist media content, especially after 2003, which witnessed the first major terrorist attacks on Saudi soil. Authorities in the Kingdom worked on several fronts, including by enacting new laws, establishing new satellite channels, building counseling and rehabilitation programs, and launching more aggressive efforts to monitor the internet for extremist activity. Several distinguished information and research operations were conducted by both the private sector and official bodies.

Terrorism and its study are, of course, not limited to official media and the news screen. In both the Arab and Western worlds, the film industry has explored and produced content which opts to study the terrorism through an artistic lens. One study focuses on the impact such depictions by German cinema have had on local and European audiences. The study offers an overview of the depiction of terrorism from the vantage point of the technical study of narrative literature, analyzing various feature films and comparative documentaries.

Two studies discuss the American and Arab media’s handling of the Abbottabad documents found in the hideout of Al-Qaeda leader Osama bin Laden in Pakistan. The documents proffered a rich trove of material for experts, analysts, and followers of the Al-Qaeda terrorist organization. The studies focus on the goals of its gradual release, noting how various American administrations would employ them, and how they related to the U.S.’s relationship with Iran.

On the other hand, systematic media leaks concerning political leaders and heads of state have naturally had measurable impacts on public opinion. The study covering this theme notes its “great acceptance by the widest possible national and global audience, even by those not directly concerned or affected by it.” This psychological phenomenon undergoes extensive analysis in the book by Lebanese psychologist Professor Mustafa Hijazi, summarized in a special study that concludes that such approaches centered on misinformation are fundamentally unsound, both for the effects they have on the health of a given political culture as well as for distortions they work upon empirical truth.

The Al Mesbar Studies and Research Center thanks all the researchers who contributed to this book, especially our colleague Jumana Munasara, who coordinated its production.

Islam in Sweden: The Threats of Islamism and the Challenges of Integration