Muslims in Canada and the Challenges of Coexistence 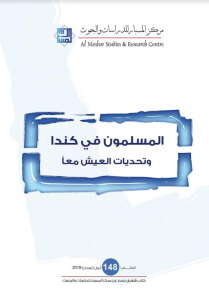 In the book Muslims in Canada and the Challenges of Coexistence, (the 148th book, April 2019) the Al-Mesbar Studies and Research Center discusses the situation of Muslims in Canada: their origins, history, social presence and communal tensions, comparing them with various other minority groups, many of whom have succeeded in integrating into Canadian society.

The studies, in which several research specialists participated, analyze the general patterns of how “immigrant Islam,” particularly in Quebec, interacts with a liberal democratic state and its neutral posture towards religious issues. The essays focus on a range of issues and include the following: “The Canadian Muslim Community,” “Canadian Secularism and the Quebec exception,” “The Origins of Canadian Muslims”, “Discussions on Religion and State Neutrality”, “Associated Demarcation of the Semantic Field of Coexistence’’, “The Threat of the Islamist Movement and Its Discourse”, “Islamic Elites and Patterns of Religiosity”, “Muslim Womens’ Activism”, “Participation in Citizenship and Cooperatives’’, “Islam in the Canadian Courts”, and “Legal Regulation of Halal Eating versus State Neutrality.”

Muslims represent about 3.6 percent of Canada’s total population, a relatively small religious minority. The community’s diminutive size stands in contrast to its long pedigree, which dates back to the Act of Confederation in 1871. There is a diverse pluralism among Canadian Muslims in terms of views, affiliations, degree of integration into the public order; like all groups, it should not be seen as a monolith.

Canada’s mainstream secularism poses a challenge to the state, especially in Quebec. Although the state lacks any religious character, and though there is no civil religion, there is nevertheless a liberal approach to religion which operates by means of technocratic management of existing pluralism. The state itself does not evince any secular, republican, French-style ideology.

Controversial events have rocked Quebecois society and disturbed the culture of coexistence which has been associated, to a considerable extent, with the absence of a horizon of communication and knowledge of the Other. This hashe led to the emergence of Islamophobia as expressed in different public controversies. One such occurred in 2007 in the village of Herouville, where the city council issued a ‘code of conduct’ for immigrants, which received widespread media coverage. This, in turn, led to the formation of an advisory committee to study issues pertaining to minorities, known as the Bouchard-Taylor commission. It issued a set of recommendations, ultimately favoring a policy of Canadian cultural pluralism.

A discourse of exclusivist identity propounded by extreme right-wing tendencies in Canada, along with the fear of nascent Islamist movements, combined to poison the public discussion of Muslim groups in a number of Canadian provinces.

The book examines the challenges posed to Canadian liberal democracy by extremist religious rhetoric and activism. It also interrogates elites’ efforts to reach broad consensus concerning the prioritization of rights and freedoms, the neutrality of the state as well as the limits of individual sovereignty and the right to social differences. The most important challenge facing Canadian Muslims is violent Islamist extremism that threatens coexistence and seeks to monopolize the right to speak on behalf of Canadian Islam and exclude Muslim democratic voices. For these reasons, it was necessary to study the Islamic movements in Canada, foremost among them the Muslim Brotherhood, and the resulting social and political threats.

Sunni Islamic elites in Canada are characterized by a multitude of ideological reference or principal forms of religiosity. The top three may be referred to as reformism, Islamism, and humanist liberalism. Who are the most visible Canadian elites who can represent these three forms of religiosity? What theoretical, philosophical, political, religious and moral model can it offer, especially to contemporary Canadian youth of Islamic faith and culture? In what way did the tension between these three currents contribute to the multitude of cultural choices (integration, religious pluralism, living together, extremism and violence in the name of Islam, Islamophobia, etc.), which these Canadian Muslims must face today? The book attempts to answer these questions by analyzing the discourse of select examples among the Muslim elites representing by these trends.

Muslim women actively attend Canadian public spaces through the establishment of women’s associations and institutions. These reflect, to a large extent, the challenges facing Muslim women in building a Canadian identity, helping them overcome local hurdles and facilitating integration and harmonious citizenship. On the other hand, religious signs or symbols, including the hijab, impose still-unresolved debates in Canadian society, which are clearly manifested in several areas. These include the courts, which sometimes confront challenges posed by religious beliefs, and usually uphold the respect for minority particularism enshrined in the Citizenship Act. This reflects to  considerable extent the ability of the Canadian model to devise constitutional settlements to complex problems. The book ascribes considerable importance to the influence of Islam in the Canadian courts, the legal regulation of halal food, and the state’s neutrality in coping with it.

In conclusion, the Al Mesbar Center is grateful to all the researchers involved in the book. Especially Professor Sami Aoun who oversaw the editing, and our colleague Rita Faraj, who coordinated the various essays. We hope that you will be satisfied with their efforts and those of the team.