References of a Terrorist Mentality: Resources and Ideas 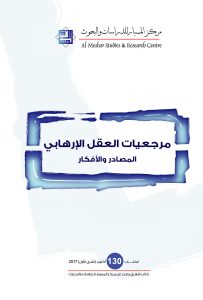 Islamist movements draw on a range of historical and contemporary source materials to fuel their ideologies. In 2013, one study of social media activity by ISIS fighters found that several renowned figures in Islamic history in particular had an outsize impact on the group’s radical ideology. Most were notorious for advocating the use of violence to introduce revolutionary change in Arab and Muslim societies.

Al Mesbar’s 130th monthly book — “References of a Terrorist Mentality: Resources and Ideas” — explores the theoretical references adopted by various jihadist terror groups in order to legitimize the violence they perpetrate. Aiming to better understand “Islamist violence,” the book traces the evolution of the ideologies, and highlights symbols and theological frameworks that underpin Salafi jihadist discourse in particular

The book opens with an examination of the legacy of Ibn Taymiya (1263-1328), whose rhetoric has been selectively adopted by Islamist groups — removed from its historical context of Mongol expansionism and Tatar hegemony over Islamic culture. Ibn Taymiya’s jurisprudence has provided a basis for the ideology of “takfirism,” and justified the self-isolation of Islamist groups from the society around them.

A modern corpus of source materials speaks more directly to the present-day political and social climate of Muslim-majority states. Sayyid Qutub (1906-1966) and Abu Al’ala Al Mawdudi (1903 – 1979) argued that national sovereignty should amount to “no ruler but Allah.” They called for all Muslims to be judged by the basic principles of Sharia as interpreted by Islamists and their political discourse.

It was Muslim Brotherhood founder Hassan Al Banna (1906-1949) who sprouted the ideas that were later nurtured by Qutub and Mawdudi. Their legacy would later be used by terrorists to justify and legitimize atrocities against states and societies that did not conform. They contributed a value system that rejects modern states, democracy, elections, and political pluralism.

A separate study in the book shows that Al-Qaeda sought to be the legitimate heir of Qutubism, aiming to put its theory into practice. One can easily trace the impact of Qutub’s literature on Abdallah Azzam, Usama bin Laden, Aymen Al Zawahiri, and Abu Mohammed Al Adnani.

Political Shi’a Islam should be considered among the pantheon of contemporary jihadist movements as well. The rhetoric of Ayatollah Ruhollah Khomeini (1902-1989) arrives at the virtue of violence for the sake of revolutions and to effect coups. At the core of Khomeini’s ideology lies a vision of religio-political authoritarianism. It is worth noting that the Iranian revolutionary regime has translated and promulgated all of Sayyid Qutub’s writings — at that, translated into Farsi by no less than the present-day Supreme Leader Ali Khamenei himself.

The book also explores a further symbol of Salafi Jihadism — Abu Qutada Al-Filistini — who believed that democracy is irreconcilable with Shari’a because the former is built on secular principles.

Al Mesbar Center would like to thank all experts and writers who contributed to this book — particularly Muntasar Hamada, who coordinated the chapters.