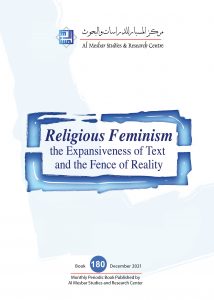 Over the years, the Al-Mesbar Center has shown a persistent commitment to highlighting the role, both imagined and real, that women play in Islamist movements, long an under-studied phenomenon. In November 2010, it published Islamic Feminism: Jihad for Justice. Three years later, it published Women and the Challenges of Political Islam. In January 2015, it published Women of the Gulf and Yemen: The Controversy of Rights, Religion and Islamism. In November 2018, it published the book Women and Religious Knowledge, and in the same month of 2020, it released Feminist Debates in the Abrahamic Religions: History and Approaches. In their totality, these works and others shed light on the important but under-acknowledged role played by women in Arab political life.

In its 180th book, released in December 2021 and titled Religious Feminism: the Expansiveness of Text and the Fence of Reality, the Al-Mesbar Center adds to this body of work. “Religious Feminism” highlights the search for the root of equality within a plethora of religious traditions, covering both the corpus of texts and daily practice. It examines not only the presentation of women in the holy books of several religions, but also the experience of women leadership models in both ancient and contemporary history.

The paths of human experience in the Abrahamic religions and their books are similar in that each encompass a wide array of variation due to the different contexts of the texts and the societies and areas of life to which they were applied. This very range of examples makes it useful to focus on positive models that can be built upon, to answer what traditions can offer in terms of laying a groundwork for women’s equality and to helping them to break free of the constraints imposed by regressive elements.

The book lays out a number of recent interpretations about the presence of women in the three monotheistic religions, based on historical approaches and close textual analysis. Its component essays seek both to elaborate on the influence of women throughout their respective religious traditions while also adumbrating the path of numerous reformers who sought to carve out greater space for feminist autonomy.

The first axis of the book covers the presence of women in the Old Testament (Tanakh, in Hebrew). It touches on influential women in the Bible and then conducts a close reading of passages dealing with Ruth, Esther, and Judith. These three books, named after their female protagonists, reflect a context that was intellectually open to women thriving in the face of harsh social mores. In the New Testament, a figure who comes in for comparable scrutiny is Kandake, a Queen of Ethiopia, who was present in the Acts of the Apostles.

Despite the reservations that such exegesis may raise in certain quarters, modern Christian Biblical studies succeeded in stressing women’s presence in the formative phases of the Christian faith. One such example is examined in the essay “American Evangelical Feminism,” which focuses on the issue of women’s ordination, eventually approved by the Church of England in November 1992, with the first ordinations carried out in March 1994. Despite official sanction, the priestesses — as detailed in the third study of Women’s Studies in Christianity — continued to face challenges from within an “informal society” in the Church.

The book’s essays on Islam begin with a study of the French researcher and orator, Kahina Bahloul, who sparked controversy with her outspoken proposals to “reform Islam.” She buttressed her view of women’s presence in the Qur’an with the approach of French Algerian intellectual Mohammed Arkoun and his discourse of “linguistique de l’énonciation.” She used it to interrogate the religious text without disrupting its historical conditions. Another study delves into the symbolic transformations in the story of the Queen of Sheba, from the clear text to the interpretations proposed by a medieval historian, Al-Maqrizi, and his school.

In the context of practical historical experience, one study recounts examples of influential female figures throughout Islamic history, particularly in the fields of theology and political administration, chosen from different historical eras. While the previous study celebrated the “extravagant presence,” as it describes it, its successor — authored by Tunisian researcher Najia Al-Warimi — records her objection to the careless and desultory way in which female scholars are often treated in critical literature. The study attempts to set matters aright by tracing the lives of pious women, through a manuscript dating back to the eighth century AH of Taqi al-Din al-Husni Al Demashqi, which chronicles the history of Islamic mystics.

In contemporary modern history, a study in the book sought to clarify the change that occurred in the leadership of Sufi women in society, in African experiences, focusing on four women who formed a spiritual leadership for some Muslims in Nigeria, Senegal, Algeria and Eritrea; they sponsored the position of a societal “caliphate,” in delicate political conditions, and recorded an influential leading political presence: Nana Asmaʾu (1793-1864), Dan Fodiyo (1793-1864), Sokhna Magat Diop (1917-2003), Algerian Sheikha Zainab Al Qasimi (1850-1904), and the Sharifa Alawiya Al Mirghani (1892-1940).

In an analysis of women prominent in the ambit of Russian religiosity, the study of the personality of the first female Islamic judge Mukhlisa Būbī (1869-1937) stands out. Elected on May 11, 1917, two weeks after the removal of Tsar Nikolai II, present at “the All-Russia Muslim Congress” where she was chosen to be a Qadi in the Central Spiritual Administration of the Muslims of Siberia and Russia. This constituted a landmark event in the history of the Muslims of Russia. The final essay in the series on Islamic topics deals with the presence and role of women trained in Al-Azhar in order to cater to Muslim women of all classes and categories. It focuses on the initiatives led by the Egyptian authorities in support of Al-Azhar’s current reforms.

In conclusion, Al-Mesbar Studies and Research Center would like to thank all researchers who participated in the book, especially our colleague Rita Faraj, the book’s coordinator. We hope that her efforts as well as those of the wider team efforts will find favor in your eyes.

The Editor in Chief