Islam in Sweden: The Threats of Islamism and the Challenges of Integration 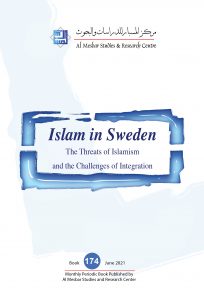 The Al-Mesbar Studies and Research Center continues to research Islam in Europe, from the Balkans to France, Belgium, Sweden and Britain. In so doing, its explores the variety of Muslim experiences, and analyzes phenomena associated with their societies. This edition, titled “Islam in Sweden: The Threats of Islamism and the Challenges of Integration” (Book 174, June 2021), examines Sweden’s approaches in handling immigrant Muslim communities, as well as their levels of integration and the obstacles associated with that process.

In that vein, this book relies on a close analysis of key indicators including, but not limited to, the influence of isolationist Islamist organizations and the state’s misreading of activist violence. Its constituent essays utilize an interdisciplinary approach embracing sociology, political science, and the study of religion. The book introduces the reader to both active and passive organizational patterns in Sweden, beginning with generic Islamist organizations, advancing to advocates of symbolic violence, and concluding with examples of hard-core violent extremism, including those involved in recruiting Swedish foreign fighters to join ISIS between 2014 and 2016.

The book begins by laying out the Sweden Democrats’ attitude to immigrants in general, and Muslims in particular. It addresses the Swedish experience in teaching Islamic religious education and curricula to Muslims, as well as assessing Imams and spiritual guides’ curricula for training and rehabilitating former extremists. The book takes particular aim at the Swedish view of violence and oppression against women, which both Sweden’s academic literature and legal codes designate as “honor crimes”.

One of the book’s most prominent essays examines the evolution of Islamist influence in Sweden. It focuses on Muslim Brotherhood, Hizb Ut-Tahrir, and the “passive radical” movements that Swedish authorities have classified as “purist and denominationalist.” One study presents an analysis of the individual cases of radicalization, seeking to understand what prompted a number of Swedes to travel abroad in a bid to join ISIS.

Although Muslims’s connection to Sweden dates several centuries, with some claiming the tie extends as far back as the seventh or ninth centuries, followed by the wave of orientalist academic ventures and older, successive waves of immigration. Nevertheless, most Swedish researchers have limited their observations to migrations following the twentieth century, rendering it difficult to detect any traces of a pre-immigration “Swedish Islam” or “traditional” European Islam. This, if it ever existed, has since been displaced by Islamism in an unforeseen development.

According to one exploratory study, Swedish academics committed certain methodological errors while examining the phenomenon of political Islam, as they were unable to identify its implicit ideological cross-currents. The author of this study attributed this failing to Swedish researchers’ reliance on postmodern research methodology, in which the concepts of modernity, secularism, democracy, and multiculturalism are viewed in a relativist manner that effectively equates the Muslim Brotherhood with socialist democratic parties in the economic sphere and with Christian social parties in the family sphere. Another explanation for this methodological imbalance, according to the researcher, is a lack of competency in Arabic among academics specializing in terrorism and Islamist groups, which made monitoring duplication of activists’ Islamists within Sweden and the world in general impossible.

Another study touches upon the experience of Hizb ut-Tahrir in Sweden. It notes the soft handling of the group’s incitement; Swedish authorities are relatively restrained in handling all groups that harbor strong anti-State and anti-institutional agendas, but refrain from resorting to physical violence to achieve their goals. Although Hizb ut-Tahrir can be classified as a “missionary of hatred,” which it actively foments, a lingering controversy over its legitimacy persists. The study well reflects the Swedish predicament as the country struggles between the theory of democracy and its application, and in delineating the forms of violence it will tolerate. It raises questions about the ability of extremist discourse to instrumentalize in practice principles it claims in theory to abhor.

The book follows the trend of Swedish terrorists joining terrorist organizations. Swedish authorities estimate that 300 Swedes joined ISIS and Nusra Front in 2017, with the Swedish Security Service identifying “distinct suburbs” for four cities: Gothenburg, Stockholm, Malmö and Örebro; as housing 80% of these recruits. Separate suburbs and locations in the Swedish context refer to areas where immigrants and asylum-seekers are brought in upon arrival, resulting in the formation of distinct and isolated ethnic neighborhoods which failed to integrate with their surrounding communities. Despite the fact that some of these terrorist recruits are economically well-off and fully Swedish by descent, the subject of their repatriation is still of considerable controversy in Sweden, where the dominant view is to reject their re-integration.

The problem of immigration has been one of the most visible challenges to the Swedish state. Following a decades-long “open door” policy, the upheaval and tensions in the Middle East since 2011 have prompted changes to Sweden’s position. One study seeks to link these alterations to the rise of the right-wing “Sweden Democrat” party, which adopted a vocabulary viewed as harsh toward immigrants and Muslim populations while emphasizing the importance of preserving Sweden’s Christian identity. Despite the fact that Sweden is one of the most secular countries in the world, the Christian heritage continues to shape its culture.

Religious education for Muslims in Swedish Islamic schools has emerged as a litmus test for Swedish authorities. According to one study focused on the issue, although the basic choice of Islamic schools does not center around religious education or Islamic religion, these schools provide an educational environment in which children can learn about Islam through textbooks based on a secular methodology, as well as through religious lessons in which religion serves as a touchstone, and children learn about the “virtuous life” from an Islamic perspective.

The book has exhaustively detailed several attempts by the Swedish authorities to train and certify imams, documenting the atmosphere in which these initiatives were developed and analyzing the reasons for their failures, which oddly enough include the authorities’ impartiality toward religion. Nonetheless, a fresh understanding of this critical subject has highlighted the State’s role in developing and funding programs for teaching Islam and certifying imams in order to regulate religious discourse by entrusting it to well-qualified individuals.

The book emphasizes the problems that women face when attending Swedish mosques, demonstrating how women activists defend their right to exercise religious leadership while maintaining conventional Islamic modes in the public realm. The book discusses the bargaining process used by women to enhance their positions in conservative contexts, with the goal of altering their everyday lives and their status within Muslim culture and Swedish society as a whole.

Another study examines at the topic of violence against Muslim women in Sweden, particularly in Arab and Kurdish communities, which often culminates in their murder under the guise of “honor.” The essay highlights some notable cases that were referred to court as well as the intrinsic vulnerability of mixed marriages.

In conclusion, Al-Mesbar Studies & Research Center thanks the project’s researchers, in particular, Rita Faraj, who coordinated this edition, and the project’s team.