The Muslim Brotherhood After the Downfall: Restructuring and Exploiting Alliances 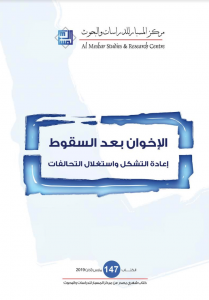 The June 30 Revolution succeeded in dispelling the shadow cast by the Muslim Brotherhood over Egypt. The Egyptian military, with wide popular backing, moved to proscribe the group and its organizational assets. Subsequently, the state prosecuted the group’s senior leadership, charging them with complicity in inciting violence and terrorism.

Six years later, a host of questions arises. What is the current state of the Brotherhood? What lasting repercussions have its actions had on the organization and its structure? What is the state of play between the so-called “radical” and “moderate” elements within the organization, and how does that split affect the group’s organizational and political options? Who within it is advocating for continuing a policy of confrontation with the government as opposed to ostensible reconciliation? How much of an intellectual evolution has taken place within the ranks of the Brotherhood’s younger generation? What is the status of other Islamist elements within Egypt, such as the Islamic State and other extremist movements? Do they represent auxiliaries of the Brotherhood, or are they embarked on a fundamentally different venture?

The Al-Mesbar Studies and Research Center seeks to answer these and other questions in its 147th book, The Muslim Brotherhood After the Downfall: Restructuring and Exploiting Alliances, released in March 2019. It analyzes the most prominent transformations and conflicts experienced by the Muslim Brotherhood and the Islamic State, as well as other extremist currents in Egypt throughout 2017-2018.

A number of research specialists contributed to this volume. Their studies reinforce internal testimonies presented by former Islamists who have disclosed the hidden realities of life within the Brotherhood, particularly their attitudes toward the state, society, and violence. One of the studies examines the internal and external ideological conflicts among Brotherhood factions, which have broken into the open as a consequence of the group’s decline in the wake of the June 30 Revolution. The study also examines the measures taken by Egyptians in order to safeguard both their institutions and the state from the dangers posed by the Brotherhood’s efforts to erode Egyptian identity.

Broadly speaking, the ideological divisions within the Brotherhood can be categorized along the following lines: the radical “polarizers,” who reject any ideological reconsideration, opting instead for confrontation and violence; the “coverts,” who prefer withdrawal, concealment, and clandestine work; and the “revisionists”, those stemming mostly from the younger generation who seek to steer the organization away from its historical course. However, experience indicates that these categories are mere options, which the Brotherhood voluntarily alternates between, depending on the needs of the hour; their real guiding light is Brotherhood’s General Guide.

The Muslim Brotherhood After the Downfall: Restructuring and Exploiting Alliances, explores the role of the leaders of the Muslim Brotherhood in establishing terrorist organizations that are currently engaged in violent campaigns within Egypt. These include ISIS-aligned groups, who follow the line of Supreme Guide Mustafa Mashhour. Events covered in this vein include the formation of a military apparatus and the emergence of Ansar Bayt al-Maqdis, which evolved into Rayat al-Uqab as well as other terrorist entities, some of which eventually took refuge under the umbrella of Wilayat Sina, an ISIS affiliate in the Sinai peninsula. Despite these wide-reaching affiliations, these violent offshoots have managed to maintain a Brotherhood-style structure and overall alignment with the organization’s agenda.

In addition, the book attempts to examine the structural barriers to the Brotherhood undertaking serious ideological revision. It concludes that the fundamental impediment is the totalitarian impulse deeply embedded within the Brotherhood’s senior membership. Despite their pragmatic approach, they have been unable to recalibrate and reconcile with Egyptian state and society on a new basis,  perhaps an emulation of conservative religious parties in the West. After all, the Brotherhood was shaped by different experiences and a different history, as well as ideological lodestars, developments, and frameworks governing the relationship of organizations with the state, society, economy, and religion.

Finally, The Muslim Brotherhood After the Downfall: Restructuring and Exploiting Alliances sketches the most important future scenarios which those sympathetic to the Muslim Brotherhood are seeking to furnish Egyptian Islamists. It contends that the Brotherhood has only one plausible path forward: to abandon its antagonistic relationship with traditional Islam, enter into a compact of citizenship faithful to the state and its institutions, and abandon attempts to hijack society and religion.

The Al-Mesbar Studies and Research Center would like to thank all the participating researchers, in particular our colleague Maher Farghali, who coordinated its contents.