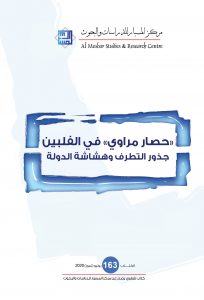 The Al-Mesbar Center for Studies and Research, in its 163rd monthly book — The Siege of Marawi in the Philippines: The Roots of Extremism and State Fragility (July 2020) — examines the history and current condition of ethnic and religious groups in the Philippines. It traces their relationship with the state, the formation of that relationship, key institutions, and historical drivers that accumulated during the colonial period. The book also discusses military coups, their implications for political parties, and the resulting mutual tension which has shaped Philippine society, religion, and politics. The book examines local Islamist movements and their distinctive characteristics, as well as their ties to Islamist parties of the Middle East. Lastly, it reviews strategies adopted by successive Philippine governments to combat terrorism.

There are over 110 distinct ethnic groups within Philippine society, speaking more than 170 languages, in addition to four languages which are now no longer spoken by any group as a mother tongue.

Islam reached the southern islands in the Philippines during the 13th century. Christianity entered in the 16th century.  The Muslim community concentrated in the southern parts of the Philippine archipelago and formed part of the ethnic and national identity.  As in Malaysia and Indonesia, it has evolved into a syncretic blend, combining indigenous religious and cultural practices. The conflict between Church and State in the Philippines is one of the defining characteristics of the country’s history. Despite this, Christianity in the Philippines appears to have achieved a state of greater degree of entrenchment in the country’s political and social landscape.

The book devotes particular attention to Christianity and its history as the dominant religious tradition in the Philippines.  It touches upon the complex relationship between Catholicism and local religious traditions as well as the Church’s relationship with both the state and the military, and its impact on the Philippine’s democratic transition. One study concludes that “the transformation of the Church from an institution that can compete with the state in society and education, into a weak competitor that lacks a broad grassroots base, and whose potential is diminished, can be explained by the tumultuous history between them. Both parties claim to be engaged in the public interest of the nation, but their priorities and assumptions have always clashed, and yet there have been times when they have abandoned their differences in the face of a threat to their status.  This cooperation has not erased, but rather mitigates, the tensions that exist between them. Once the threat is removed, the differences return to the forefront of the scene again.”

The expansive idea of the State in the Philippines and the great historical freedom of maneuver available to traditional Christianity gave rise to a substantial role for the Church in the political realm. However, over time it lost its influence as the public entered into a protracted decline in the level of religiosity. Meanwhile, a competitor arose in the form of “liberation theology,” which formed a sort of alternative religious tradition, one intimately linked to modern notions of human and national rights. In contrast, Islam is the second largest official religion in the country, and has a dominant presence among 10 ethno-linguistic groups. It has established its own traditional and educational institutions, and evolved a multi-layered syncretism in dialogue with the rich surroundings of the archipelago.  According to one study, “[a]t the heart of these layers, there is a solid nucleus that is a continuous conventional system that adapts to external variables.” The indigenous people have effected an “indigenous localization” of Islam, which is consistent with a range of modern cultural beliefs and practices, some of which would seem to be at odds with traditional notions of “haram” [forbidden] in Islamic law, such as consuming alcohol, or carrying a Christian name.

Traditional Islam, idiosyncratic and dormant, is threatened by the dangers of “separatist” or “radical” Islam and its activist organizations. Several were funded by Libyan leader Muammar Gaddafi in the 1980s, while others were fueled by the ideology of the Muslim Brotherhood in the subsequent period. More recently, that role has been occupied by waves of “globalized terrorism.” Terrorists in Middle Eastern countries, especially following the emergence of Islamic State in Iraq and Syria (also known as Daesh) and the rise and fall of its so-called “caliphate,” have provided a significant impetus to their counterparts in the Philippines, namely the Abu Sayyaf group and those in its territory. These groups united during the siege of Marawi, bypassing their ideological and ethnic differences.

One study of the book proceeds from an analysis that “Daesh, after its losses in Iraq and Syria, has entered into a phase of global expansion, and since Asia includes 63 percent of Muslims in the world, the organization is conducting an intensive search for allies by deepening its influence in South-East Asia. Indeed, it has already annexed the entire Abu Sayyaf group and built a deadly affiliate in the Philippines.” Given that Abu Sayyaf is one of the few terrorist groups with naval capabilities, its acquisition by Daesh may seriously threaten maritime trade, and Daesh in East Asia will have the potential to conduct ground operations in the southern Philippines and eastern Malaysia, as well as strike targets at sea. The creation of a Daesh core in the Philippines is not only a domestic threat, but also a regional and international threat.

The book also addresses some of the most prominent terrorist organizations and their leaders in the Philippines — by way of six studies on terrorism, its dangers, and ways to combat it, focused on the “Siege of Marawi” from 23 May to 23 October 2017. Just as Daesh besieged Mosul and Raqqa, the same group also decided to besiege the entire Muslim city of Marawi. The battle between security forces and terrorists was an important milestone in counter-terrorism efforts, and revealed strong links between local Filipino militants and Daesh. It marked the culmination of a pro-Daesh alliance that brought fighters together from three of Mindanao’s largest ethnic groups: the Tausug, the Marano, and the Maguindanao.

Studies on the phenomenon of terrorism have revealed the extent of the extremism issue facing numerous countries, particularly following the break-up of the Daesh project in Syria and Iraq and its potential for retrenchment in Southeast Asian countries. However, the “problem of terrorism” is not only related to extremism and the ideology that advocates it. There are other political, social, and historical factors which must be taken into account in order to come to a fuller understanding of violence’s roots — which most often coincide with the weakness of state institutions and the unevenness of their role in crisis management and resolution.

The book provides an initial understanding of the Philippines, not only in the complexities and intersection of terrorism and counterterrorism studies, but also in understanding the structural — and sometimes functional — relationship between majority groups and the state, as they undergo various stages of unrest and peace. In addition, it is useful to take into account the political history of the country before and after the Ferdinand Marcos era (1965-1986) and the accompanying “popular revolutionary legacy” in order to develop a deeper perspective.

The Al-Mesbar Center for Studies and Research thanks all the researchers who participated in the composition of this book, especially our colleague Rita Faraj, who coordinated its production.