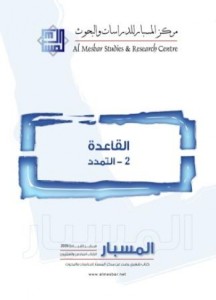 In its 26th monthly book, Al-Mesbar Studies and Research Center looks at the indications and the evidence of expansion of Al-Qaeda. Marwan Shahadeh writes about Al-Zarqawi and Al-Qaeda’s strategy in Iraq. He starts with the initial hypothesis that bad planning for the post-Iraq war in 2003 was a major failure and a strategic mistake that led to the aggravation of problems in Iraq and created the right climate for the emergence of Al-Zarqawi, who was known in the past to Al-Qaeda in Mesopotamia. Dr. Idris Krinithen writes about “Al-Qaeda in the Maghreb: Rise and Crisis”—tracing the path and the evolution of Al-Qaeda in the Maghreb since January 2007, when it declared that “the Salafi Groups for Preaching and Combat (GSPC) in Algeria” were to change their name to “Al-Qaeda in the Islamic Maghreb.” Dr. Samir Ghattas then addresses Al-Qaeda in Palestine and Israel—and how Israel benefited from Al-Qaeda’s existence and rhetorical threats without experiencing any real threats. Dr. Ahmed Gharbaoui monitors the progress in the war on terrorism after seven years since the events of September 11, 2001. The monthly book is Savagery Management by Abu Bakr Naji, and is reviewed by Ala Hamdi. The study in this issue, from the “Fundamentalist Mind” series, examines Crisis of the Fundamentalist Mind: Rejection of Pluralism Model by Dr. Mohamed Helmi Abdul Wahab.