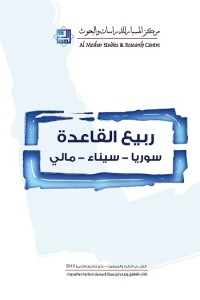 Al-Mesbar Studies and Research Center’s 73rd monthly book examines the influence of the Arab Spring on Al-Qaeda. First, this volume sheds light on the Syrian scene, where jihadi Salafi streams probably linked to Al-Qaeda are active; then it examines the situation in Mali, the coastline of which was turned to blood and gunpowder; and finally, it includes an assessment of the status of Al-Qaeda in Sinai. Ultimately, the issue asks: Is it now Al-Qaeda Spring? Several studies try to answer this question. Muntasir Hamada argues that Al-Qaeda was not given a specific strategy since the outbreak of the Arab Spring. Belal Altalidi tackles the counterterrorism policies adopted by the Muslim Brotherhood in Egypt and Tunisia. Murad Batal Shishani wonders whether Syria could be a new Afghanistan and tracks the Syrian opposition factions—along with their targets. Idris Krini addresses the issue of Al-Qaeda and Libyan weaponry after the revolution. Krini points out that extremism and terrorism grow in warzones and conflict areas as well as in areas lacking stability and central authority. Abdel Aziz Abdul Qader studies transformations, paths, and scenarios after the January 25 revolution. He believes that Egypt is facing complicated challenges as it deals with its latest problem: a tunnel linking Sinai and Gaza. Finally, Mohamed Alawawdeh focuses on the Al-Qaeda presence in Sinai and its future there in the light of new developments. The issue’s monthly book is The Desert’s Blood: Al-Qaeda Wars on the African Coastline by Mohamed Baghdad, rreviewed by Mohamed Alawawdeh.