Arab Women After the Arab Spring 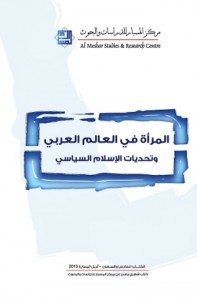 This collection of studies explores the status of women in the Middle East and North Africa since the “Arab Spring.”  What role did they play in the revolutions of 2011 and 2012? What progress have they made toward achieving their rights?  Was it indeed an Arab spring for women?  The Al-Mesbar Center placed these questions in the capable hands of 11 scholars and writers, mostly Arab women themselves.  Several of them are not well known in the West but merit greater attention; they already enjoy a following across the Arab world.

The book opens with a paper by Lebanese professor Rita Faraj, author of the landmark study Violence in Contemporary Islam (Arab Cultural Center, 2010).  She highlights the widespread participation of women in the revolutions, both alongside Arab men and on their own.  Examining the case of Yemen, Faraj shows that women were suppressed no less than men by the regimes they sought to oust — yet the sweeping changes that followed were not the “spring” for which they had hoped.  To the contrary, Faraj documents a decline in women’s political participation in much of the region, particularly in countries where women’s status had advanced considerably before 2011, like Tunisia and Egypt.

In the second chapter, Tunisian scholar Raja Bin Salama sharply critiques the rhetoric on women’s issues from the ruling Ennahda Islamist party.  She identifies contradictions in the movement’s positions and public statements, and judges the discourse to be, on the whole, duplicitous.  On the one hand, she notes, Ennahda leader Rached Al-Ghannouchi praised the ousted regime’s “Personal Status Code,” which had advanced women’s rights in the country, as a logical extension of Islamic jurisprudence.  On the other hand, Ghannouchi also said the same code was corrupt — and a departure from Islamic law.  Bin Salama finds vagary and inconsistency in statements by many of the movement’s senior leaders.  Prior speeches by Ghannouchi himself, she adds, betray his contempt for the opposite sex: He has described them, for example, as “one of the devil’s snares.”  Some of his colleagues, for their part, have said that they oppose women’s participation in politics altogether.  Though the movement’s rhetoric has changed somewhat over time, Bin Salama concludes, the shift reflects not a fundamental change in attitude but rather a pragmatic adjustment for expediency’s sake.

Amal Qarami, a professor at the University of Manouba in northeastern Tunisia, approaches the situation in her country from a different angle.  She views hostility toward Tunisian women as a phenomenon that had always been there but was long repressed; the revolution, she says, provided the opportunity for it finally to rear its head.  Qarami sees the growing demands for female genital cutting and marriage for underage girls as manifestations of pure hatred.  She shows how the newly empowered Salafi men who lead these calls, in constantly harassing the opposite sex, have subjected Tunisian women to forms of repression that were unknown in the country before the revolution.  She cites examples of prominent Tunisian women who face new forms of discrimination in their daily work and unprecedented hostility for advocating freedom and equality.  Meanwhile, Qarami notes, some female Islamist voices are compounding the problem: They oppose egalitarian principles too, and call for reintroducing patriarchal traditions to Tunisia such as polygamy.

The fourth study was conducted by Egyptian scholar Hind Mustafa, now a researcher at the Arab Women’s Organization of the Arab League.  It concerns a concept called “Islamic feminism.”  While some political activists in the region use Islamic texts to justify the relegation of women to second-class status, a different intellectual stream finds support for women’s advancement in Islamic tradition — beginning with the teachings of the Qur’an itself.  This progressive reading of Islam has been advanced in a body of work by Western as well as Arab scholars, and Mustafa provides examples of remarkable women in Egypt, dating back 150 years, who have sought to build on such ideas.  Women whom she profiles, from the nineteenth century writer A’isha Hanim al-Taymuriya to present-day activist Hiba Ra’ouf Izzat, are not well known outside Egypt, but Mustafa shows why more people should learn about them.  She also notes that the cause of women’s rights was only one of several which these women championed; others included Egyptian nationalism and, in the case of the Arab spring, opposition to the Mubarak regime.  The author adds that “Islamic feminism” has always been a controversial idea — both in Arab countries, where many Islamists have attacked it; and in the West, where secularists tend to hold it at arm’s length too.

Poet, novelist, and independent scholar Nabila al-Zubayr, in the fifth study, brings the focus back to her native Yemen.  She argues that Yemeni women were prominent and pivotal in the country’s recent revolutionary protests — and that political activism by women had been developing in the country for years.  Zubayr shows that the ups and downs of women’s status in modern Yemeni history were largely a function of how much power conservative forces wielded over the regime: Gradual advances since the 1960s started to reverse after the landmark parliamentary elections of 1993, when opponents of women’s enfranchisement gained substantial ground.  Zubayr’s findings draw a stark contrast between Yemen on the one hand and Tunisia and Egypt on the other: In the latter two countries, women worried that a revolution would threaten the rights they had won under the prior regimes.  By contrast, in Yemen, where women had seen their status deteriorate in the years leading up to 2011, they hoped that revolutionary change would help.  During the mass demonstrations of 2011, Yemeni women sometimes fell under attack — not only by the regime, but also by male protestors who felt they did not belong there.  But they persevered, going so far as to field a female candidate for president of the country.  Zubayr believes that any gains women may have registered over ten months of protest were curbed as a result of the “GCC Initiative,” which brokered a political settlement in Yemen that, according to the author, slowed the pace of social change.

Does the situation of Syrian women differ from that of other Arab countries?  The question is considered in the sixth study.  Its author, Sirin Khuri, is a Syrian rights activist who was jailed by the Assad regime in 2011 for protesting on behalf of the country’s political prisoners.  Khuri finds that Syrian attitudes toward women are not particularly different from that of their neighbors; long-held customs and traditions still relegate women to second-class status.  She cites the country’s discriminatory attitudes toward female divorcees, as well as widespread support for marriage between men and underage girls, and opines that overall, women are the victims of “terrorism” by their society.    The paper conveys a pessimistic outlook toward women’s future status in Syria: Khuri doubts that their participation in the ongoing revolution will earn them greater rights after the dust settles — even though they now suffer no less than men.

Libyan women are the focus of the next chapter, by Amal al-Ubaydi, a political science professor at the University of Benghazi.  She paints a picture of her country that parallels the situation elsewhere in the Arab world: Many Libyan women played leading roles in the struggle against Qadhafi, but went on to face a campaign of marginalization and exclusion amid the changes that followed.  As in the prior examinations of Yemen and Syria, Ubaydi stresses that conservative social forces, weighing in heavily on the political transitions now underway, are diminishing women’s status in public life and taking away her rights at home.

Fatima Azarwil, a professor at Hasan II University in Casablanca, contributes the ninth study, on women in Morocco.  Though the North African kingdom weathered the revolutionary storms of 2011-12, it too faced large youth demonstrations, especially during the first year.  But Azarwil finds that since that time, the Moroccan public discussion on women’s advancement has been fundamentally lacking in substance.  At the same time, she notes that women’s activism beginning in the 1940s has borne fruit, however gradually.  She shows that for decades, the Moroccan family code discriminated against women — and when the kingdom introduced progressive reforms to the code in recent years, newly empowered Islamists attempted to torpedo them.  But Islamists were overruled by King Muhammad VI — and now a revised Moroccan family code grants women greater social and economic rights.  Much lies ahead for Moroccan women, notably the challenge of strengthening their presence in public affairs.  Yet Azarwil stresses that women enjoy greater rights and opportunities in Morocco, both before and after the “Arab Spring,” than in many other nearby states.

Lebanese researcher Lama Duhayni presents a series of profiles of women who emerged as leaders in the 2011-12 protests across the region.  From Washington, Howard University professor Mervat Hatem provides a narrative overview of the different types of roles women played in the Arab revolutions.  And finally, to conclude this volume, Lebanese American University professor and translator George Katura provides a reading from a book by German author Gabi Kratochwil, The New Arab Women [“Die Neuen Arabischen Frauen”] (Orell Fuessli Verlag, 2012), which paints a hopeful portrait of recent successes enjoyed by women in various realms of Arab society.