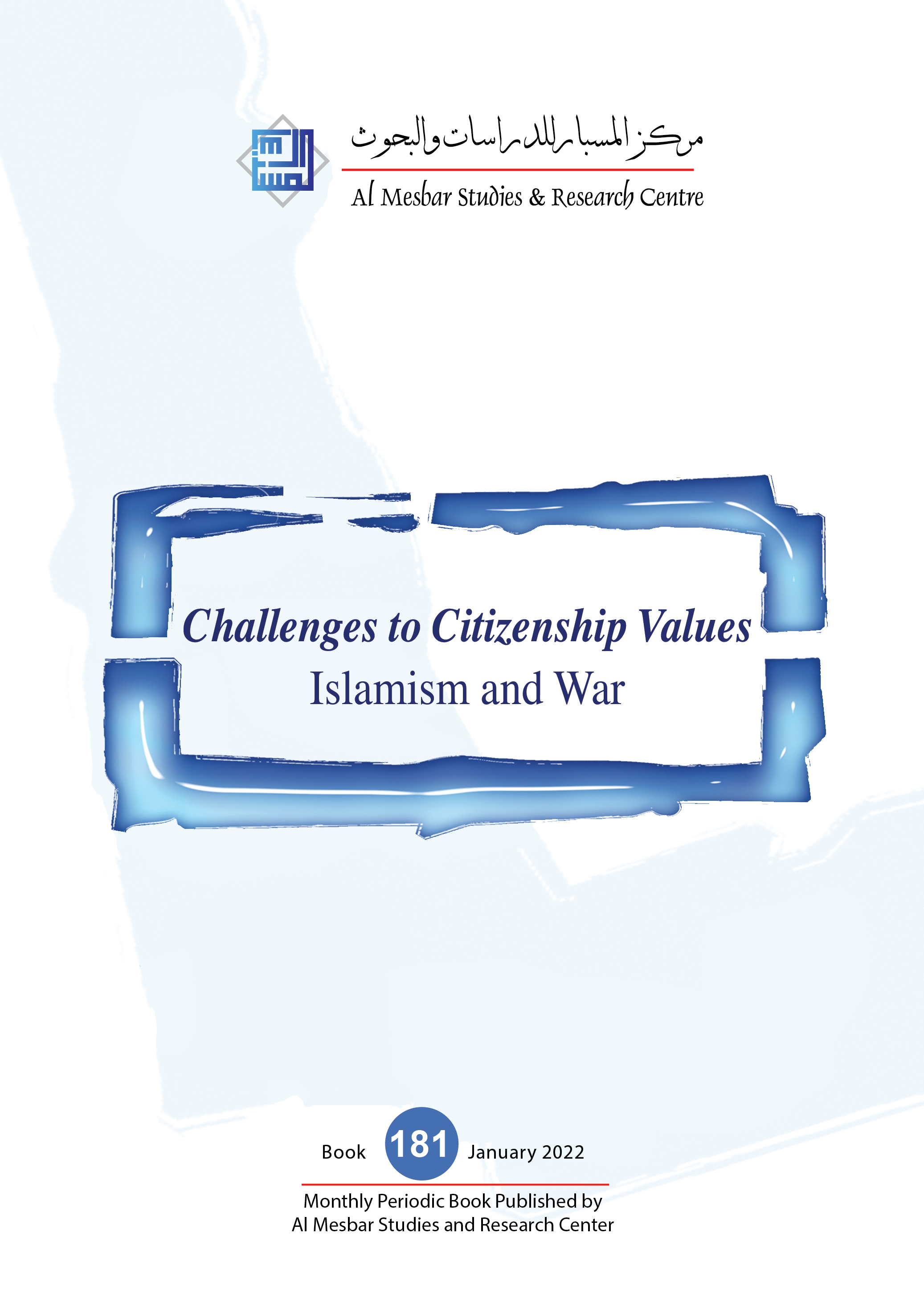 In its 181st book, released in January 2022 and titled Challenges to Citizenship Values: Islamism and War, Al-Mesbar Center explores the values of citizenship as well as the challenges and opportunities that system of values is facing. Challenges include the philosophical notions of tolerance, solidarity, respect, recognition, adherence to the law, and patriotism. The book deals with various forms of citizenship, and the values ​​associated with each. These have in large part been developed by philosophers and political theorists who were themselves responding to civil conflicts, transferrable loyalties, and the challenges posed by coexistence within their domestic contexts.

The book’s initial studies deal with three theses of German philosophers — Jürgen Habermas, Axel Honneth, and Hans Jonas — with a special focus on how the values of citizenship factor ​​into their theories. For instance, the concept of “recognition” in Honneth’s thought attains the utmost importance in the formation of self-identity since, in its absence, the individual loses his unique persona and individual status. Similarly, the values ​​of dialogue, communication, respect for law, and the public sphere occupy considerable space in Habermas’ writings, leading some to regard him as the theorist of global citizenship. His philosophy accords great weight to the ethics of debate or dialogue based on communication, liberality, and understanding.

For his part, Jonas’s writings  attach great importance to ecological philosophy, as he seeks to establish a new relationship between man and the environment. His studies do not dwell on the political and cultural contexts in which these theories originated, nor to the crises experienced by Germany in the last century and their relevance to the questions at hand. And yet their influence is palpable and deep. It has been observed that philosophies are often forged in response to moments of rupture and crisis, be it the product of war, or the politics of memory, or a grave sense of future responsibility. And for all that these schools of thought differ, they are unanimous in their promotion of the values ​​of coexistence and tolerance.

The values ​​of citizenship emerge from a particular challenge. Citizenship as such is associated with the state of political and legal sensitivity to the importance of “communal peace.” Therefore, the second section of the book deals with the rise of awareness of citizenship in three models:

The first is the Rwandan model, in which the shock of genocide and war remade society. One study examines the suffering involved and the lessons learned, as Rwandans labored in order to rebuild their social structure, induce domestic reconciliation, and find ways to achieve justice and a more stable future.

The second model described is that of the Swiss. It came about, at least in part, due to the participation of Swiss mercenaries in foreign wars. The long series of internal and external conflicts concluded in 1515 with the Swiss Confederacy’s defeat in the battle of Mariniano. In the aftermath, a new social contract emerged which sought to enable the cantons to live together with no further need for a steady stream of Swiss military casualties. The conviction that began to crystallize among the Swiss regarding the necessity of forming a “system of citizenship, one that would solidify the borders of the country and provide for non-participation in the wars of others.” As a well known result, Switzerland has held to neutrality since 1674 as the defining feature of its foreign policy.

The third model is that of Lebanon, and it is still a work in progress. Created through remarkable efforts by civil society figures in the theoretical aspect, it continues to face challenges and obstacles, chiefly originating from Islamist political forces, the intensity of transnational religious loyalties, and the dilemma posed by the Lebanese Hezbollah. This has caused an internal rupture, where some have responded that the compact of citizenship has been irreparably fragmented due to overwhelming frustration.

Political Islam has proven to be an obstacle to the “citizenship value system,” and not only in Lebanon. Its core tenets have been entangled with calls for the voiding of loyalty to the state and the reconstruction of society as well. This particular topic had been addressed in a study that scrutinizes the parlous state of  “citizenship” in the Muslim Brotherhood chapters of Egypt and Iraq.

The primary root of this antagonism toward traditional citizenship derives from Sayyid Qutb’s reformulated concepts of takfir and tanfir, as well as notions of hakimiyyah and jahiliyyah. Tunisian thinker and academic Muhammad al-Haddad — who also serves as a member of the Editorial Committee for the al-Mesbar Center — has emphasized the problematic tendencies of political Islam and its role in shaping what might be termed a “Stagnant State,” wherein a society cannot come to a complete understanding of its own dimensions. Our researchers invite the reader to examine for themselves various permutations of this experience, including the Indonesian case. There is much to be learned in such countries, still crystallizing and relying heavily on the principles of a civil state based on religious and ethnic neutrality. They also evaluate the impact of historical experience on contemporary clergy.

Another study focuses on the current Indonesian situation through the person of the new Secretary-General of the Renaissance Association of Scholars. He presents a complex framework for regarding various issues, indicating that the consequential debate is far from concluded. Nevertheless, the values ​​of citizenship remain intact.

Another study explores the role of media and its responsibility in promoting the discourse of citizenship. A healthy discourse can safeguard a common sense of social responsibility, equality between the genders, the freedom to disagree, and the common rejection of both hate speech and discrimination on the basis of gender, race and religion. It reflects the experiences of other countries regarding media self-regulation and the promotion of citizenship awareness, while seeking to understand the impact of an ever evolving media landscape.

One study presents the experiences of Belgium, France, Germany, Italy, Portugal, and Spain in transforming immigrants into citizens who are integrated into the new value system. This involved interrogating the elements that are most integral to shaping an immigrant’s status of citizenship. The study also examines the different ways for motivating this new citizen to become a natural and integral part of his host country. Also included is an excerpt of the book Democratic Citizenship in Flux, published in 2021, offering a detailed, multidisciplinary approach to certain theories about citizenship which draws from the fields of sociology, politics, law, and history.

The book reveals that extremist movements and Islamist groups are seeking to employ and exploit the fruits of the “values of citizenship” for their own political purposes. Such groups and movements tend to disassociate the values of citizenship from their contexts, instead employing these values to diametrically opposing ends. Such movements also tend to neglect the principal humanist aspects of such value-systems: equality, tolerance, and the centrality of dialogue.

In conclusion, Al-Mesbar Studies and Research Center extends its thanks to all the working team and researchers who participated in the book. In particular,  we thank Rita Faraj, who proposed, supervised, and coordinated the book’s publication, and Saudi intellectual and thinker Fahad Suleiman Shoqiran, who supported the project.