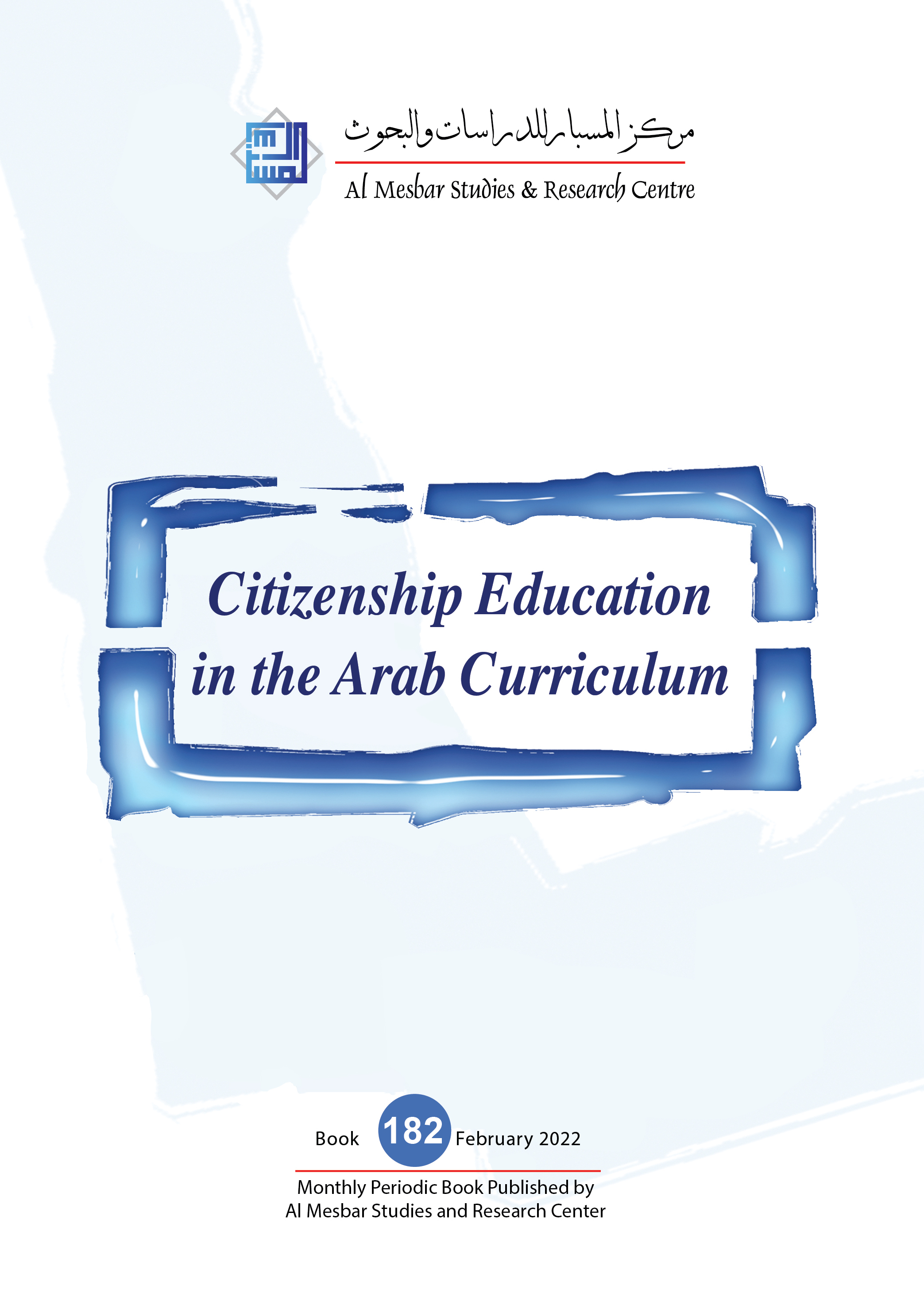 In its 182nd book, released in February 2022 and titled Citizenship Education in the Arab Curriculum, Al-Mesbar Studies and Research Center devotes much-needed attention to the issue of reformist educational paths. Whereas the prior monthly book focused on the philosophical underpinnings of different notions of citizenship, this work explores how such philosophies of citizenship are actualized in existing educational curricula throughout the Arab world, with a particular focus on Algeria, Iraq, Jordan, Lebanon, the United Arab Emirates, and Tunisia. It also includes an exploration of the “citizenship training programs” in selected research centers.

The book opens with the Algerian experience in citizenship education. The educational system in Algeria has been intentionally directed towards the formation of “positive citizens” aware of both rights from, and obligations towards, his country. This is in large measure the product of a decade of bloodshed marked by frenetic levels of violence, as well as the rise of Islamic extremism and a potent threat to the country’s social fabric. Algerian educational specialists believed that socialization takes place through education. Therefore, education on citizenship received substantial attention when modern educational curricula were being developed, since Order No 76-35 of April 16, 1976, which mandated that educational principles be adopted to provide for instruction of ideological notions of justice and equality, among the citizens and the peoples, as well as preparing them to oppose various forms of discrimination. Later, Algerian education curricula expanded to include the core concepts of citizenship education, designed to provide students with a set of knowledge, values, ​​and skills which would facilitate the rehabilitation of the country’s battered social fabric.

Other studies examine the Iraqi model, in particular a study prepared by academics Walid Salem and Hussamalddin Ali Majed. Their analysis of the situation in Iraq plumbs the historical record for Iraqi curricula’s treatment of the values ​​of citizenship in primary, intermediate, and preparatory schools in Iraq, save for the Kurdish region, which is functionally a separate case. This study shows how Iraqi curricula focused on 11 core citizenship values: justice, equality, freedom, rights, integrity, tolerance, accountability, national loyalty, peace, preservation of public funds, and cooperation. The study, which includes statistical tables covering the school years, determined that it did produce a quantifiable set of results. Among these, a sharp decrease in the level of focus on the values ​​of citizenship as a dominant feature of the school curricula in Iraq. Indeed, some of the aforementioned values — like justice, tolerance, and accountability — are still mentioned, but only 17 times each out of 1,812 pages of primary school textbooks. In general, citizenship values score very low in terms of overall representation in Iraqi curricula, ranging between 1.06% and 8.52% out of a total of 5,459 pages of cumulative pedagogical material. The source texts covered Islamic education, Arabic language instruction, social studies textbooks, and others. The study concludes that Iraqi curricula have incurred a severe deficiency in addressing the values ​​of “citizenship.”

Other studies focus on the Jordanian experience. One study, focusing on the legal framework of education, deals with the National Center for Curricula on Citizenship. This was translated into the general framework of the educational curricula under the title “Common Issues and Cross-Scholarly Concepts,” which identified areas related to citizenship, including: life skills, environmental issues, human rights, and character-building, as well as national and humanitarian issues. The study proposed a model that included strategies for implementing the citizenship curriculum in schools at the level of teacher’s training and enhancing these citizenship values ​​among students, providing practical activities that can be implemented with students.

The book also touches upon the experiences of “citizenship training” in Lebanon. It lingers over two noteworthy initiatives. The first is the Institute for Citizenship and Diversity Management, affiliated with the Adyan Foundation, and the second is Tammuz Center for Studies and Training on Citizenship. One study evaluates the training programs these offer for male and female trainers as well as seminars on citizenship, coexistence, and the educational projects on citizenship. They were implemented through community interaction at public conferences, educational seminars, and training courses, and the study examines their impact on the public square.

In another study, Emirati researcher and academic Fatma al-Sayegh investigates and presents preliminary features concerning the Emirati experience in instilling citizenship values through school curricula. Her work sheds important light on the values ​​of citizenship and its connection to national and cultural identity. She also explores the successful interaction between state and society, highlighting the means used to develop proper citizens according to national curricula. She also discusses the reality of citizenship in the Emirati national consciousness.

The book includes a bibliography of 54 studies published in Al-Mesbar Center’s monthly books, along with brief summaries, in the fields of religious education reform and tolerance studies. These cover the materials published between 2010 and 2019, with the aim of providing the reader and educational bodies specializing in curriculum development with an adequate historical background for addressing the challenges of promoting coexistence across the Arab world, Turkey, Iran, and Pakistan. The dilemmas facing the educational reform process are thus set in stark relief, especially when Islamist influences intrude on curriculum development in deference to partisan agendas and ideological conformism.

Another study seeks to present material from Arab and Islamic heritage to deepen the concept of tolerance. Focusing on tolerance in the spiritual oeuvre of Jalal al-Din Rumi, it lays out two objectives. First, it raises awareness on the importance of its subject matter, one of the core pillars of citizenship broadly construed. Second, it highlights the value of tolerance in Islamic culture as well as its centrality to Sufism. Lastly, it draws attention to other materials that can be extracted from our heritage and further developed in educational curricula.

In conclusion, Al-Mesbar Studies and Research Center extends its thanks to the entire working team and the researchers who participated in crafting the book. Special thanks go to Rita Faraj who proposed, supervised, and coordinated the book’s publication, as well as the fellow Saudi intellectual and thinker, Fahad Suleiman Shoqiran, who supported the project.