Contemporary Slavery as Instituted by Terrorist Groups in Iraq and Syria

Fighters of al-Qaeda linked Islamic State of Iraq and the Levant carry their weapons during a parade at the Syrian town of Tel Abyad, near the border with Turkey January 2, 2014. Picture taken January 2, 2014. REUTERS/Yaser Al-Khodor (SYRIA - Tags: POLITICS CIVIL UNREST CONFLICT) - RTX170U8 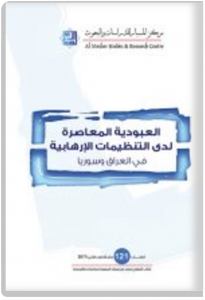 As international media coverage of the “Islamic State” has consistently shown, the organization uses Islamic jurisprudential rulings more than a thousand years old to justify the enslavement of women and children today. This human tragedy goes far beyond the realm of ISIS, moreover: It has become a mainstay of contemporary jihadist groups as they emerge and grow — and continues in several Arab and Muslim countries, though known by other names. As people of conscience consider potential techniques to eliminate this modern-day scourge, it becomes necessary to better understand slavery in all its forms — from Muslim countries to the broader world; from the role of religion to ambient socioeconomic factors; and from history to the present time. That is the purpose of Al-Mesbar’s 121st monthly book, Contemporary Slavery as Instituted by Terrorist Groups in Iraq and Syria.

Scholarly papers by Arab and Western scholars explore slavery in name as well as slavery in effect. They trace economic factors that have contributed to its survival. They consider the justifications slaveholders use, the euphemisms they employ, and cultural reasons why societies tolerate human bondage. Some cultures still believe in a hierarchy of humanity, elevating particular races and religions to superior status and subjecting “lower peoples” to sub-human treatment. Other chapters show that slavery consistently resurfaces in arenas of violent conflict: Women are captured and forced into prostitution. Men and boys are forced to serve as slave soldiers. With respect to women’s sex slavery in particular, a chapter in the book explores psychological factors that fuel fighters’ desire to exploit “women of the enemy.”

Turning to “abolitionist movements” that have emerged at various times in Arab and Muslim history, the book finds a recurring trend: Even as abolitionists introduced arguments against slavery within the framework of Islamic jurisprudence, they encountered fierce resistance — sometimes emanating not from Muslim legal scholars but rather from ancient custom and traditions external to Islam as such. The failure to counter the culture of slavery predating Islam thus ensured that it was never truly defeated.

There are grounds to look to religious leadership today as a potential barrier against slavery in the future. The book’s survey of contemporary Christian and Muslim clerics’ views of slavery shows a range of spiritual leaders denouncing the practice, and accusing its proponents of misinterpreting religious texts and principles.

Another study addresses the failure of secular law, as opposed to Islamic law, to address the scourge of slavery. The Iraqi legal system, for example, condemns slavery in several rulings, yet even amid the resurgence of slavery within its borders, still lacks a clear law criminalizing the practice.

Despite all these tragedies, the book finds a few silver linings, such as various international efforts to abolish slavery. Europe, particularly the UK, played a leading role in developing anti-slavery laws. The history of the abolitionist movement remains a ray of hope worth revisiting in times of despair.

We may never fully fathom the psychological, social, and economic factors that cause one human being to claim ownership over another. This book has one message: The endurance of slavery in today’s world is a blight on humanity, and all must work together to abolish it forever.

The Center would like to extend its appreciation to all the experts and historians who contributed to this volume, with special thanks to our colleagues, Dr. Mona Abdullatif and Ibrahim Al-Nimr, who coordinated its production.