The Islamic Jihad Movement in Palestine 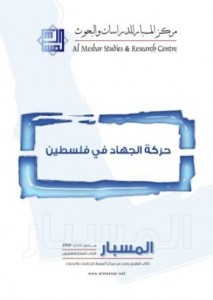 In its 27th monthly book, Al-Mesbar Studies and Research Center explores the many questions raised about the political project of the Islamic Jihad movement in Palestine, both intellectually and militarily. Adnan Abu Amer deals with the beginnings of the movement—its historical data and political context. Amer Khalil looks at the organizational structure of the Islamic Jihad movement. Dr. Zakaria Sinwar examines who started the military action and the Islamic Jihad, Dr. Ibrahim Abu-Jaber explores the phenomenon of the Palestinian Islamic movement from the Israeli perspective by analyzing intelligence and research. He also looks at the position of the Islamic Jihad movement’s counterparts in other Islamic movements, especially the Muslim Brotherhood and Hamas. Nihad Sheikh Khalil discusses the role of Islamic Jihad founder Dr. Fathi Shikaki in the build up of the movement, particularly in its early foundational stages, the most important intellectual principles that founded it, and the void left by Shikaki after his assassination. The monthly book is The Blood Journey that Defeated the Sword by Riad Amer Saif. As part of the “Fundamentalist Mind” series, Haytham Manna deals with the problem of Islam and human rights.