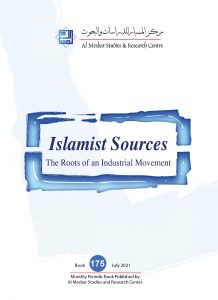 In its 175th book, released this July, 2021 and titled Islamist Sources: The Roots of an Industrial Movement, the Al-Mesbar Studies and Research Center continues to study the primary ideological sources for the survival, regeneration, and transformation of Islamist movements. Previous studies have addressed political Islam’s foundation, ideological references, organizational transformations on both the national and international levels, formations, its tactics for simultaneously isolating immigrant communities and monopolizing their political representation, as well as its general exploitation of reformist discourse of both a political and a religious nature. Building on that corpus, this book focuses on identifying the sources of terrorist ideology in particular and movement-building in general. The analysis calls attention to the importance of probing into the roots of Islamist movements’ orgnizational dynamics in order to dispell the ambiguity of the purported separation between the “outreach wing” and the “political wing”. This book offers a deep reading of both cognitive and organizational categories, and an examination of the sources upon which extremist ideology and flexible organization are founded.

Islamist movements arose in rebellion against society and its belief system, as well as out of deep resentment towards the state and religious institutions. Islamists harbored multiple grievances with these elements — society, popular religiosity, and the state — which their followers justified with a variety of rationales. Among these were the assertion that social backwardness should be addressed by a vanguard group that would reshape popular religiosity. This view sometimes took the form of, and was marketed as, the restoration of an era of religious reform; at other times, as agitation for political revolution. In either case, it is fundamentally in conflict with modern notions of state and law, with its longing to re-establish the Caliphate and enforce the Sharia. It uses any opposition to this vision to brand both society and state as infidels. In the areas of intellectual exchange, Islamist movements fashion their product in three molds. The first is based on foundations that draw inspiration from selected corners of the experience of medieval Christian reform movements. The second draws on the foundations of covert associations and fascist theories, particularly in the organizational realm. And the final form was articulated by its impulsive arguments in order to rebut both critics and orientalists, in order to derive legitimacy in its battle with popular opponents.

Each iteration is advanced at the expense of the others as circumstances require. And as for the Islamic religious source upon which these packages are notionally based, there is an open question as to the authenticity of sources on which influential Islamist thinkers rely. But the dominant trend is to insist that the foundational texts of religion be removed from their historical context, certainly as that context has been traditionally understood. The book notes the sharp enthusiasm for organization building among certain influential theorists by means of reinterpreting the Qur’an in a consanguineous manner. This tendency to reinterpret Islamic texts in ways conducive to their organizational requirements was particularly pronounced among the acolytes of Sayyid Qutb (1906-1966) and Abu Al-Ala Mawdudi (1903-1979).

The book’s opening essay analyzes the semantic sleight of hand common to the discourse of various Islamist organizations. It identifies certain basic organizational concepts and their contemporary interpretations in Islamist writings, highlighting areas of deviation from more traditional precepts, ranging from “Al-Hakimiyyah” (God’s sovereignty), to “Jahiliyyah” (an age of religious ignorance). and Jihad. Similar deviations are noteworthy in the use of terms such as Ijtihad (independent reasoning) and Tajdid (renewal). Innovations in a legal or governance sense also abound, as in the Islamist reworking of the term “Shariah”.

The study traces the concept of ​​“hijacking revelation” and Islamism’s attempt to monopolize the interpretation of Islam under the pretext of combating “backwardness”, even as it intermingles it with a distinctive understanding of Western civilization and experience. In the legal sphere, one study deals with the shift brought about by Qutb’s interpretation of the verses of Surat Al-Ma’idah that deal with God’s revelation, removing it from its judicial and literary context into one of ideological takfirism that brands whole swathes of Muslims as infidels in revolutionary language.

The book analyzes the roots of disaffected revolutionary language and tests the hypothesis that this tendency was first launched by Jamal al-Din al-Afghani (1838-1897) and his school. To study its impact, the author begins with those influenced by, and who consciously imitated, its theories. It continues with an account of his attempts to overthrow his rivals in Al-Azhar, concluding that they bear a certain similarity to the animosity of Protestant groups with the Catholic Church. Two things emerged from this experience. The first is that the founding text takes priority over other practical and theoretical Muslim experience. The second focuses on the role of religion in obliging believers to act according to its dictates, a point that enabled his students to engage in a contest of mutual one-upmanship in binding together faith and legitimacy.

Another study identifies the lines of similarity and intersection between Hassan al-Banna (1906-1949) and Al-Afghani. It chiefly examined these from two angles: the first covering the revolutionary ideas which incited the assassination of presidents  while disclaiming responsibility. The second presented select ideas that take inspiration from modern political vision, allowing them to exercise organizational movement in a democratic atmosphere. The study noted the similarity between them when it came to movement-building and organization as well as the use of a dual rhetoric when dealing with controversial issues. Searching for a point of contact between them, the study discusses the influence of Rashid Rida (1865-1935) on Jamal al-Din al-Afghani. Here the critical aspect was the latter’s adoption of the idea of ​​associations from the former, as well as the critique of non-politicized clerics, Al-Azhar, and its scholars. Al-Banna’s contact with Rashid Rida was discussed in the pages of Al-Manar, a religious magazine that he continued to publish until 1939. In his view, religion was a driver and agitator for the masses: “Such that religion did not appear to be an end in itself, but rather a means.” It noted that the study did not negate the influence of Muhammad Abdo on Al-Banna’s vision, something elaborated on in a subsequent study.

The study dealt with Muhammad Abdo (1849-1905), who still exercises influence among a broad range of the twenty-first century’s intellectual figures. The differences between his disputing students over the pioneering role in religious reform or political change, whether Islamists or advocates of a liberal renaissance, went directly to his influence on his cultural surroundings, whether in Cairo or in Paris and London, and to his contact with thinkers of different orientations such as Herbert Spencer (1820-1903), Ernest Renan (1823-1892) and Gabriel Hanotaux (1853-1944). It likewise addresses his turn towards polemics and responsa that lent his intellectual oeuvre an indignant, defensive nature.

On the one hand, Abdo believed in the necessity of returning to the era of the Prophet. On the other, this led him in wars of words with traditional clerics and popular Sufi orders, as well as official institutions. But his most lasting impact, outside of the state, was the creation of a class that thrive on critique and rationalism as well as an end to the state and scholar’s monopoly of interpreting and understanding Islamic texts.

Although one study assumed the existence of intertextuality between Thomas of Aquino (1225-1274) and Muhammad Abdo, the researcher concluded his study by saying “a warning must be issued: what befell the Catholic Church, from which Martin Luther (1483-1546) split with his Protestant reformist movement, represents a phenomenon no less dangerous to Islamic society. Influenced by Luther’s movement, Muhammad Abduh initiatied a school of thought with its own beliefs, doctrinal interpretations, and implications. Martin Luther may have sought to modernize the church. And yet his efforts led to over a hundred years of war raging throughout Europe.”

A subsequent study undertook to categorize all these influences. It examined the influence of Al-Afghani, his student Muhammad Abdo, and his student Rashid Rida on the idea of ​​the group in which religion appears as “a latent force that must be revived and put to use.”

After this intellectual preparation, the time came for practical application. First through the legal circumvention that Qutb employed to reinterpret Qur’anic verses. Then other studies offered models which analysed the sources in Yusuf al-Qaradawi’s books and their various shifts according to changing political circumstances. The book’s scholars assess how it was affected by the literary sources  on the one hand and the organizational sources on the other. These latter were represented in the Islamist founding generation, as well as the subsequent generation of Abu al-Ala al-Mawdudi, who was accompanied by al-Qaradawi during his visit to Egypt and read his works in translation.

Tunisian thinker and academic Muhammad Al-Haddad presented an analytical review for the sources of Rashid Ghannouchi’s book titled “Public Freedoms in the Islamic State”, in which Al-Haddad critiqued both initial and methodological terms. He addressed Tunisian source of authority and expressed surprise at its absence from the book that went beyond the unanimous Tunisian constitutional experience, even as the Islamist sources of reference were present in force. These last were led by Mawdudi, whom Ghannouchi described as a pioneer of constitutional law scholars. The review concludes that the book comes “in the framework of the debates within the Islamist movements and the international organization of the Muslim Brotherhood. The axis of these debates is determining the best ways to gain, share, and retain power”.

The book also examines the basic sources of Malik Bennabi’s thought (1905-1973). Classical sources (except for Ibn Khaldun (1332-1406) and Ibn Taymiyyah (1263-1328)) are absent in his writings; meanwhile, contemporary German notions about the concepts of nation, unity, and collective spirit abound. The book was also influenced by historicist philosophy, challenge-response theories, and the approaches to religious thought over history by Hermann de Kesselring (1880-1946). Despite his disagreement with the Brotherhood, Sayyid Qutb, Malik Bennabi dreamed of effecting a coup d’état, as Al-Fadil Al-Wartalani did (1900-1959).

However, the study did not mention that Malik Bennabi noted the alleged apprehension of the Lebanese researcher and academic Radwan al-Sayed, in a press interview in 1971, that represented in “the new Protestant trends in religious thought are moving towards clashing with regimes in the rest of Muslim countries”.  As for its impact on the Algerian Islamist movement, the researcher put limits to this in the salon that he held for his followers and students. He also provided a framework for some cadres in the university mosque, and led an anti-Marxist movement.

Some essays were drawn from a collection of selected articles by Saudi intellectual and historian Ali al-Amim, in which he addressed cognitive confusion and source fabrication in Islamist writings.

In conclusion, the Al-Mesbar Center thanks all the researchers involved in the book, notably our colleague Ibrahim Amin Nimr, who coordinated the issue, and we hope that you will be satisfied with the fruit of his efforts and the team.