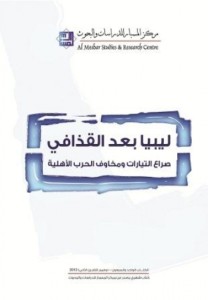 In its 71st monthly book, Al-Mesbar Studies and Research Center addresses Post-Qaddafi Libya, with a special focus on the history of Islamist groups there; an analysis of the current situation, as well as of the turmoil Libya witnessed during the revolution that led it to the brink of a civil war; and a look at the outcomes of the elections in the country. Researcher Nasreddine Al-Saidi studies the phases of development of the Islamic Group (Al-Jama’ah Al-Islamiyah) fighting in Libya, as well as its sources and outlets. Mustafa Abdullah Abu Al Qassem tackles the evolution of the relationship between the Muslim Brotherhood and the authorities. Al-Arabi Bella focuses on the conflict between Islamists and liberals in the midst of the elections. Bella examines the present and the future of the country, highlighting the state-building process. Nabila Ben Yussef examines the revolution’s fallout and the risks of a civil war—pointing out that the revolution nearly transformed into a civil war—and then enumerates the impacts a civil war would have both internally and externally. Additionally, the volume includes an exclusive interview with renowned anthropologist Emmanuel Todd, who discussed his book A Convergence of Civilizations (2007) co-authored with Youssef Kourbage. Analysts were stunned by the book, which predicted long before the upheaval of the Arab Spring that fundamentalism was not a fate for the Arab World and that dictatorships were doomed to collapse.

The Pandemic: Developments in Society, Politics, and the Economy